Last weekend, we took the kids to a climbing gym about an hour away. We’d seen the ads for the place and wanted to try it for at least a couple of years. I am so glad we finally made the time to do it. It was a great day of family bonding. 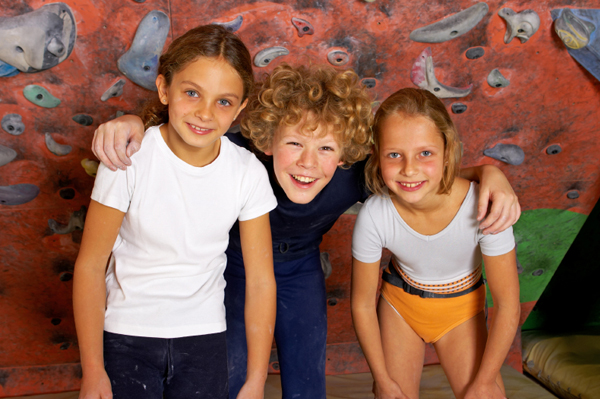 Years ago, my husband used to do a little rock climbing with friends. Nothing too serious. I’ve watched but never really felt like I could do it without making a complete fool of myself. Alfs had been to this climbing gym once before and had a blast. Woody had no idea what to expect. Sunshine, either.

When we walked in, we were totally impressed with the place. Almost every surface was covered with hand-holds and routes for every skill level. We quickly read and filled out the requisite release forms and paid for our beginner packages.

After being fitted with rental shoes, harnesses and helmets, our designated belayer led us to one of the easier walls to give us the safety run-down and allow each of us to start to get the hang of things. Sunshine thought she might want to try it, and at four she is the youngest they work with, but I think she was more concerned that she could be included (as opposed to being specifically excluded) and that was enough. She watched with wonder as her parents and brother tried their first wall, but had no interest in really going up herself.

Alfs and Woody did great, easily scaling the first (relatively) shorter wall. The belayer kept a close eye and appropriately tensioned rope. Then my husband went up the first time, and I swear he must be part spider. I was not as graceful going up, but I did my best and was able to get fairly high (as long as I didn’t look down).

A whole building of goals

After that first wall, we could choose any wall and route we wanted. We could try anything. We took turns and we each challenged ourselves, each going higher than we thought we could. We were empowered and we were strong. We each had our moments of feeling nervous, usually when we looked down, but we got past them. And we went higher.

Our time was up much too fast; we let my husband make the final climb. He went all the way to the top of the tallest wall, figuring out a fairly challenging route. The kids (and I) watched in awe. Part spider, I tell you!

The trip to this climbing gym was very much worth it. We’ll do it again – and we won’t look down.

10 Simple ways to bond with kids

Comforting Sensory Body Socks That Will Soothe Your Child

Stage Two Baby Foods Your Little One Will Love