Finally, I had to have a frank talk with her about this and admit my shortcomings. I assured her that when I was ready, I would approach her. She was mortified… for about five minutes, and the very next week — she asked me if I was ready for a playdate yet!!! I spent the last weeks of the semester ducking behind cars and hiding behind trees whenever she approached.

Related story Motherhood Helped Jamie-Lynn Sigler Open Up About Her Multiple Sclerosis: 'I Was Tired of Making Excuses'

She comes. She eats. She plays. 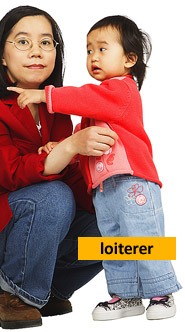 She leaves. It’s over before it even began. Although it was mercifully short, you can’t help but wonder, “Is that it?” Of course, she doesn’t call ever again, leaving you to obsess over what went wrong.

She seems like so much fun at first, but then her quirkiness rapidly becomes alarming. One mom invited us to her house for a playdate and gave us a tour of her house… and it was a shrine to all her dead pets. She showed us the elegantly engraved urns where she kept her kitty’s ashes – in the pantry. And in the backyard, there were rows and rows of tiny crosses marking each grave for all her dead goldfish. She explained in loving detail how she placed each dead goldfish in a silk-lined, jewelry case (so it wouldn’t biodegrade) and about their memorial services.

By the time she offered us a snack, I hastily made up an excuse and left. I was too afraid to find out what other dead animal remains she stored in the fridge. I haven’t reciprocated that playdate because I’m too afraid to let her know where I live.

This mom is an unconventional soul who flouts all the parenting rules. Her fearlessness is what attracts the more angst-ridden moms initially.

She’s unafraid to tell a teacher off or call out another mom on the playground and you think that’s cool – at first.

But what started off as refreshing quickly devolves into narcissism. She doesn’t call when she says she will. She flakes out on playdates at the last minute and stands you up. She’s exciting, but she’s emotionally unavailable, and don’t you deserve better?

There’s not much to say about this mom except that she’s just so very nice. Her kids are super nifty and neat. Her home is immaculate and her snacks are lovingly homemade. She’s always ever-so-perky and sweet and earnest. She’s also soul-crushingly boring because she has nothing interesting to say. She doesn’t even have any juicy gossip, because, well, golly-gee — that’s not nice.

She’s not the monogamous type and likes to make each playdate a group encounter. Forget about an intimate coffee with this mama, she’s all about variety. Each playgroup is a bacchanalian scene where moms and kids are sprawled all over the house and in each bedroom. Toys, sloshed juice, cookie crumbs and socks are strewn everywhere.

>> See all of Minsun’s columns

In my time, I’ve eaten lots of stale goldfish and sucked down many a lukewarm juice box in order to find my playdateable Princess Charmings. Heck, I’ve even fallen in love with entire families – imagine that! But it’s undoubtedly grim out there, and whatever you do, don’t leave home without your trusty NSAIDS (non-steroidal anti-inflammatory drugs) of choice and an emergency exit strategy.