Like color-blindness, CFS Syndrome is a predominately male affliction. The main symptom is a frustrating form of object blindness for mundane household items and personal effects used on a daily basis. 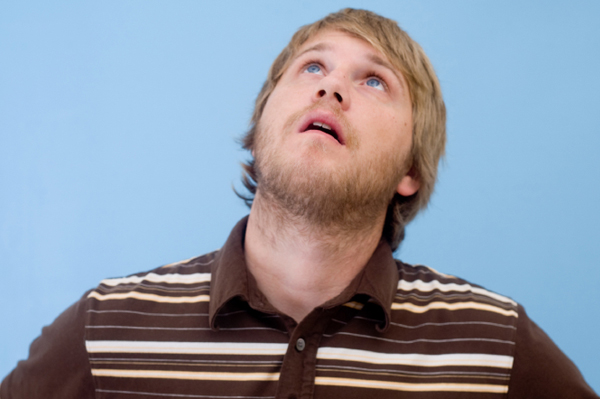 When the desired object is not immediately located with a cursory glance, a peculiar paralysis occurs, rendering the sufferer helpless and unable to function. Immediate intervention from a female household member is required to locate the “missing” item, which is inevitably right in front of the afflicted individual’s nose.

Those suffering from this disorder fail to grasp that the simple concept of looking involves a visual exercise where one must rotate their eyeballs up, down, left, right and around. The efficiency of this exercise is enhanced when combined with neck and head rotations.

Even more radical, the art of looking also involves a third motor component, with your hands and using them to move other objects aside that this missing object might be under or behind. Mastery of this third component appears to be the most challenging.

Nowhere in the non-existent mommy handbook was it mentioned that 50% of my duties would entail being a one-woman Lost and Found. As you can tell, I’m kind of bitter about this unexpected time suck. But as the only XX chromosome in my family, I’ve been designated as the official CFO (Chief Finder of Objects). I know that I’m an unwitting enabler by my search and retrieval, but it’s futile to resist.

A typical day in the life usually begins with the frantic countdown in the morning to get dressed, breakfasted and out the door in time to drop my oldest son off at school by 8:00. And every morning, there’s the same mad search for my son’s backpack and shoes. My husband, bless his heart, will make a lame attempt at looking and then inevitably come looking for me. He has suspiciously little trouble finding me, even though I am hiding, and calls out, “Sweetie, where’s Jonah’s backpack? It’s not by the front door where it usually is.”

And this is where I’ll sigh and try to quell the facial tic twitching dangerously above my left eye. Sometimes I’ll try to suggest alternative locations in the house to check, since I keep hoping against hope that the practice will be a form of occupational therapy. But we all know that this is just a little charade and that eventually, I’ll have to come out and find it myself.

>> The single life: What are married women missing?

What really gets my undies in a Gordian knot is that I’ll usually find the backpack a foot or so away from the front door. Sometimes it’ll be on the fireplace hearth adjacent to the door or thrown across an armchair (also right by the front door).

“It’s right here!” I’ll splutter incredulously. “How could you miss it?” But my husband will shrug and simply say, “It wasn’t where it was supposed to be.” This line of reasoning just baffles me. There’s no place for the fantasy of object permanence in a house with an 18-month-old and a 6-year-old. If it’s not nailed down, it gets moved. That dream belongs in the parental pile of discarded dreams somewhere next to sleeping through the night, weekend getaways and peace of mind.

Yet recent studies suggest that gender differences in spatial abilities are real and not merely apocryphal. Males demonstrate superior navigation-related spatial and projectile throwing abilities. In other words, while men may be better at reading maps and throwing baseballs, they’ll never be able to find those items and use them.

>> Men and women differ in brain use during same tasks

By contrast, females demonstrated significantly superior abilities in recalling objects that were present and the locations of objects relative to each other. This skill explains why you can unerringly track down the last pair of black, round-toed, stack-heeled boots in your size at the Bloomingdale’s chaotic clearance rack… yet get lost on the drive home.

Evolutionary psychologists theorize that these differences reflect our highly-evolved origins as hunter-gatherers. Men did the hunting while women did the gathering. Hunting required a good sense of direction, as well as a singular, laser-like focus in order to track prey for many miles and many days without getting distracted. A doggedly determined tunnel vision, if you will.

Meanwhile, food gathering required the ability to recall the fixed locations of resources. Females needed the superior ability to scan their surroundings and quickly learn the objects in their environment to gather food. So it paid off to develop a good memory of where they saw that abundant blackberry bush and to notice landmarks or other details in relation.

While there’s some consolation in knowing that this is actually a real phenomenon with some science backing it up, it doesn’t alleviate the day-to-day grind of actually living with the poster children for CFS Syndrome. I don’t anticipate a cure anytime soon, either.

My 18-month-old son said his first sentence the other day, and of course it was, “Where da cah?” Translation: “Where’s the car?” Instead of oohing and aahing, I gnashed my teeth and groaned in agony. “No! No! Not another man in the house who can’t find anything!”

I could go on and on about this all day. But I’ve got to go help my son find his damn car.

18 hrs ago
by Kyunghee Kim