When the kids are disciplined for various reasons, I insist, after we have all calmed down a bit and discussed what has happened, that they apologize for their behavior to whomever has been wronged. For the most part, the practice of this remorseful action is what I am after; often – and particularly when they are being disciplined for inappropriate actions toward one another – I know full-well they are not remorseful for their actions, but only for having been caught and/or disciplined. I can hear it in their voices.

Related story Keeping your cool when kids act out 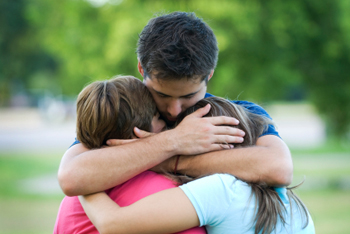 Sometimes, though, I can hear in those same
voices that I have gotten through to them, that they are sorry and recognize the error. I can feel the difference. I discuss this with them, too. I talk about how this difference seems to shine
through when each truly and honestly considers whether he has treated the other like he would want to be treated (the good ol’ Golden Rule in action). I talk about times that this consideration and a simple, honest “I’m sorry” could
have stopped hurts and changed later actions.

Too many people don’t know how to say “I’m sorry.” I know that’s a broad generalization, but I believe it to be true. Acquaintances, family members, friends, neighbors, strangers – many
people in all our lives have a difficult time admitting that they could have done something that caused a hurt, or even admit that a wrong has occurred. For some people pride is the issue; for
others it’s embarrassment; for still others – well, I just don’t know.

I’m no perfect example in this exercise. I’ve made mistakes, plenty of them. I’m sure there were a mistake or two (or 20 or 1,000!) I didn’t even realize I’d made! I know there have been
moments when I’ve felt so monumentally stupid over a (usually fairly innocent) blunder that I’ve become tongue-tied when I should have swallowed that feeling and just said those two words. Then I
am sorry for two things: the original blunder and the subsequent bumbling. It’s a downward spiral from there.

When the boys’ actions require an apology, I try to talk to them about how, though their actions cannot be undone, the right and meaningful words can help heal hurts and help them learn how to show
empathy for others. I also think about where each boy is developmentally and try to tailor discussions and examples to their relative levels. The depth of conversation with Alfs would not be
appropriate to Woody, and the kind of conservation I might have with Woody would seem too simplistic for Alfs.

Can I teach my kids remorse? I don’t know. But I think I can lay a foundation for kids to learn about right
and wrong and about feelings, their own and those of others. I can:

My kids, for the most part, are good kids. They don’t intend to cause hurts, but they sometimes do. Just like the rest of us.