Some 5,000 parents are in court this month in a new class action lawsuit that claims thimerosal — a preservative that contains the toxic chemical mercury that was found in childhood vaccines through 1999 — caused their children to develop autism. 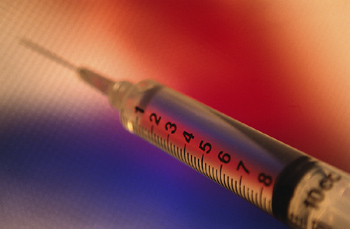 Many of these families have been waiting for a trial date for almost five years.According to news reports, the suit is being held in a “federal vaccine court” that’s designed to adjudicate cases against vaccine makers while protecting the industry from bankruptcy. Should the court find in the families’ favor, damages will come from a government fund.Meanwhile, the family of a Georgia girl will receive compensation from a federal fund designed for people injured by vaccines. The Poling family, who settled out of court, claims that five simultaneous vaccinations in July 2000 led to Hannah’s autistic behavior. She was about 18 months old at the time. According to an AP news article, US officials reject the idea that the vaccines cause autism, but they say that in this particular case, the shots worsened an underlying disorder that led to autism-like symptoms. Although several major scientific studies have found no connection between autism and thimerosal — which is present in the required measles, mumps and rubella vaccine that children must have before starting kindergarten — the suit references the growing rise in autism diagnoses over the past 10 years. They hope the court finds validity to their claim that this increase is a direct result of mercury-laced vaccinations.Studies have shown autism levels in the United States rose from one in every 10,000 births in the 1980s to one in every 166 births in 2003, according to the New York Times, a figure which will be referenced in this case. The parents will establish that their infants began receiving higher doses of thimerosal in 1991 when several new shots containing the preservative, including a hepatitis B vaccine, were administered along with the measles, mumps and rubella vaccine. They contend that the total amount of mercury present in the combination of vaccines exceeded government regulations. A study conducted by the Centers for Disease Control in 2003 that analyzed over 125,000 children born between 1991 and 1999 refutes such a connection between autism and thimerosal.To rule in favor of the parents, according to the Associated Press, the court only needs to find “a link between autism and the shots is more likely than not,” and does not require scientific proof in order to rule in favor of the parents. Any decision will have little bearing on vaccines currently administered to children, as thimerosal was removed from all routinely administered childhood vaccines in 2001, according to the New York Times. Although critics of the vaccine believe the decision came too late, government health agencies, pediatricians and researchers say the vaccines were always safe, explaining that autism rates remain just as high today as they were before.Parents of autistic children are divided on the issue, some placing the blame squarely on vaccinations while others believe other causes (such as combined genetic and environmental factors) are more likely the cause. This is the source of much heated debate.