If you think dating in your teens and twenties is hard, just try dating at any age when you have kids! But that doesn’t mean it’s all bad news. Here are some idea and information to make the experience as productive — and painless — as possible.

According to the US Census Bureau, in 2000 there were 9.8 million single mothers in the US. This means that today there are roughly 10 million women out there who are either entering into new relationships, or trying to. 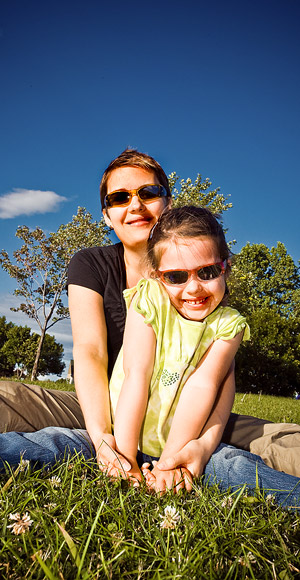 Entering into the dating game with children in tow is a daunting task, not only because you risk getting hurt yourself, but so do your children. Sarah McDonald, 32, has a six-year-old son named Jamie, and she says that being a single mom is a lot harder than she thought it would be.

So, do you have kids?

“When I meet someone, I never know whether or not to tell him I have a child straightaway or not,” says McDonald. “There’s the chance that he will turn and run immediately or — even worse, wait until he has actually met Jamie and then disappear.”

If you’re dating online, Joanne (not her real name), a mom from California, suggests being up front in your profile about having kids. “You don’t have to say how many kids you have or how old they are, but I would definitely recommend mentioning it up front,” she says. “For a lot of guys, no matter how wonderful you are, the fact that you’re a mom is simply a deal breaker. You really don’t need anyone who has a definite bias against children to get in touch — it will just be a waste of your time, and usually disappointing, too.”

Friends in a similar situation advised McDonald to take things slowly and to remember that she any decision she makes will impact both her life and her son’s. She also says that although she is more than ready to date again, and goes on occasional dates, she finds the whole “single mother on a date” thing intimidating.

“I am also always slightly suspicious of a man’s motives in dating a single mother,” McDonald says. “While I don’t want Jamie or myself hurt, I don’t want the man to get hurt either, and if he is looking for a ‘ready-made family’ and things don’t work out, then it’s likely we will all land up getting hurt to a certain degree,” she says.

Is your child ready?

“Jamie is and always will be my main priority — even though the older he gets the more difficult it is for me to go out on dates,” says McDonald. “He is now aware I am going out at night and is not comfortable with it.”

In her book, The Parenting Bible, Robin Goldstein, PhD, says that it is common for kids to have a hard time if their single parent begins to date. They may complain, sulk or otherwise act out their discomfort and unhappiness.

She also says that most children resent their parents’ dating because they believe it makes a family reconciliation less likely, or they might worry about receiving less attention once the parent begins dating. In a sense, your child feels abandoned as his single parent focuses time and energy on a new companion.

Joanne, who has a teenage daughter, had had a different experience. “Now that she’s old enough to understand the whole dating/relationship thing, the fact that I go out sometimes and meet guys through online dating sites really is embarrassing to her,” she laughs. “I find that for right now, the less she actually has to think about the situation, the better.”

Go ahead… but be mindful

Dating, whether you are a single mother or a childless woman, can be a tricky business in the best of times… and no matter how good your intentions, things often go awry. With children in the equation the stakes are definitely raised, but it needn’t mean that single mothers shy away from dating for fear of getting hurt, or having their children hurt again.

By taking the relationship slowly, letting your children get used to your new partner and not compromising on the amount of quality time spent with your children there is no reason why you can’t find — and enjoy — a fulfilling romantic relationship as well as be a good mother and provider for your child.

Some women find it simpler to only date other parents — he knows the drill, understand the commitment of time and energy that is required, and won’t be wanting or expecting to be with you every moment — he has his own kids to attend to. (And if he has kids and doesn’t attend to them in a manner up to your standards… well, you’ve just saved yourself a lot of time and heartbreak by realizing that now.)

One rule doesn’t apply to you

The usual “no cell phone rule” for dates doesn’t apply to parents. Now this doesn’t mean you can take calls during your date from your mom or best friend — it’s for kid-related calls only. Set your phone to vibrate and keep it in your pocket or, if you’re sitting, perhaps tucked slightly under your leg. If you need to take a call, simply explain that it’s one of your kids — and keep the call as short as possible. (If your potential honey gets huffy, you might want to take that as a sign that you’re not a good match.)

Of course, tell the children and their babysitter not to call (or text) unless it’s super important, and remind them what that means. For example: No whining calls, no calls to break up arguments or to tattle, and don’t keep calling to ask, “When are you coming home?” (Be sure to let the kids know in advance how long you’ll be gone.) Don’t hold your breath, though, that this will stave off the inevitable phone call to ask for something — which really is more to hear your voice than anything else.

Tips for single moms on the dating scene

Andrea Engber, creator of the nationwide column “Single with Children” has the following advice for single mothers:

One thing that’s for sure: You’re probably not going to meet anyone right for you by sitting at home with your kids. You have to be open, get out into the world sometimes, and be willing to give some new things a try. No, it won’t always be easy — but when it really works, you won’t regret a single moment that it took to get there.