Every parent experiences the heartbreaking frustration of being unable to understand or soothe their crying infant. In this excerpt from Crying Baby, Sleepless Nights, author Sandy Jones helps parents identify the source of their child’s suffering, and take steps to alleviate it. This reassuring guide to the many causes of infant crying enables parents both to make their babies happier and to cope better with their own emotions. 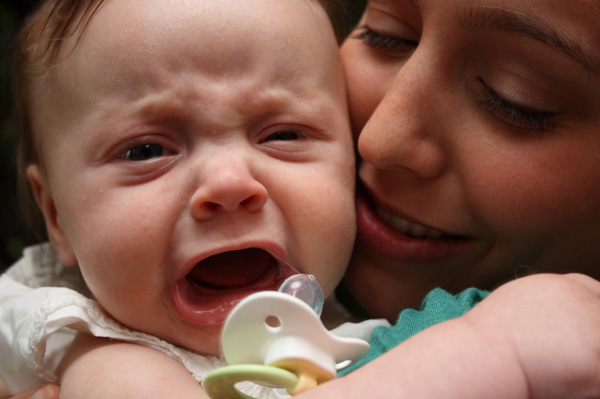 Tips for handling your newborn

Some babies cry a lot more than others, even though they may be perfectly healthy and their parents very experienced in handling infants. The amount of time your baby spends crying each day may be less than it seems. Though you may feel that your baby is crying twenty-four hours a day, if you carefully record his actual crying times you may discover that his crying isn’t really nonstop. Understandably, your feelings of frustration and helplessness may make it seem that your baby cries endlessly.

Will you spoil your baby by carrying her too much, by answering her cries too quickly, or by getting into the habit of going to her when she wakes up over and over during the night? A lot of parents worry about this — especially when their babies are extra-demanding. Fatigue can make you question whether you’re falling into a trap of being manipulated by your baby. Doctors and relatives may try to convince you that you are.

“Maybe I’m being too soft on her. Maybe my baby needs to be shown who’s boss,” you say to yourself. So you stop going to your baby when she cries, or you chide her for making demands. But she only cries harder and longer.

Research has shown that parents who are the most afraid of spoiling their babies are the most likely to produce children who act spoiled. By taking longer to answer, these parents get accustomed to the crying, and so distance themselves from their babies even more. The baby’s trust in her caregivers begins to erode, which makes her quicker to cry and harder to soothe. Eventually she grows into a clingy, overly demanding, and insecure toddler.

Parents’ attitudes even during pregnancy can affect how they respond to their babies after birth. One study showed that expectant parents who said they were hesitant to pick up babies for fear of spoiling them were more liable to produce babies who cried long and frequently than were expectant parents who believed babies’ cries should be answered right away.

Studies have also shown that the longer a parent takes to answer a baby’s cries, the longer it takes to soothe the baby. The critical cutoff point for answering a baby’s cries is a minute and a half. If a parent takes longer than a minute and a half to answer, the amount of time required to quiet the baby increases by three, four, or in some cases fifty times.

Your baby doesn’t “learn to sleep”

Your baby’s sleeping patterns change naturally as his body’s systems mature. Newborns aren’t equipped with day-night body cycles; they alternate between sleeping and waking throughout the day and night, regardless of what is happening around them. It’s not until about the fourth month after birth that the typical baby spends most of the day awake and sleeps longer stretches during the night. By then, the baby’s bodily cycles–of high and low temperature, heart rate, and urine excretion, for instance–have become more regulated. The start of sleeping through the night coincides with the appearance of day-night rhythms and the excretion in the baby’s body of an important hormone, cortisol, that helps to regulate metabolism.

You can’t teach your baby to sleep through the night; it isn’t a skill that can be learned. But when the time is right, your baby’s inborn master clock will set all of his internal operations in harmonious cycles, and his day and night rhythms will become more predictable.

Shared sleep is good for parents, too

Ironically, the very thing that most parents do to get more sleep results in their getting less sleep. Typically, parents decide that they can sleep better if the baby is in another place, and so they put the baby in a crib in a separate room. The baby becomes frightened by the isolation and cries out to bring the parents close. A parent, aroused from sleep by the crying, gets up and feeds the baby, who goes to sleep in the parent’s arms. The parent returns the baby to the crib and goes back to the other bedroom to sleep. The baby sleeps until hunger pangs and loneliness arouse him again. The baby cries, the parent is aroused, and so the night passes.

Instead of getting more sleep, the parent actually gets less sleep this way than if the baby were within arm’s reach. A breastfeeding mother can nurse her baby without getting up or even waking fully. She need not sit up waiting for the baby to finally fall back into a deep sleep. And many parents have found that sleeping with their babies decreases the frequency of night wakings, so the parents themselves get more rest.

You can test this idea yourself by taking your baby into bed with you for a few nights to see if his night waking and crying are reduced. You may want to make some notes on his behavior first, so you can accurately compare his sleep patterns in isolation and in your bed.

By giving in to your baby’s inborn need for closeness, you may find that you not only help him conserve his energies for emotional and physical growth, but you conserve your own energies as well.