Researchers at the Center for Injury Research and Policy at Columbus Children’s Research Institute on the campus of Columbus Children’s Hospital recommend four key safety tips, based on the results of several new studies, to help keep children safer during winter sports. 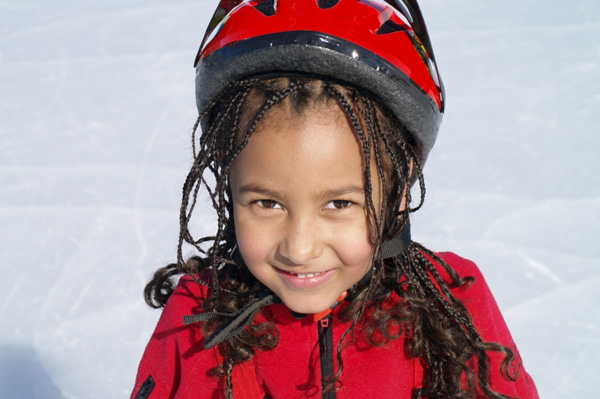 The majority of serious injuries are to the head. Wearing a helmet is the most important — and easiest — way to increase safety in winter sports.

2. Scope out the route

In many of the studies, collision was the leading mechanism of injury. Parents are encouraged to walk the sled route to be certain there are no obstacles that could cause injury.

Collisions occur more often when activities take place in crowded areas. Parents should use common sense when evaluating safe space for their child to engage in the activity.

Though accidents can still happen when parents are supervising, parents are generally more adept in identifying dangerous scenarios. Additionally, they can assist in getting medical attention quickly should an accident occur.

Many injuries can be avoided

“Examining injury patterns among five different winter activities-skiing, snowboarding, sledding, ice hockey and ice skating-we identified that the number one injury is to the head and neck region,” says Gary A. Smith, MD, DrPH, pediatric emergency medicine physician at Columbus Children’s Hospital, director of the Center for Injury Research and Policy (co-author of all the studies) and associate professor of pediatrics at The Ohio State University College of Medicine and Public Health.

He adds, “Many of the head and neck injuries we reviewed could have been avoided if the child was wearing a helmet. As the cold weather approaches, winter sports will become increasingly more popular among children, and it’s important that parents are reminded of this important safety measure.”

Major importance of simple helmet use

Sledding: “When we examined the circumstances for sledding-related injuries among children ages two to 18, we identified that the most common injuries were to the head and neck region, and only three percent of the children were wearing a helmet,” says Smith. The results also showed that the most common mechanism of injury was collision with a stationary object. After an injury, reported helmet use increased.

Ice skating: A study comparing injuries among skateboarders, rollerbladers and roller skaters with injuries among ice skaters also determined the need for helmet use by children. “Head injuries occurred more frequently when ice skating than other types of skating,” says Jennifer McGeehan, MPH, project manager and researcher in the Center for Injury Research and Policy. “Though helmet use is most often recommended — and sometimes even required for some skating activities — a majority of the children in the study were not wearing protective equipment (helmet, elbow or knee padding) at the time of the injury.”

Skiing, snowboarding: In a study that looked at fatal injuries among skiers, Huiyun Xiang, MD, MPH, PhD, research faculty member of the Center for Injury Research and Policy and assistant professor of pediatrics at The Ohio State University College of Medicine and Public Health, found that traumatic brain injuries were the leading cause of death among child skiers between the ages of seven and 17 years. Collisions, most often with trees, were the leading mechanism of injury. A similar study comparing non-fatal injuries among skiers and snowboarders also found traumatic brain injury to be the leading cause of serious injury for both sports.

How (& When) to Find the Right OB/GYN Mid-Pregnancy

Sturdy Kid Dressers That Will Last Through Their Teen Years