Why is your child — who seems perfectly normal — all of the sudden banging his head on the wall every time he gets mad? (And no, he’s not listening to hardcore music when you’re not around.) Get some information about this worrisome but not uncommon toddler behavior here. 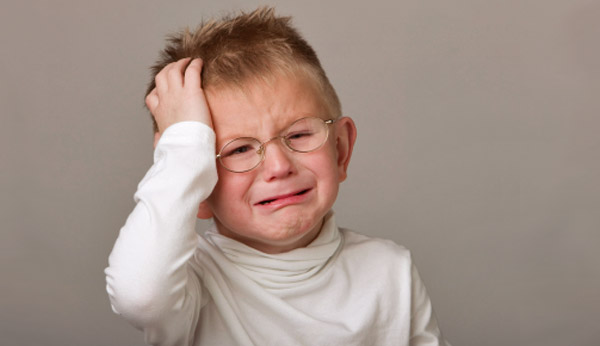 My son is almost a year and a half old, and has started to bang his head on the wall or the floor when he’s mad or frustrated. We try not to react too much, but we are shocked! He’s an only child and I don’t know where he would learn such a thing. What’s going on — does he have a real problem? Could this be a sign of autism? – Nora in Michigan

Believe it or not, this behavior is very normal in a pre-verbal child, especially in a boy. At not quite 18 months old, your son does not have the verbal skills to express his frustration with the realities of the world and his own limitations, so he makes his feelings of displeasure clearly known to you. You and your partner are brilliant not to express your horror at your son’s head banging, because this non-reaction will help to decrease this behavior.

Given how hard kids can bang their heads, it’s hard to imagine but head banging is generally not dangerous to your child, and normally does not indicate that he has autism or another neurological or psychological disorder. (Read more about autism here).

As for where he would learn to bang his head without a “role model” — it is probably something he figured out all on his own. It should remind us of how innate it is for humans to express our frustration in any way we can.

It is one of your jobs as a parent to help your son more properly channel his anger or frustration. You can start by having other activities ready for your son which are less frustrating to him, so when he starts banging his head, you can focus his attention on a better option.

If — overall — your son is happy and accomplishing regular milestones of development there is typically no need to worry. However, if the head-banging increases in severity or frequency, or accompanies other odd behavior, sadness or developmental delays, I recommend speaking to your child’s physician.

Assuming your son is otherwise healthy and happy, there is not much too that you can do as parents to help except to keep him safe until he is ready to give up banging his head.

In the meantime, during head banging episodes, work to redirect your son to different activities, and perhaps teach him less hurtful ways to express his frustration (such as stomping his feet or yelling into a pillow). You may also want to learn to walk away from him — as long as he’s not hurting himself — so he doesn’t continue to do it to get your attention and/or sympathy.

Finally, know that as your son’s speech and language abilities increase, this head banging will very likely decrease.

Good luck with this difficult situation!