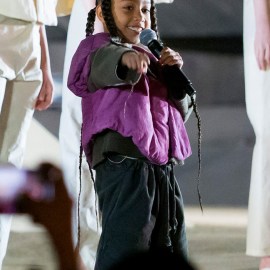 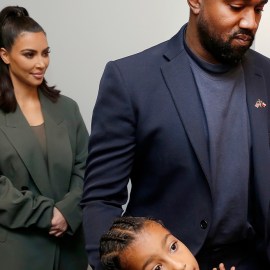 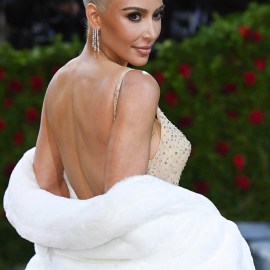 Few things in life are better than bedtime snuggles, and that’s a truism Kim Kardashian acknowledged in a recent post on Instagram. Sharing two snaps of her kids Chicago, Saint, and Psalm in bed side by side, she captioned the snap, “nothing better than these snuggles.” The kids were adorable wearing bright pajamas — and one pair of Halloween ghost jammies — as they snoozed in a lavish, neutral–toned bed outfitted with plenty of pillows.

The little ones were basking in some attention from their mama Kim, though it’s her oldest, North, with whom Kim is collaborating on a special TikTok project. Kim and North have launched their own TikTok handle, @kimandnorth, where they share all manner of fun behind-the-scenes moments including a hangout with Lizzo at the singer’s concert in Los Angeles and a cute moment of Kardashian-Jenner cousins bonding while doing aunt Kylie Jenner’s makeup.

An interest in social media clearly runs in the Kardashian family, and between glimpses of snuggle pictures and Kim and North’s outings, they’re also sharing excitement for the upcoming holidays.

On Wednesday, North posted a platform-appropriate video on TikTok of herself lip-syncing to “All I Want For Christmas Is You.” The music moment came after North and Kim shared a video of Kim getting a Grinch-themed makeover. And on Tuesday evening, Kim kept The Grinch fandom going by sharing a quick Instagram story of the Christmas classic playing on a flatscreen.

There’s nothing quite like the holidays in the Kardashian-Jenner family. Last year, Kim revealed that she brought in family friend Philip Cornish to her home every single morning in December to play live Christmas music on the piano to wake her four children up in the morning.

While that particular routine of morning music may be hard to top, we’re sure Kim and grandma Kris have something up their collective sleeves. But first — business calls! The family wraps up the second season of their show The Kardashians with a special finale airing tonight.