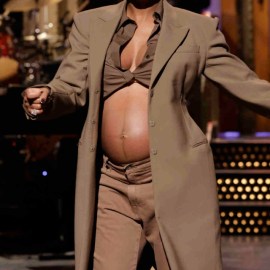 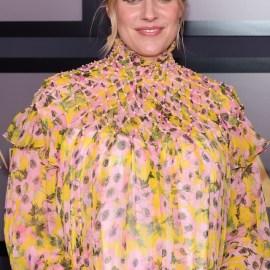 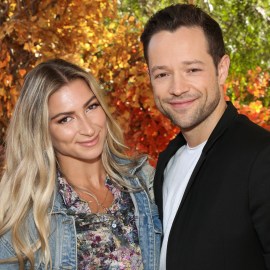 All the Celebrities Expecting Babies in 2022 53 Images

Hilary Swank is basking in the second-trimester glow. The Alaska Daily star announced she’s expecting twins with husband Philip Schneider on Good Morning America yesterday, and she also appeared on Live with Kelly and Ryan, revealing she’s “feeling great.” Swank added, “It’s such a blessing. It’s a total miracle. It’s unbelievable.” And in a new interview on The Drew Barrymore Show premiering tomorrow, she also reveals her twins’ significant due date.

“You just announced that your father has passed away one year ago,” host Drew Barrymore told the Million Dollar Baby actress in a preview of the October 7 show, per Us Weekly. “And this miracle is happening.”

A teary-eyed Swank nodded her head and added, “Yeah, and they are due on his birthday.” That is so beautiful! Nothing can replace the loss of a loved one, but welcoming two new babies into the world on her dad’s birthday is a super special way for Swank to remember her dad. It’s a unique connection that they’ll always have to the grandfather they never got to meet.

Barrymore opened her mouth in shock over the revelation, which prompted Swank to say, “Yeah, I know, it’s like [wow].” It seems like a sign from above — her dad is always with her.

Swank’s dad Stephen Swank was born on April 16, which would make her twins Aries babies if they are born on the same day. She shared photos with him in 2016, writing on Instagram, “Happy 70th Birthday to my Dear Dad. Your strength, courage and kindness inspires me beyond. I love you more than you could ever know. 💝”

In a 2018 appearance on The Late Show with Stephen Colbert, per Entertainment Weekly, Swank gave revealed her dad had recently underwent a lung transplant.

“It’s the hardest surgery a person can undergo and I thank all the people that make themselves a donor, it saves lives,” she said. “They had given him a short time to live if he didn’t get a lung transplant and thankfully he got one and he’s alive and thriving and well.”

She said she took three years off “to be with him and help him through that life journey.” What an incredible story!

I can only imagine the tears that were flowing when Swank heard his official due date was the exact same date as her dad’s birthday, especially after spending three years taking care of him before he died. It just warms your heart!

Many stars commented on her post, including Kate Hudson who wrote, “What what what!!! Yeah ❤️❤️❤️❤️ congrats my friend 💫.”

“Congratulations!!!! So so happy for you ❤️❤️,” Katie Couric wrote, and Chelsea Handler commented, “Yeah, babies!”

Emmy Rossum wrote, “👏👏👏👏👏.” The Shameless star, who starred alongside Swank in 2014’s You’re Not You, also defended Swank to haters. When one person commented something really mean about Swank’s age (48), per Page Six, Rossum clapped back with a “Gfy,” which means, “go f—k yourself.”

It cost exactly $0 to be nice people. Maybe just keep your unnecessarily mean comments to yourself and let Swank and her doctors worry about the health of her pregnancy, OK?

Despite the haters — and the emotional moments — Swank seems over-the-moon happy about her pregnancy news, and we can’t help but smile, laugh, and cry with her. It’s just so exciting!

These celebrity parents are on double duty!

25 mins ago
by Sydni Ellis

How to Teach Kids Gratitude — Not Entitlement

49 mins ago
by Claire Gillespie

19 hrs ago
by Nicole Witt