It’s a truism of parenting (for me, at least), that the older your kids get, the more tightly you want to hold on to the sweet holiday traditions they loved when they were little. Example A: The Easter Bunny, who still makes a yearly visit to our home despite the fact that my kids are 10 and 15. Bryce Dallas Howard is right there with me. The Jurassic World Dominion star, whose kids Beatrice and Theodore are also 10 and 15, understands the sentimental power of a chocolate-filled Easter basket.

“There’s something about Easter that’s very nostalgic and you kind of want to experience again and again what you experienced for your first Easter,” she says. We’re talking about tweens, teens, and traditions at Lindt’s Gold Bunny Easter event just ahead of the holiday, and Howard, who has also directed episodes of The Mandalorian and The Book of Boba Fett, is explaining how her kids’ Easter baskets have not, in fact, changed over the years, adding that there’s a consistent visual motif “that feels very familiar year after year.” Chocolate bunnies included, of course.

That love of holiday traditions is one of the few things that hasn’t changed for Howard throughout her parenting journey. The actor, director (and, of course, daughter of Hollywood icon Ron Howard) has been open about suffering from postpartum depression after her son’s birth, and says becoming a mother taught her to lower her expectations, let go of perfectionism, and learn “to be someone that would let go of something or an idea because it wasn’t serving my family, it wasn’t serving my children, it wasn’t serving me,” she explains. “That was a huge growing experience for me and very humbling.”

With her younger sister Paige by her side, Howard chatted with SheKnows about all things Easter, the parenting rule she let slide during the pandemic, and the one work-related thing that would really impress her teenager. Keep reading! 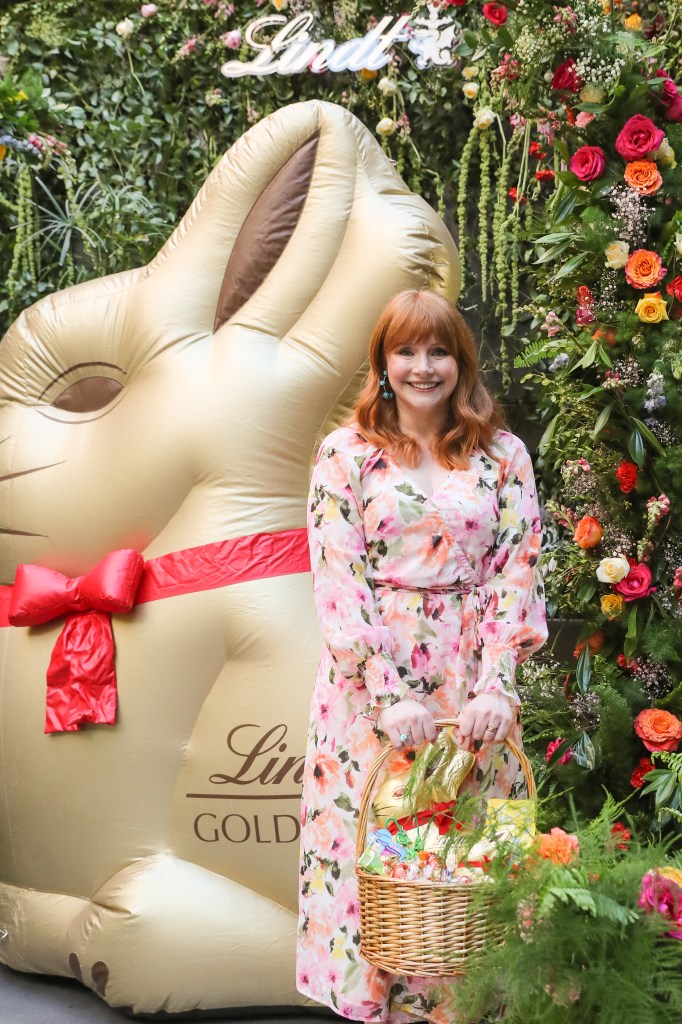 SheKnows: How are the tween and teen years going for you as a parent? What are the biggest joys and challenges?

Bryce Dallas Howard: So far, so good — which is great. Because of the pandemic and them not having gone to school for so long… the last couple of years just felt sort of special and more like a reflection of how it was when they were younger. We got to extend that time, which is really nice. Now the kids are back in school and I’m like, ‘Oh my gosh, I have a teenager and a pre-teen!’ it is wildly apparent and it’s fun.

I can celebrate them wanting to have independence and all of that because of what the last two years have been like. But I would say that a lot of the traditions that got started during the pandemic have continued and we’ve been closer as a family. And so going into the teen years with that bond, I think that’s one of the positive things that came out of this time.

SK: What are some of those traditions?

BDH: I think it’s just like, spending as much time together as possible. Even having to do with our work; exposing them like, ‘Oh, I’m going to watch this thing for work right now. Do you want to join?’ I think that there’s a nice codependency that has sustained itself where we’re just all still a little bit joined by the hip. And they’re much better about chores than they’ve ever been their entire life because of the pandemic. So those are good things.

SK: Are there any parenting rules that you’ve let go of in the pandemic?

BDH: We were very strict about access to electronics and media and movies and television and all that kind of stuff. And then when the pandemic hit, we realized early on that they were not going to have any contact with any of their friends if we didn’t somehow give them access. So that was something that we definitely shifted, but because the kids weren’t super hooked before, it was okay. It was sort of refreshing to be like, ‘Oh, okay, we’re being flexible with some of these guidelines and they’re still doing all right.’

We were much stricter in terms of chores and the labor around the house and all of that, and I think also because we were tightening up in that area, there were other areas where we were like, ‘Okay, we’re going to be more allowing with this.’

SK: You mentioned involving them in your work a little bit. Do they care what you do? Are they interested in it?

BDH: There’s only really been one time that we’ve been out together and someone approached me, and it was a little kid and it was sweet. So they don’t have any association with me in terms of being a celebrity, but in terms of working and working on the stuff that I do, they’re actually quite involved. Beatrice is constantly in the editing room because she really likes it — and to the point where [The Mandalorian creator] Jon Favreau was noticing early on, when I was showing cuts of the first season, that Beatrice would get nervous when she didn’t see Baby Yoda. And she would be whispering to me, ‘Where’s Baby, where’s Baby, where’s Baby?’ and John observed that and was like, ‘Oh, we need to make sure that we’re always clocking where Baby is, because the kids will get anxious if they don’t know.’

SK: Maybe the adults, too, you know… maybe.

I kind of grew up in this way, where my dad really involved me and my siblings in what he was doing — sharing the highs and the lows and what he was working on and what he was trying to problem-solve. So getting to bring them into the editing suite or getting to share scripts with them and auditions and all that stuff, it’s really wonderful because they start to have opinions and instincts. It’s so funny because my daughter is very invested and very into it and has a personality like a showrunner, like ‘Oh whoa, you’re not just an artist, you’re an executive.’

And then with my son, he’s so funny… I remember I brought him onto the set for Star Wars and he turned to me and he goes, ‘When are you going to do a Marvel movie?’ And I was like, dude.

SK: Like, can you be impressed by this thing?

BDH: Yeah. I’m like, well I’m never good enough. They’re definitely enthusiastic about all this stuff that I’m working on, but I can tell that I want their approval, as well. I’m like, okay, I guess I’m going to really try hard to get into the Marvel universe, so my son approves of me.

Before you go, read about celebrity moms who’ve opened up about postpartum depression.