What’s the best way to fight the Sunday Scaries? Sometimes it means putting on a gigantic stuffed elephant head to keep the whole family entertained.

And that’s just what Olivia Wilde did this weekend. The mother of two took to her Instagram stories to post a picture of herself decked out in costume, alongside the caption: “That Sunday kind of parenting.” 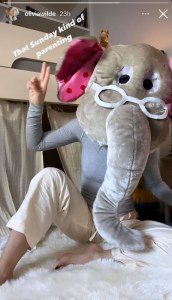 Impressed by her dedication? The actress and director is no stranger to keeping things silly at home and has shared a whole slew of fun parenting pictures on Instagram – including one featuring another cute stuffed animal.

Wilde shares her daughter, 5-year-old Daisy, and son, 7-year-old Otis, with ex-husband Jason Sudeikis. The crew got a sweet shout-out from Sudeikis on Sunday, when he snagged the award for outstanding performance by a male actor in a comedy series at the Screen Actors Guild Awards.

“Thanks to my kids, thanks to, you know, everybody I got to take improv classes with. Do improv shows with, everybody from Second City,” he said. “My cast and crew and generation at SNL. My folks, my family and this chosen family here. So thank you very much. I really appreciate it.”

Otis and Daisy have been along for the journey of their parents’ whirlwind careers, Wilde told Vogue in December. “It’s wonderful to have them become nomadic in the same way I’ve always been — to feel that whatever country we’re in, they have a routine and a community,” she said. “They’re best friends, and they have each other.”

Now all that’s left for us to figure out is where exactly we can purchase an enormous plush stuffed elephant.

Before you go, check out all the ways to keep you sane and your kids busy: