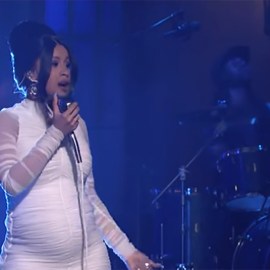 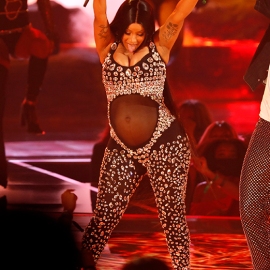 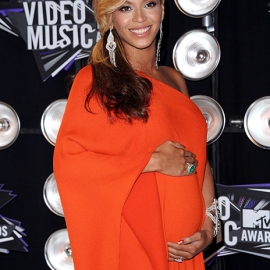 Cardi B, Beyoncé, & More Stars Who Revealed Their Pregnancies to a Crowd 7 Images

When it comes to raising kids, Cardi B always keeps it real, frequently sharing with fans the adorable and hilarious highs and lows of being a mom of two. In a series of early morning videos shared to her Instagram Stories Wednesday, the rapper revealed that her four-month-old son is already hitting some seriously impressive developmental milestones — he’s apparently already quite chatty with his mom and dad.

“This baby is talking,” Cardi shared of her son whom she welcomed with husband Offset back in September (the couple have not publicly revealed their son’s name). “I put this on everything I love in the name of Jesus Christ. First of all, my husband saw it yesterday,” she added.

The rapper also shared that the infant was watching the television series Cocomelon, when all of a sudden he said, “Hello” while singing the song, “If You’re Happy And You Know It.”

“I don’t know if that’s, like, the pandemic thing. I don’t know, like, if this is normal,” she said. “This sh*t is crazy. I need a camera in this room 24/7 or something.” She then turned to her little one off-camera, adding, “Because, yo, you talking and you just turned four months today. You talking for real.”

My son holding his bottle wit both his hands already 🥺😱Im trying to remember if KK was doing that around 3 months old or if this is one of the super powers these pandemic babies coming with.

Last month, in true Cardi B fashion, she tweeted that her baby boy had already begun holding his bottle with both of his hands, adding that she was “trying to remember if KK was doing that around 3 months old or if this is one of the superpowers these pandemic babies coming with,” she joked of her 3-year-old daughter, Kulture Kiari.

All silliness aside, it’s no surprise why Cardi and Offset’s children are responsive to music at such an early age, given they’ve got two talented parents to learn from. A 2020 study from Ohio State University found that babies learn to mimic sounds based on the music they hear, and that infants especially “learn a lot about the patterns of pitches and rhythms in music,” noted Lucia Benetti, a doctoral student at The Ohio State University School of Music and lead author of the study, which was published in the Journal of Research in Music Education.

But if four months sounds awfully early for Cardi B’s little one to be so chatty, data from Nemours Children Health shows that between four and seven months, babies will imitate the sounds they hear, whether through music or talking, and that these are baby’s first attempts at trying to speak which should be encouraged. So it seems like Cardi’s got herself a tiny talkative tot in the making — and he’ll probably sing songs on his own like mom and dad in no time. Too cute!