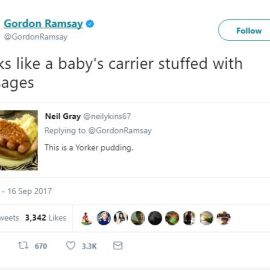 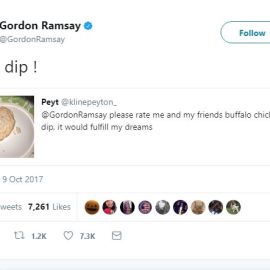 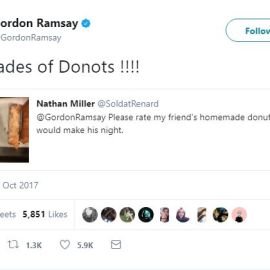 Many know Gordon Ramsay as a hot-headed superstar chef, but he has a soft spot for children — especially his own. After his teenage daughter was fat-shamed by a British radio host, he leapt to her defense.

On Oct. 27, Gordon went on Instagram Live to praise his daughter Matilda Ramsay, a.k.a., Tilly, for standing up for herself after LBC presenter Steve Allen described her as a “chubby little thing” after her stunning performance on the television show, Strictly Come Dancing.  “It made me feel very proud that she stood up and said, ‘I’m not taking this’…She is 19-years of age for goodness’ sake —bursting her a**e off and attending university by Zoom and learning the most extraordinary moves with Nikita [Kuzmin],” said Gordon.

“I think it was a breath of fresh air that level of standing up and saying, ‘We’re not going to tolerate that,'” added the proud dad. “And we agree she handled it like a queen.” Gordon then discussed his own weight struggles: “It is a very sensitive issue, whether you are a girl or a guy. I am someone who has always struggled with their weight.”

Tilly also responded on Instagram, explaining that she’s learning to accept herself no matter what — and we absolutely love that. “…Getting called out on a national radio station by a 67-year-old man is a step too far,” she wrote adding, “I won’t tolerate people that think it’s okay to publicly comment and scrutinize anyone’s weight and appearance.” According to the BBC, Allen has privately apologized to Tilly.

Not just a dancer, Tilly is, unsurprisingly, a food expert. And just like her famous father, she is pretty opinionated. Back in 2019, she released a cookbook for people of all ages called Matilda & The Ramsay Bunch: Tilly’s Kitchen Takeover, available on Amazon for $30.

Before you go, check out our gallery on celebrity baby names we love.