Amber Stevens West picks up the phone at 9:00 a.m., sounding enthusiastic and well-rested as ever — despite having been awake since the crack of dawn. But such is the life of the optimistic actor, who is currently pregnant, raising a 2-year-old, and busy promoting her new show, Run the World.

“No, it’s not Gaga on the phone,” she tells her daughter, laughing. “I’m gonna leave the room so they can play,” she then says to me, leaving her sister, interim babysitter, to occupy the sprightly toddler as we speak.

The 34-year-old Los Angeles native currently stars as Whitney on Run the World, which follows a group of best friends on their romantic, and platonic, endeavors in Harlem, New York. Previously, Stevens West played the fashionable Ashleigh on ABC Family’s Greek — where she met her now husband, Andrew West. She was also Maxine on The Carmichael Show, Claire in Happy Together, and has appeared in films like 22 Jump Street and The Amazing Spider-man.

SheKnows caught up with her to discuss her new series, the importance of diversity on screen, how she’s managing motherhood — and pregnancy — while filming and promoting a show.

SheKnows: Tell us a little about Run the World!

Amber Stevens West: There’s a lot to say about all of it. Basically, the show was brought to me, and they’re like, Starz is making this new comedy. It’s gonna be adult content, where there’s simulated sex and that kind of stuff, and I was like, I don’t know if I’m ready! I’m so network TV, [a] PG-13 kind of person. Then I read it, and I just thought it was so awesome because it was highlighting these four Black women living these like fabulous lives and their close-knit friendship, highlighting Harlem as the fifth lead character in the show, how special that part of like that town is, and how it influences their relationships with each other. And just Black women being awesome. So I was like, “Whatever I have to do to be a part of this.”

Then they told me that I play Whitney, who’s the very type-A personality, wants to follow the rules, does everything right, [and] seems to have everything she could have ever wanted. Yet, she’s still unsatisfied. I was like, I love this character. This is so something I can identify with, being the goody two shoes of the family. So [I] jumped at the opportunity. 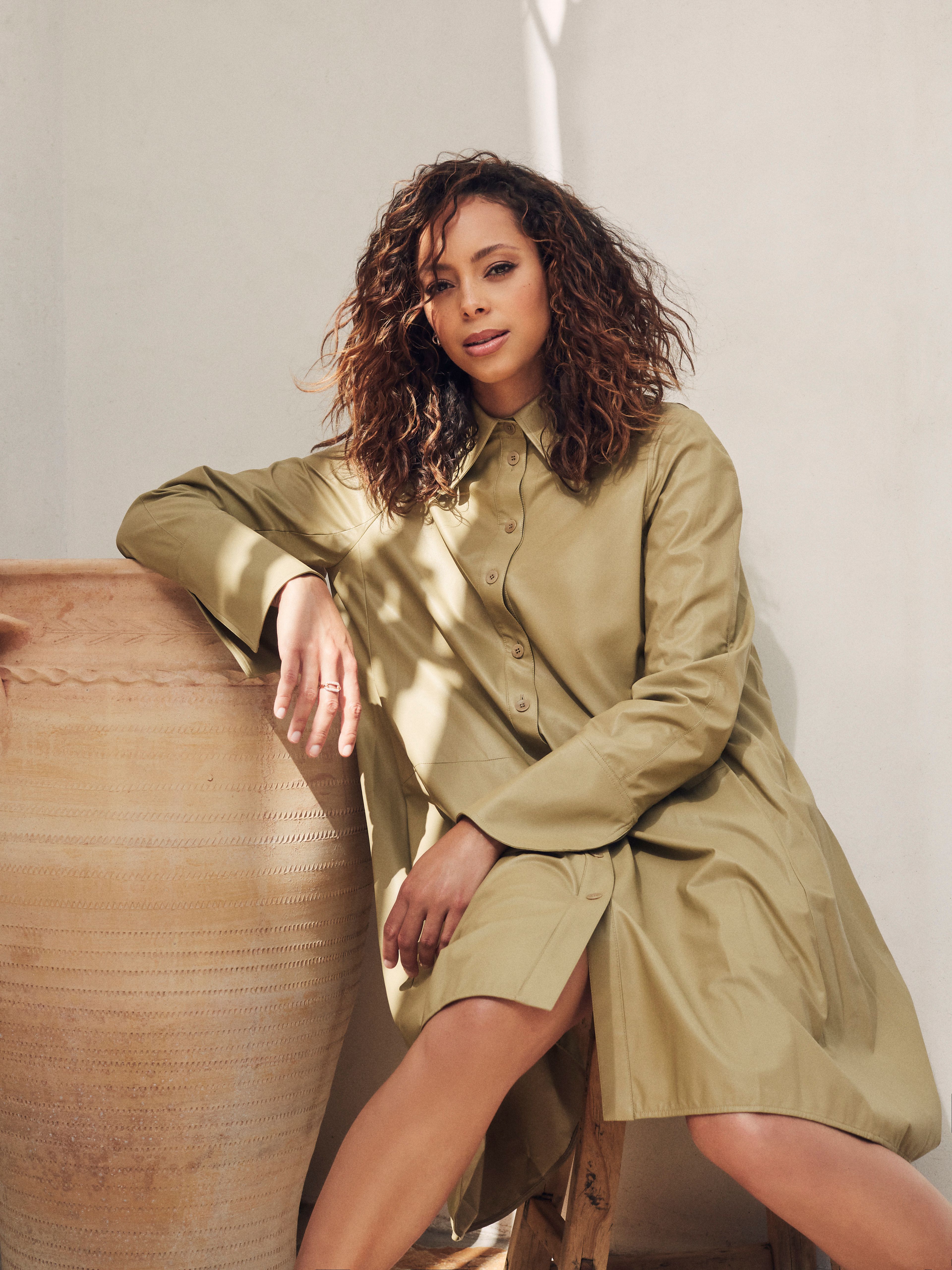 SK: What was it like filming amid a pandemic?

ASW: We did the pilot way back in 2019. Then we found out we were picked up the beginning of 2020. The idea was that we would shoot the eight-episode season in June. Then the pandemic hit, so we were postponed.

Finally, in the end of September, they had figured out what to do with all the COVID protocols, and we were tested three days a week. There were a lot of rules to follow, but we figured it out. Everyone in our crew took it super seriously, didn’t go out or do anything. I think we had two false positives, so we would shut down for one day check, that it was that the person what did not actually have it, and go right back to work, and we finished on time. It was challenging, but we got through it, and now we’ve got the whole season in the bag.

SK: Run the World highlights Black women in Harlem, something a lot of “friends in New York” shows haven’t done before — at least not to this extent. How does it feel to be a part of something so special?

ASW: I love this show. It’s relatable to anybody, man, woman, no matter what color you are, whatever sexual orientation you are, this is just about people and their relationships with each other. But I like that it’s being told from the perspective of four Black women, because I think the more we show diverse people on screen living normal lives, we realize that that is normal, and that we have more empathy for each other. We realize that we are all more alike than anything. Because there’s been stereotypes of what Black people are like, and I love that these four women are so different, even from each other. And yet they’re still very best friends. They live these aspirational lives that people can look up to and say, “I can do it if they can do it,” kind of thing. It’s important to give that kind of platform to other people than just white people.

SK: And, what’s so exciting, is that you’re now expecting a second baby! Congratulations. What’s it like not only being pregnant, but having a 2-year-old at home, while doing all this press?

ASW: I’m leaning on my family really hard. It’s cliché, but it takes a village. My sister’s here right now. She stayed the night with me last night so that I could go out to my friend’s birthday dinner, then woke up with me at 5:00 a.m. to do my makeup so I could do press this morning, and is now downstairs keeping my daughter occupied so I can continue to do this, because Andy [my husband] is out of town, also working [as an actor].

You just have got to ask for help. And it does make me very anxious to think about going back to work if and when we get a second season, because that means uprooting my family, again to New York City from L.A., having a newborn on set, which means someone has to come with me to set because I will be breastfeeding this new person, and then someone else has to stay home. I think my mom’s gonna have to come.

I thank god I have family that’s able to help me. I think that’s all it is. You just have to ask for help, because there’s just no way to do it. You physically can’t be in two places at once. You just got to lean on others.

SK: You were also pregnant while filming Happy Together. What was that like?

ASW: It was scary. I actually was nervous to tell everyone that I was pregnant, because I didn’t want them to think that it was going to change my performance, which is such a stigma. And it didn’t at all. They had to work around my body changing because it wasn’t part of the storyline, but they can figure that out, and they did. That’s not my problem. My personal life is my personal life, and if I want to have a kid that’s my business. So I was really grateful that I was working with people who were excited for me and championed that, and they were up to the challenge of hiding my belly.

And I worked through. I was really lucky. I had a pregnancy where I had a lot of energy, and I was feeling great, and it was really easy for me to go to work every day. This time around … I am quite grateful that I am not currently filming. I am so freaking tired. I’m taking two-hour naps every day. Whenever my daughter naps, I’m like, “Me too!” I’m grateful that I have people that all support me, and hopefully there’s more women in the industry who feel like they can do it, too.

Don’t stop yourself from having a family. Not just in this industry, every single industry. Don’t put your personal life and starting a family on hold because of your job. Because you don’t have to do that. 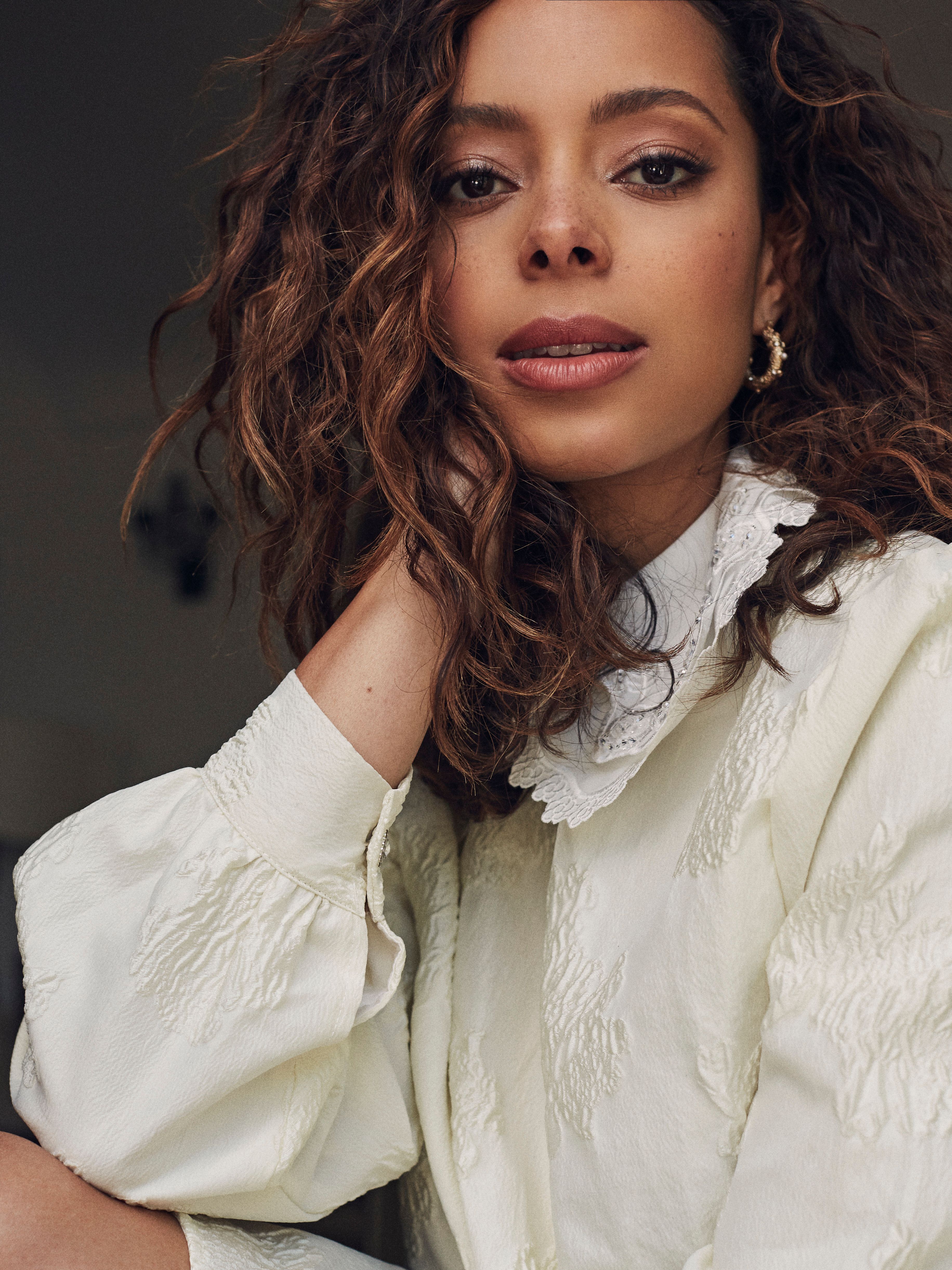 SK: I loved your official pregnancy announcement, because it was adorable, but you also announced you’re making a donation to Black Mamas Matter Alliance because women of color often receive inadequate healthcare, and the rate of maternal mortality due to pregnancy complications is much higher for Black women. What inspired you to do get involved?

ASW: I found out about this group that that supports Black women in their endeavors of wanting to start a family. What really struck me is I didn’t really know about a lot [about it] until I had my daughter, and then people started telling me like, “Black women are not taken seriously in the hospital.” And then a few months after my daughter was born, a girl that I know, who’s also Black, died in childbirth at a prestigious hospital in Los Angeles. She was very young and healthy, and it shook me. It scared the shit out of me, honestly, because you just don’t think it will happen. You’re like, “Oh, it’s probably in like underserved communities,” which it certainly is. But it also was happening right under my nose, here in the biggest city where we’re trying to be the most progressive people ever.

Black women are not being listened to, and it needs more attention. And I’m in my thirties, I’ve got a lot of friends who are struggling with trying to get pregnant. I’m just so hyper aware of how lucky I am that this has worked out so easily for me. I want to acknowledge my privilege in that, and also acknowledge that there are others who need more support.

SK: This brings us back to the importance of a show like Run the World, where you’re giving main characters storylines to Black women, which is somehow still rare, even today. What do you want to tell people who have yet to watch?

ASW: This is not a show just for Black people because it stars Black people. Just like Black people have been watching programming of everybody else since the beginning of time. They can also watch Black people be the star of the show and find something to relate to. The show is not only speaking to the Black experience; it’s just the experience of being a person.

You’re going to laugh with these characters. You’re going to fall in love with their friendships with each other. That was my favorite thing about the show. Not only was it Black women, but it was female friendship, and the support that they had for one another. They’re not at each other’s throats, they’re not in competition. It’s all love, they have so much fun together, and it’s this enviable relationship. That’s my favorite genre of anything. Because I expect that in my personal life, my girlfriends are like that in real life. It’s really refreshing. People should just tune in because it’s a good time, and genuinely a lot of fun to watch!

Be sure to tune in for Run the World, airing every Sunday at 8:30 p.m. Eastern on Starz.