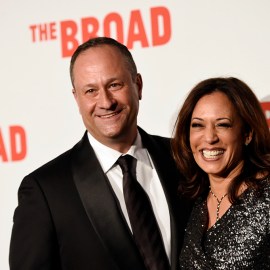 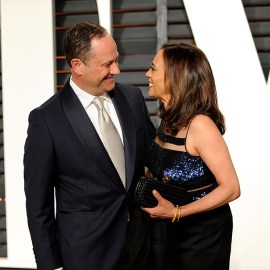 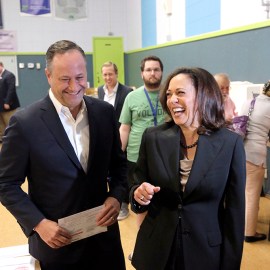 Who’s in Kamala Harris’ Blended Family? Get to Know the Harris-Emhoffs With These Family Photos 20 Images

While Prince Harry and Meghan Markle’s daughter will soon welcome the first royal baby born in the United States, across the pond the monarchy is now expecting another little one in line to the throne. Princess Beatrice and her husband Edoardo Mapelli Mozzi, who married last July, just announced they are expecting their first child together. Beatrice, however, is already a hands-on stepmom to Mozzi’s 5-year-old son Christopher Woolf, from his previous marriage.

Buckingham Palace announced the news in a statement from Buckingham Palace, saying simply, “Her Royal Highness Princess Beatrice and Mr. Edoardo Mapelli Mozzi are very pleased to announce that they are expecting a baby in autumn of this year. The Queen has been informed and both families are delighted with the news.”

Princess Beatrice is the granddaughter of Queen Elizabeth and the daughter of Prince Andrew and Sarah Ferguson, who divorced in 1996. Her sister Princess Eugenie welcomed a baby boy named August in February. Princess Beatrice’s child will be the Queen’s 12th great-grandchild after Harry and Meghan’s baby is born, and will be 11th in line to the throne.

Christopher Woolf, known as Wolfie, is already keeping Beatrice busy as a stepmom and has been welcomed into the royal family.

‘Wolfie is already a very much-loved member of their family and the duchess is very keen to stress that she sees Wolfie as their grandchild too,” a spokesperson for Beatrice’s mom Sarah Ferguson said last year, after Princess Eugenie announced her pregnancy.

If Beatrice needs advice on how to handle being part of a royal blended family, she has several ladies to ask for advice. Her aunt, Princess Anne, raised her children, Zara and Peter, to have close a relationship with their half-sister Stephanie Phillips, the daughter of Princess Anne’s first husband Captain Mark Phillips and his Hawaiian-born second wife Sandy Pflueger. She can also turn to Camilla, Duchess of Cornwall, who married Prince Charles in 2005 and became stepmother to Princes William and Harry.

“Beatrice is a wonderful and very hands-on stepmom,” a source told People last July, adding that Princess Beatrice has “embraced [Wolfie] as part of her life from the outset.”

Another source told People, “Edo is easily one of the best dads, he is so involved, and Beatrice is already showing that she’s a fantastic step-mummy. They’ve been on family vacations together [with his son]. They are really happy.”

Co-parenting with an ex and being the stepparent in a blended family can be a challenge, but it sounds like Princess Beatrice is navigating the situation with the respect and love needed to be a success.

As our favorite stepmom Vice President Kamala “Momala” Harris told CNN’s Dana Bash during an interview at Howard University, “One of the keys to my relationship with Cole and Ella is their mom. We are friends. We have a very modern family. … The thing about blended families — if everyone approaches it in the way that there’s plenty of love to share, then it works. And we have plenty of love to share within our extended family.”