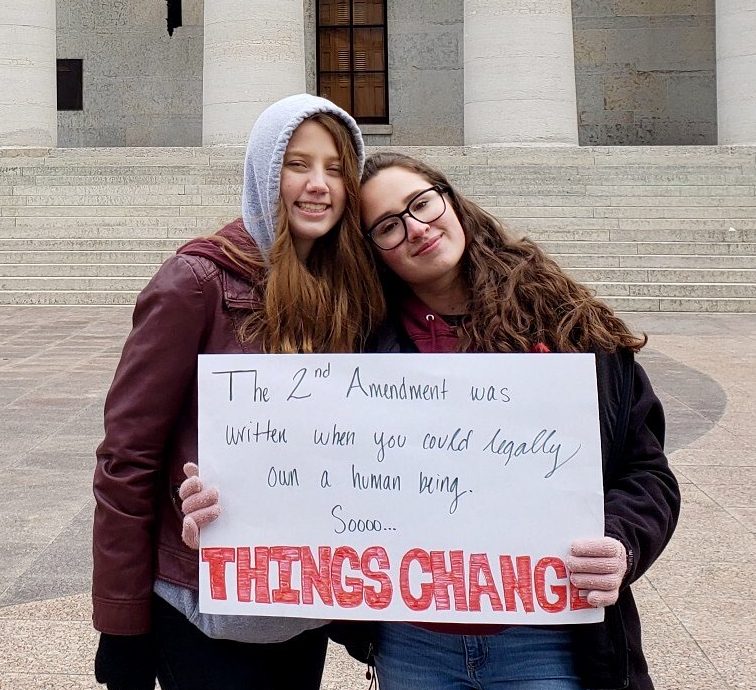 When I was 16, I had to watch my friends die at the hands of a school shooter. Now, I, along with millions of Americans, am being told it never happened.

I walked into Marjory Stoneman Douglas High School on February 14, 2018 worrying about if the red shirt was the right choice; if I would get a flower from my friend despite growing apart; and if my Spanish test would be as hard as the last. By that afternoon, my entire outlook had changed. These simple thoughts were replaced with the question of whether I would make it out alive.

For two hours, I sat in the auditorium worrying each breath would be my last; scared that I’d never again see my sister, who was hiding in a classroom that had been shot at nearby; terrified that an errant cough, a too-loud heartbeat, or an unstifled sob would be answered with gunshots. Two hours — that’s just under 1,500 breaths. That’s 1,500 in — “Am I going to die today?” — 1,500 out — “Please, don’t let this ‘I love you’ text be the last one I see.” I sat there on the phone, in silence, with my dad for hours; my sister did the same with my mom. We all waited for the worst. Fortunately, at least for my sister and me, the worst never came.

I’ve heard the whispers from conspiracy theorists, too: “Oh sure, you definitely went to MSD,” and, “Where’s your Oscar?”

One thing that never crossed my mind during that harrowing day was that if I were lucky enough to escape, I’d be questioned for the rest of my life by people who thought I made it all up. Nor did I ever think that one of those malicious conspiracy theorists would one day be elected to Congress.

But that’s exactly what happened with Rep. Marjorie Taylor Greene.

In the past month, we’ve seen the full extent of Rep. Greene’s cruelty. We learned how she supported the call for the execution of prominent Democratic politicians. We discovered her deadly calls for political violence. And we saw in full her support for hateful, deadly conspiracy theories about the worst day in my life, the day 17 classmates and staff were killed, and 17 more wounded.

Her lies have serious consequences. Survivors of mass shootings have been stalked, harassed, targeted, and assaulted as a result of lies like hers, especially because she’s lying from a position of power. Pictures of survivors’ houses have been posted online with addresses. And whenever survivors share pictures of their family members who were shot and killed, the comments mirror Greene’s hateful disbelief: “Fake kid.” “Didn’t die.” “Liar.” I’ve heard the whispers from conspiracy theorists, too: “Oh sure, you definitely went to MSD,” and, “Where’s your Oscar?”

But Greene’s vile behavior has clearly not motivated House Republican leadership to take any real action.

It’s bad enough that they allow her to remain in the caucus, let alone in Congress. It’s pitiful that the strongest response that House Republican Leader Kevin McCarthy could initially muster in response to her comments was that they’d “have a conversation.” But beyond all of that, the fact that House Republican leadership decided to put a school shooting denier on an education committee is a level of callous cruelty I did not think was humanly possible.

Greene has no place in Congress — that much is clear. But she hasn’t yet shown the ounce of decency required to resign, and to this point, I haven’t seen any indication that House Republicans will have the “political courage” to urge her to do so. The fact that it somehow requires “political courage” to condemn a QAnon-supporting, conspiracy-theory peddling “representative” astounds me.

Back in that auditorium, where all we could hear were muffled sobs, we couldn’t believe what was happening –– but it did happen, no matter what Rep. Greene says. To this day, I’ll still sit with my back to the wall whenever I can, trying to survey whatever room I’m in for threats. Every night, before I go to sleep, I check three times that my door is locked. The trauma, the pain, the sadness, the emptiness – it’s all still with me, and I’m still working through it. I’m not going to sit by while someone who’s supposed to represent us tells me that I’m making it all up.

I’m glad that Rep. Greene is no longer in a key position to influence policies to keep schools safe from gun violence in the House Education Committee (after the House voted to eject her from that and the Budget Committee on Thursday), but that’s not enough. She should resign from Congress, and we must all work to make sure that nobody like her is ever elected again. Congress should honor survivors of gun violence by passing life-saving gun-safety legislation, starting with a bill that would require background checks on all gun sales.

Catherine Allen is a volunteer with Students Demand Action in Florida, an Everytown Survivor Fellow, and a gun violence survivor from the shooting at Marjory Stoneman Douglas in Parkland, FL.

33 mins ago
by Thea Glassman

3 hrs ago
by Karen Johnson