Tom Brady is heading to the Super Bowl for a record 10th time, but amidst the celebration, the 43-year-old Tampa Bay Buccaneers quarterback made sure to share the moment with his oldest son, Jack. “Can I say hi to my son?” Brady could be heard asking as he pointed at Jack in the stands, before climbing up to the barrier to laugh and share a sweet hug with the 13-year-old. “I love you kiddo,” he said. Take a look at the heartwarming moment caught on video, below:

Brady, arguably the greatest quarterback of all time, has certainly shared doting-dad moments with his kids after football victories before. Who could forget the time after Super Bowl LIII when Brady held his daughter with Gisele Bundchen, Vivian, in his arms while talking to reporters after the New England Patriots’ victory? Not us, ’cause we thought it was the best part of the whole evening, to be honest.

But this moment seemed extra-special, because while it extra-firmly cemented Brady’s spot in the history books, he still made sure it was a family affair. And was it ever: Brady’s wife and Jack’s stepmom, Gisele Bundchen, shared a photo of the hug on her Instagram story: 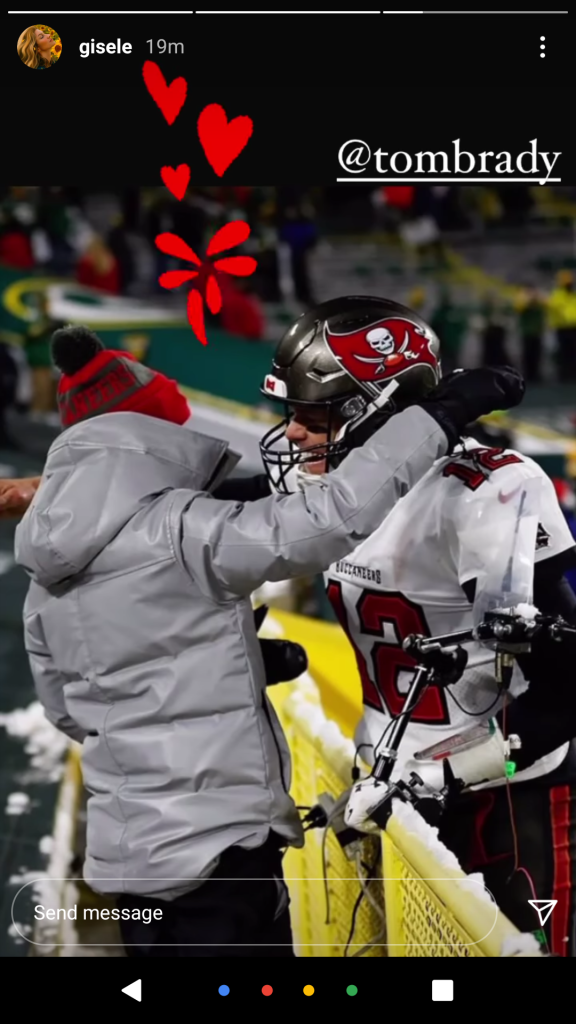 And Jack’s mom, Bridget Moynahan, tweeted her support of her ex, posting two photos of Brady after the game, solo and with their son, and writing, “Could not be more proud @tombrady said he would do it and he did.” This isn’t just a football victory, it’s a co-parenting victory, too.

Could not be more proud @tombrady said he would do it and he did. Congratulations @Buccaneers pic.twitter.com/8UXpu8ZxH9

If Brady and Bundchen’s recent Florida home purchase is any indication, this may not be the last season we see the quarterback in a Bucs uniform. Regardless, we’ll have at least one more opportunity to see Brady play at Super Bowl LV  — and win or lose, we can only hope we’ll also see another heartwarming dad moment from him.

Before you go, check out the best face masks for teens:

24 hrs ago
by Kim Grundy