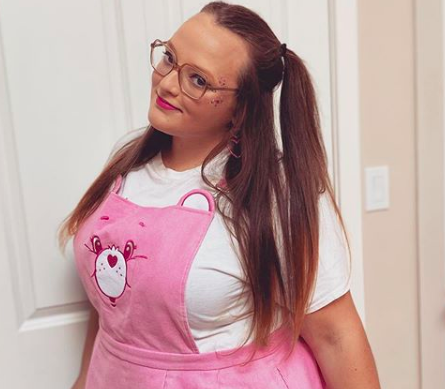 Up until this point, adults have seen JoJo Siwa as a Dance Moms alum, an alarmingly perky YouTube teen, or the reason their children insist on wearing large pink bows and a side pony. But now she may be something a little more meaningful for parents: a gay icon.

The 17-year-old Siwa has been trending on Twitter over the past two days in response to videos posted on TikTok that had fans speculating she was gay because she was lip-synching to Lady Gaga’s “Born This Way.” But it wasn’t until Friday afternoon that Siwa confirmed her sexuality with a post on her Instagram story that said, “Thanks for the shirt @WandaWandaWanda” and showed her wearing a graphic tee with the phrase “BEST. GAY. COUSIN. EVER.”

My cousin got me a new shirt pic.twitter.com/DuHhgRto7b

In response to Siwa’s coming out on social media, she has received tons of comments from parents, teens and influencers showing their love and support.

Twitter user @mattxiv wrote, “OK but the impact of JoJo Siwa coming out to millions of very very young kids and their parents ?? the normalization this has …. a queen.”

That statement makes me so sad. I know what you mean of course but as a mum of JoJo fans, I'm thrilled for her and thrilled for my kids. Their idol is showing them they are able to just be who they are. Its pretty special and I hope everyone recognises that.

After someone marveled at the bravery of a children’s entertainer coming out, mother Nicole Cherie agreed, in the best possible way: “As a mum of JoJo fans (6 yr old girl and 4 yr old boy) I could not agree more. JoJo was already a wonderful role model to them and now, she is even more so. She is living her best life, she is proud to be who she is and that is exactly what I want my kids to be.”

My 12yo daughter just ran through to tell me. She was psyched! This is the generation that will hopefully, finally, accept people for WHO they are, not who they choose to love ❤️

Another mother tweeted how her daughter was psyched to hear the news about Siwa.

“My 12yo daughter just ran through to tell me,” @AsenathMagic wrote. “She was psyched! This is the generation that will hopefully, finally, accept people for WHO they are, not who they choose to love.”

I’ve known you a long time and this is the happiest I’ve ever seen you. You’re absolutely glowing and I’m so proud of the woman you are becoming! love yoooou! 🌈 https://t.co/d57S8aWcsh

Siwa also received support from members of the online community including YouTube star and mother Colleen Ballinger (aka Miranda Sings).

Others speculated that Siwa initially posted the “Born This Way” video so that parents who wanted to shield their children from the existence of gays would be able to tell them she was just lip-syncing and nothing more. (As for any critics of Siwa’s decision, we’re just not going to give them a voice in this space.)

🐸☕️I know homophobic parents are shaking in their dang boots right now bc JOJO siwa came out as gay !
(Us gays always…

While many parents are praising this young star for her bravery now, it was only a few weeks ago that many were outraged at her for selling an “inappropriate” board game. The game, which required participants to answer questions from a deck of cards, included questions such as, “Have you ever gone outside without underwear? (A bathing suit doesn’t count.)” The game was pulled from shelves and Siwa apologized, saying she had been unaware of its content.

Now, Siwa is winning back the hearts of parents with her newest message of authenticity and will continue to do so moving forward.

We love celebrating these out and proud celebrity parents.