While so many of us at home are begging our kids just to finish their science homework, we might want to show them Time’s Kid of the Year, 15-year-old Gitanjali Rao. By going beyond her classroom to invent cyberbullying software, research ways to decontaminate water, and inspire other young people to become innovators, she’s earned herself the cover of a magazine, an interview with Angelina Jolie, a TV appearance, and more. Actually, we parents can learn a thing or two from Rao too.

“I was always someone who wanted to put a smile on someone’s face,” Rao, who lives in Lone Tree, Colo., told Jolie. “That was my everyday goal, just to make someone happy. And it soon turned into, How can we bring positivity and community to the place we live? And then when I was in second or third grade, I started thinking about how can we use science and technology to create social change.”

As a mother of teenagers, Jolie was particularly interested in Rao’s work on cyberbullying, an AI-enabled chat app and Chrome extension called Kindly. The extension allows users to monitor their own language on Twitter and other social media platforms.

“You type in a word or phrase, and it’s able to pick it up if it’s bullying, and it gives you the option to edit it or send it the way it is,” Rao explained. “The goal is not to punish. As a teenager, I know teenagers tend to lash out sometimes. Instead, it gives you the chance to rethink what you’re saying so that you know what to do next time around.” 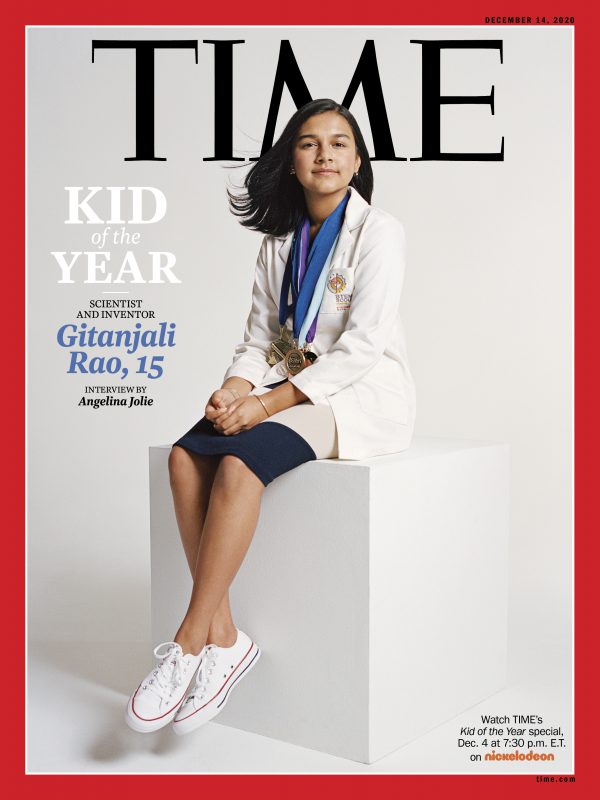 Giving this sense of control to teens intrigued Jolie.

Rao agreed that she’d have the same reaction.

“But a lot of the teenagers were telling me that, you know, it doesn’t seem like I’m being micromanaged; it seems like I’m being given an opportunity to learn from my mistakes,” Rao said. “So that’s what I was super-excited about, that they understood what the goal of it was.”

This demonstrates how important it is to have kids involved in solving the problems that affect them most. That’s why she’s also determined to get other young people to follow in her footsteps.

“My goal has really shifted not only from creating my own devices to solve the world’s problems, but inspiring others to do the same as well,” she said. “Because, from personal experience, it’s not easy when you don’t see anyone else like you. So I really want to put out that message: If I can do it, you can do it, and anyone can do it.”

And while she’s creating “innovation workshops” for schools and organizations around the world, she is also continuing her work on gene-based therapy to detect bio-contaminants in water, AND something to detect prescription opioid addiction. Reminder: She is 15.

Head over to Time to see how Angelina Jolie’s mind is also blown by this girl. And tune in with your kids on Friday night at 7:30 to Nickelodeon’s broadcast of Time’s Kid of the Year special to be inspired by Rao and other impressive kids.

Start inspiring children when they’re young with these books starring girls of color.