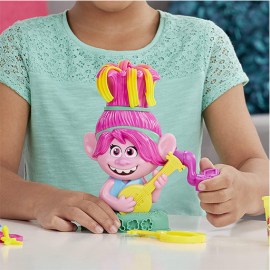 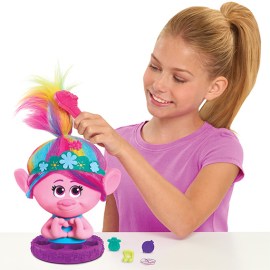 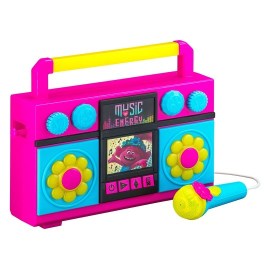 Like so many other working mothers this year, Megan Hilty is exhausted. Since the pandemic began, the Smash and Broadway star has been busy, between caring for (and homeschooling) 6-year-old daughter Viola and 3-year-old son Ronan, participating in virtual musical fundraisers to help out the struggling theater world, and still working as a voice actor for kids TV shows. But also like so many of us, she’s grateful for being busy, and especially for her role in the new TV show Trolls: TrollsTopia, now streaming on Hulu and Peacock.

Related story Dear White Parents: Are You Still Talking to Your Kids About Race?

The show picks up where Trolls World Tour left off, after Queen Poppy and her friends learned about all the other types of Trolls and their preferred musical genres. Now Poppy wants to invite all the other Trolls to come live together in, ahem, harmony.

Hilty, who plays Holly Darlin’, the big-haired ambassador from Country land, is well aware of just how much we could all use a little lesson in living with each other’s differences. She called SheKnows to speak about TrollsTopia, how she’s teaching her kids that lesson, and how she’s been keeping it together in 2020.

SheKnows: I am always impressed with anyone who had the foresight to be involved in an animated project this year. How did you make this perfect pandemic career move?

Megan Hilty: I made the conscious decision to make a real push to get in the world of animation about 12 years ago, and it was really important to me to make that a big part of my career. It’s tough to get into. I always I just always thought that was the ultimate cool job for an actor or a singer to be a part of that process. I’m so fascinated by all of it, and I have been since I was a kid. I think all of us that were raised on Disney movies … wanted to be involved in something like that. It’s just it’s so magical, and it still is to me.

And now more than ever, honestly, I don’t know I don’t know what I would have done without the jobs that I have in animation. Most of my jobs have gone away because they’re live performances for large groups of people sitting close to each other.

SK: Is there a different criteria you use when choosing projects with young audiences, now that you’re a mom?

MH: In general, no matter if it’s live on camera work or if it’s animated, anything that I do now, one of the biggest boxes I have to check off is, Will this make my kids proud? If somebody that they go to school with [sees this], will they be proud of it, or will they be ashamed? So luckily, TrollsTopia makes me a hero. They’ve gotten to see several of the episodes, and they’re just obsessed. 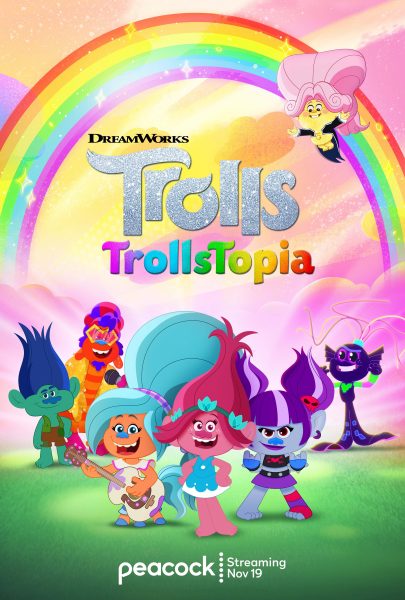 SK: The overarching theme of the show is about people learning to live with each other’s differences. What do you teach your kids about that?

MH: I feel like we talk about it all the time. I think that’s something that that should be talked about from a very early age. When you talk about stuff all the time, then you just have a better vocabulary and an ease. … I’m super proud to be a part of something that that spreads that message at this moment in time — and really any moment in time.

SK: Is there anyone or any resource you turn to for guidance for talking to your kids about differences, racism, and other difficult topics?

MH: Sesame Street has been really awesome. They have some great programs that make topics easy to approach. I think the important thing when I’m talking to my kids about stuff like that is that we just take our time, and I answer the questions that I can answer. And then I’m honest if I don’t really know how to answer anything, and we try to figure it out together. The most important thing is just to keep a conversation going.

SK: Have you been your children’s home-school teacher?

MH: Ugh, my poor children! I am like the worst-paid teacher’s assistant, and I’m totally not qualified for this job either. I’m not equipped to really teach somebody how to read and how to do basic math. It’s really kind of thrown me for a loop. But I feel like it’s bonded me and my daughter a little bit. Any time things get frustrating, we have this safe word where we have to acknowledge that something has gone off. So we have to take a pause and run around, do something else, and come back. … Oddly, it gets really frustrating to teach someone something very basic without just giving them the answer. People go to school for many, many years to learn how to hone those skills. And that is something I did not do.

SK: What are your go-to family activities this year?

MH: We’ll get up really early in the morning and go to the beach when nobody’s there, We’ll go to these huge, sprawling gardens that we can just run around in. And we don’t see anybody but my best friend. Luckily, she’s really close with my kids.

SK: When you’re all at home together, do you have family singalongs?

MH: Yes. It is fun here because my husband’s a guitar player, so there’s always music, whether someone’s playing or someone’s singing. My daughter is constantly singing from the minute she gets up to when she goes to sleep. She has this crazy ear; we try not to make a big deal out of it, but her pitch is crazy. She’s great. My son, on the other hand — it took us a while to figure out he even was singing. But he’s a little dancer.

SK: I know that you’ve been doing a lot of fundraisers for actors struggling with the shutdown. What do you think you’d be doing right now if you didn’t already have an established career?

MH: I don’t know! And I honestly don’t know what I would be doing if I didn’t have things like TrollsTopia. Which is why even though I am exhausted — I’m everything at home; I’m the teacher, I’m the cleaning service, I’m a laundry service, I’m a caterer — and then when they go to bed, I feel like I’m slapping on makeup and curling my hair and making videos, asking for money for organizations. Because who knows? Maybe one day I will need to have that, and I will need those services.

SK: Does that ever make you think about like what kind of career advice you give to your kids? Would you tell them not to go into the arts?

MH: I always joke that I won’t let my kids do the same thing as me, but that’s not true. I want them to do whatever they are passionate about. Because that’s most of it, right? I mean, the rest is kind of magic and luck and other people saying yes. They have to have some kind of drive for whatever it is they want to do, and I will totally be behind them 100 percent.

These stars also know how to talk to their kids about celebrating each other’s differences.

38 mins ago
by Allie Merriam

42 mins ago
by Elaine Roth