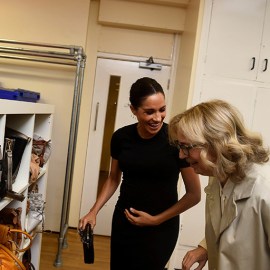 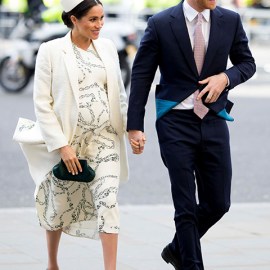 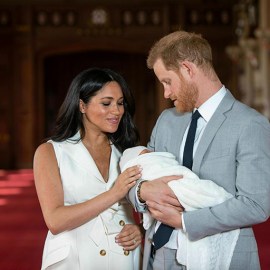 When we talk about the fact that Meghan Markle and Serena Williams are good friends, there is an unsophisticated corner of our minds that wishes we will one day peek in on Archie and Olympia’s playdates. In the meantime, our higher-minded selves will have to be content with watching the conversation the Duchess of Sussex just had with Williams’ husband, Alexis Ohanian, about how they hope to make the internet a safer, more inclusive space for when their little ones (and all other children) are old enough to use it.

Markle and Prince Harry hosted a live Time100 Talks session on YouTube in which they interviewed various experts in the digital space about how to make it more compassionate, safe, and trustworthy. The first guest was Reddit co-founder Ohanian, who shares something significant with Meghan and Harry, as the duchess noted.

“I know we have shared experiences of being in interracial marriages and raising small children who are of mixed race and how that plays into [our mission],” Markle said.

Ohanian was honest about how much Williams and his daughter were to thank for his mission to improve the world, particularly when it comes to increasing racial diversity in Silicon Valley and tackling inequalities elsewhere.

“It is disappointing to know that so much of this perspective [on race] I really only got after I started dating, but certainly once I married my wife, and once we had our daughter, it really leveled it up to another place,” Ohanian said. “I’ve had so many moments in my life where I was given the benefit of the doubt, where I never felt unsafe, where I always felt heard, where I did not realize until I was in a relationship with someone who achieved as much as she has and still regularly deals with this in painful, frustrating ways. As a husband, you just get outraged, and then especially now in the role as a father, I just can’t help but want to create a world that is fair to my daughter. And I know that that’s lofty, but it’s a thing worth striving toward, and I’m going to work every day to get a little better.”

Hugging loved ones even harder today.

One step Ohanian took to do that was stepping down from the board of Reddit earlier this year to make room for a Black person to take his place. It may seem strange to make a move like that for a 2-year-old girl, but his explanation is so perfect: “I knew that I had a responsibility to be able to answer her when she asked me in 10 years, when she’s a snarky teenager, what I did to be a part of making things better for her?”

Markle also spoke Ohanian about another company he’s invested in called, Sentropy, which has developed artificial intelligence technology to be able to find and eliminate hate speech, harassment, and threats from social media. Doing so doesn’t just help protect the targets of such speech, but it also makes business sense, he argued, as it keeps other users from leaving the platforms they view as hateful places.

We can imagine Markle would like to use some of that AI on the tabloids that have harassed her for years.

As they concluded the interview, Markle also took the heart of their mission back to their kids.

“Thank you for doing the work and leading the way, not just for all of us, but for your little girl, for our little boy,” she said.

These celebrity parents are having real conversations with their kids about racism.