When preparing for their third baby, some parents go low-key and subtle — who has time while also raising two other kids? Not Jade Roper Tolbert. Whether it’s because she’s an influencer mom or she’s just so darn excited about baby #3, she is making this a production worth watching. The Bachelor alumna recently staged an angelic pregnancy shoot (literally), and she has enlisted all her followers’ help in naming the baby boy with a fun, bracket-style tournament of baby names, much the same way she did with son Brooks.

“Felt like an angel mother goddess yesterday thanks to @tiffanyallenphotography and @leahmariacouture and this beautiful baby growing inside of me,” Roper Tolbert wrote on Instagram, sharing a behind-the-scenes video  of the shoot, in which she looks like a gorgeous, knocked-up Victoria’s Secret Angel, in bra, underwear, and giant, feathered wings. “Can’t wait to see the photos! This is (probably, most likely, trying to convince myself) our last baby, and I wanted to celebrate my body for all the amazing things it’s done these past 4 years of growing and loving and nurturing my babies.”

Roper Tolbert has had two miscarriages, so she has extra reason to celebrate her healthy pregnancy, and if that means elaborate photo shoots, we are not here to judge.

Felt like an angel mother goddess yesterday thanks to @tiffanyallenphotography and @leahmariacouture and this beautiful baby growing inside of me. ❤️ Can’t wait to see the photos! This is (probably, most likely, trying to convince myself) our last baby, and I wanted to celebrate my body for all the amazing things it’s done these past 4 years of growing and loving and nurturing my babies.

But she and husband Tanner Tolbert are actually asking us all to judge them, or their baby name choices anyway. Since it worked when they were naming baby #2, they decided to repeat the social media stunt of putting their favorite baby names to a vote … or many votes. They narrowed their list down to a Sweet 16: Reed, Cohen, Westley/West, James, Dean, Roper, Callum, Rivers, Jack, Atticus, Forrest, Porter, Landry, Baker, Connor, and Thatcher.

Roper Tolbert seemed a little surprised by how passionate her followers have been about certain names.

“We’re mostly doing this bracket for fun and to give you guys some inspiration,” she said in her Instagram Stories. “And if you hate every single name on the list there’s this really cool thing called you’re not the one having a baby.”

People are feeling very invested when their choices lose. That’s when she felt the need to explain that she’s not really letting this tournament be the last word on her baby’s name. 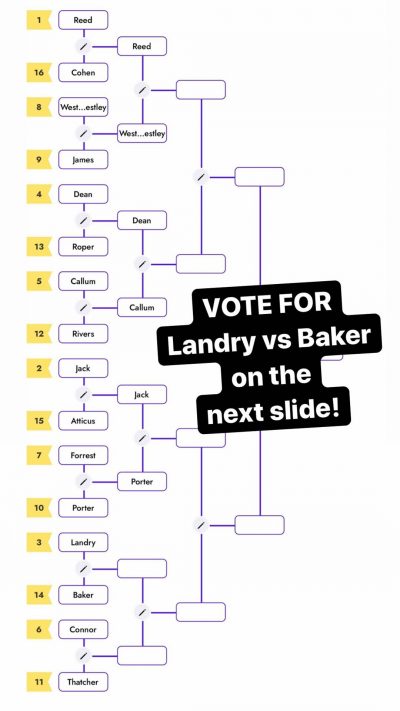 “I’m getting so many messages from people devastated that Roper didn’t make it,” she said. “You never know we still could use it as a middle name. … I’m very about the baby’s soul when I see him If he feels like a Roper, maybe we’ll name him that!”

With votes happening twice a week, she still hasn’t narrowed the list down to eight, but on Monday said she would start increasing the pace, since she’s already at 31 weeks. So far, the list includes, Reed, Westley, Dean, Callum, Jack, and Porter, with the matchups of Landry vs. Baker and Connor vs. Thatcher still pending.

Sure, this is a rather unconventional way to pick a baby’s name. But when you think about it, nearly every way of choosing a name is a little funny, so why not this?

Would the internet have chosen these unusual celebrity baby names?