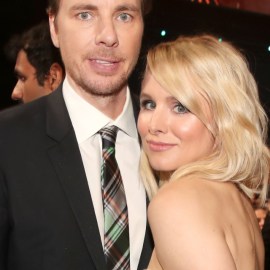 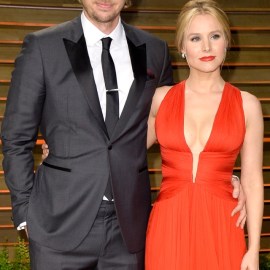 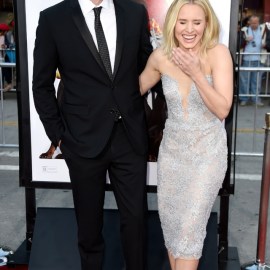 It’s no secret that Dax Shepard has struggled with addiction and is now sober (he just celebrated his 16th “sobriety birthday”!). Even his and Kristen Bell’s young daughters, 5-year-old Delta and 7-year-old Lincoln, are privy to his struggles and know how much sobriety means to their dad. In fact, they’re so on the sober-is-cool train that they were caught drinking one of Dad’s O’Doul’s nonalcoholic beers during their Zoom class.

During an episode on Say Yes! with Carla Hall, Bell said she “walked in” on her daughters drinking O’Doul’s. “My husband brought home a six-pack of O’Doul’s last night. And my daughters often ask for O’Doul’s,” she says.

My daughters love to pick flowers and weeds in our neighborhood, and are constantly putting them in vases all around the house( they are big fans of @kristengvy).  Today we went, in masks, to our local flower shop and the girls made bouquets💜

Before she spoke any further, the mom of two put out a firm disclaimer: “You’re welcome to tell me I’m a terrible parent. I don’t care. I’m a great parent, I think. I’m learning every day,” she says about listeners who will predictably give her flack about their beverage of choice, even though it contains less than 0.5 percent alcohol. “We’re like, ‘I mean, there’s nothing wrong with it. It’s just essentially a bubbly juice.’ Right? There’s nothing in it,” she says later in the podcast about her and Shepard’s decision to let their kids drink it.

Today is my husband's 16th sobriety birthday. My daughter woke him up with this sign, and a sketch of the one and only Ronald Weasley(absolutely random, and also perfect). Happy birthday Daxy. Thank you for dedicating your life to the hard and wonderful work of sobriety, so that we could share it with you. Xo K, L & D

For The Good Place Actor, seeing her kids drinking O’Doul’s is actually a form of connection to and honor for their dad. “The reason for this is because when we first had our child and my husband would put her in the BABYBJÖRN and we’d walk around the neighborhood, he’d pop a nonalcoholic beer in his hand and the baby would paw at it and put the rim in her mouth. It’s a sentimental thing for my girls, right? It makes them feel close to their dad,” she explains.

While the family was drinking O’Doul’s together, Bell and Shepard used this moment as a learning opportunity. “We also talk to them very much about [Dax’s] sobriety and the importance of it and why Daddy can’t drink.” But when they’re not at the dinner table with drinks in hand, they’re in Zoom class with drinks in hand. And yes, Bell knows this probably raises some questions.

“They have 15-minute breaks where they’re allowed to jump around and grab a snack and wiggle it out. And I walk in to check on them at 9:30 and both of them are drinking an O’Doul’s on their Zooms. They’re both just sipping their Doulies. And I’m like, ‘What must these other parents and teachers think of me?’” But then she reminded herself that she simply doesn’t care because she’s not doing anything wrong. “If anything, it opens up the discussion for why Daddy has to drink nonalcoholic beer, because some people lose their privileges with drinking. Drinking’s not always safe.”

Dax and Kristen are just a couple of our favorite celebrity parents who get real with their kids about racism.