Under any circumstances, the loss of a child is so much for a parent to bear. When we heard that Australian influencer Emilee Hembrow had a stillbirth at 30 weeks pregnant last month, we wondered whether this loss was made even harder by the fact that she shared so much of her pregnancy online with her 1.1 million followers. But to hear her tell it, via her Instagram Stories, it’s been quite the opposite.

Hembrow, who is one of four sisters sometimes spoken of as Australia’s Kardashians, had been excitedly sharing bump photos since February, when she announced she was pregnant with her third child. It was clear daughter Aaliyah and son Gabriel were also pretty excited about getting a little brother (her husband stays away from social media).

But on June 21, she posted a heartbreaking message that she had lost her baby, whom she named Jamal Reign Ada.

In God I trust that this is my test. I’m content & grateful for everything, my blessings, my losses, my gains, for the good & the bad. Experiencing a loss like this has truely changed the way I look at life. I’ve learnt many lessons and continue to grow each day that passes. For everyone who has & is going through something similar, you’re not alone. I’ve personally found peace from seeking answers in my faith, this might help for you also. Miscarriage & still birth is very common, just not often spoken about. I couldn’t believe the thousands of messages I’ve received from families going through the same thing. I hope to share with you guys more details of what I’ve been through the past few weeks, when the time is right for me🤍 My husband & I are so thankful for all the love and support we have received from friends, family and all of you. I have learnt from this that if someone you care for goes through hardship, to be there for them physically & emotionally. Even at my worse, having our close friends and family by our side has truely helped us get through this. There is no right or wrong thing you can say, but just being there even without any words has helped tremendously❤️

“There is really no test harder that a person can face, than a loss of their child,” Hembrow wrote. “The bond that is created between the mother and her child, through pregnancy forms the strongest of bonds.”

Rather than grieve in private, Hembrow continued to share what she was going through, even posting a picture of little Jamal’s fresh grave. Earlier this week, she wrote about why she was sharing so much now.

“For everyone who has & is going through something similar, you’re not alone,” she wrote. “I’ve personally found peace from seeking answers in my faith, this might help for you also. Miscarriage & stillbirth is very common, just not often spoken about. I couldn’t believe the thousands of messages I’ve received from families going through the same thing. I hope to share with you guys more details of what I’ve been through the past few weeks, when the time is right for me.”

Despite all the advances in medicine, she’s right that stillbirth, defined as the loss of a fetus after the 20th week of pregnancy, does happen far more often than people talk about. According to the CDC, it affects one in 160 births annually in the U.S.,  and Australia has a similar rate of 6.7 stillbirths per 1,000 births. But perhaps because it hurts too much to think about this possibility, people remain quiet about it.

“Stillbirth & miscarriage was never something that crossed my mind as a possibility to happen to me, I didn’t know how common it is & never heard anyone really speak about their own experience,” Hembrow wrote earlier this week. “Hopefully by me sharing my story I can help someone going through the same thing, we are in this together along with so many others.”

Speaking about this loss, and hearing from others who have experienced the same, has helped her, too, she said.

“Sometimes having social media and everyone watching your life and asking questions can be hard,” she said on her Instagram Stories on Friday. “But to be honest with you guys, reading all your DMs and being able to speak to other women and families who are currently going through the same thing or just went through this has been so amazing, has been such a blessing. I have found so much strength from you guys.”

Her son’s death was such a shock to her, she said, because she had an uneventful pregnancy.

“I had a low-risk, healthy pregnancy,” she said. “I did all the tests. They came back 100 percent perfect. This can just happen. Baby Jamal’s heartbeat just stopped. That’s what God wanted. That’s my test. It is so hard to speak about it. It’s just surreal, but my faith has really helped me through this time.”

Social media is one way of dealing with loss, but it’s not the only method available. If you or someone you know has experienced a miscarriage, stillbirth, or death of an infant, visit Share Pregnancy and Infant Loss Support to find local support groups and other resources to help cope through this difficult time.

These celebrities who had miscarriages share Hembrow’s mission of wanting women to know they’re not alone. 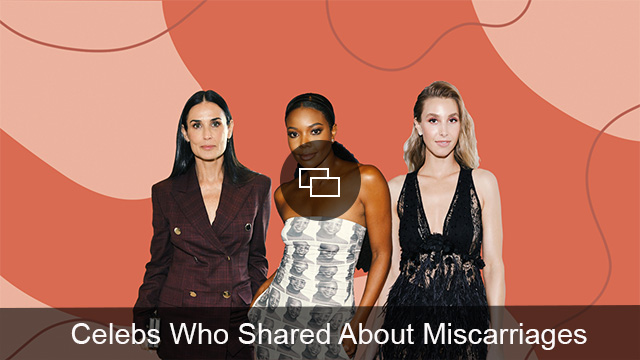