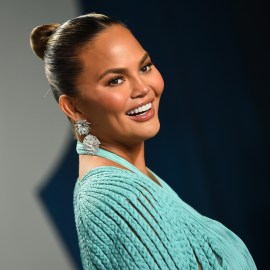 Jamie Otis — like anyone who’s experienced a pregnancy — gained weight throughout the almost-nine months she’s been carrying her baby boy. The difference between The Married at First Sight star and many other pregnant women, though, is that Otis publicly shared (via naked preggo pic, no less!) just how much weight she’s gained in her 39-week pregnancy: 55 pounds. And honestly, more power to her.

Plenty of pregnant people keep their weight gain numbers under wraps due to stigma or fears about gaining “too much” — but weight gain is, obviously, a necessary and healthy part of pregnancy.

“Physiologically, women gain weight with maternal water and body fat and also to accommodate all of the factors and processes of pregnancy,” maternal fetal medicine physician Heather Anaya, DO, told SheKnows.

OB/GYN Lori Hardy echoed this, telling SheKnows that “it is normal and healthy to gain weight during pregnancy not only because of the weight of the growing baby, but also because your body fluid doubles to support the extra blood flow of pregnancy. There is also weight that goes to the breasts, placenta, uterus, increased blood volume, and amniotic fluid.”

I promised God I wouldn’t complain about any pregnancy pains if he’d just let me keep this baby.🙏🏻🤰🏼 Monday I am 39 weeks pregnant!!! I wont complain about the waddle🐧 , the Hemerrhroids😳, the fatigue😴, and back pains🤪 – God’s kept his promise and I’m keeping mine!🙌🏼💗⁣ ⁣ If there’s one thing I wish I could go back and do differently, I’d put more effort into bonding with @hendrix_hehner throughout my whole pregnancy…⁣ ⁣ I’ve held my breath from the moment the fertility specialist said I’m pregnant. I tried my best not to show my fear bc I only wanted to put positive energy out for this sweet baby boy growing in my belly.👶🏼🌈⁣ ⁣ With each pregnancy milestone I felt more and more confident we wouldn’t lose him, but I never felt “safe” to just let all my guards down…which unfortunately prevented me from truly bonding with him.😔 ⁣ ⁣ I’m really hoping to deliver my own son. I want to pull him out and bring him up to my chest and just LOVE on him.🙏🏻 I can’t wait to smell his newborn scent & stare at the wonder of his tiny toes. I am so excited to have a home birth and have the opportunity to have the calmness of my own home so that I can bond and connect on a deeper level with our baby Hayes.🙏🏻🤰🏼👶🏼🌈

“I’ve gained 55 pounds in this pregnancy,” Otis captioned her recent video on Instagram Stories (in it, she’s eating a snack in bed, respect). “I have a week until I’m full term — like, 40 weeks, I mean. So I still have time to go. And I’m like, ‘I don’t know how I got so big?'” the mom of two said while showing her viewers a tub of ice cream. She later revealed that this is her nightly ritual — well, either ice cream or milk and cookies. Both choices sound equally delicious to us.

⁣ BABY HAYES IS DUE ONE WEEK FROM TODAY!!!👏🏻🤰🏼🎉 I’m soaking up every last second of it being just Gracie & me.👧🏼 I’m also *cherishing* every kick, move & squish up against my ribs (oof!🤪) with my strong baby boy inside me.👶🏼🌈⁣ ⁣ I genuinely *LOVE* being pregnant!🙏🏻 I love every single kick & squirm I feel from within. It’s such a magical feeling!✨💫⁣ ⁣ I’m taking in alllll of these moments bc I know our worlds are about to change drastically any day now & our current normal will be swept away & replaced with a whole new tiny human to love on!🥰🤱🏻⁣ ⁣ …This quarantine has been *FOREVER* & I honestly can’t wait til it’s safe to hug family, say hi to strangers & just simply go out again, buuuut I’m also *so thankful* for the demand to stay home with my hubby & daughter right before giving birth.💯⁣ ⁣ Doug and I are usually the “Go, Go, Go” type. This quarantine has forced us to stay put. I’ve spent so much quality time with Gracie. We both needed it.☺️ We’ve bonded and become closer than ever.🙏🏻💗 ….Doug on the other hand – he may wanna kick me outta the house by now!🤷🏼‍♀️ These pregnancy hormones have been raging!🤪⁣ ⁣ He wants Hayes to come on cinco de Mayo—which is also taco Tuesday & obvs its in the midst of the corona pandemic.🤣 Then we’d name Hayes “Hayesrico”😅 He’s crazy – but that’d be quite the story to tell our son!😂

Still, the TV personality has another theory as to why her belly is growing exponentially. “I mean, this must be a really big baby,” she joked.

So how much weight is normal to gain during pregnancy?

“According to the American College of OB/GYN as well as the Institute of Medicine (IOM), pregnancy weight gain should be based on your pre-pregnancy BMI, which is calculated by taking weight in kilograms divided by height in meters squared,” Dr. Hardy explains. “There are tables online to help you calculate this or you can ask your doctor. As with everything in medicine, there will be a range of what is healthy, not just one specific number.” And while 55 pounds is certainly on the high end of things, we’re a) not doctors and b) confident that Otis has a good working relationship with her doctor, aka the person who should actually helping her monitor this stuff. Again: That’s not us, or any other denizens of the internet. So please, think before you troll!

Most importantly, Otis also explained on Instagram that after suffering a miscarriage, her perspective completely changed — on pregnancy, weight gain, the whole lot.

“I promised God I wouldn’t complain about any pregnancy pains if he’d just let me keep this baby,” she captioned her naked pregnancy photos. Otis admitted that she’ll take the back pains, waddle — and yes even hemorrhoids — just to have a healthy and happy baby. And ain’t nobody going to fault her for that.

Here are other celebrity moms who were brutally honest about their miscarriages.