Khloé Kardashian took to Twitter on Saturday to defend herself from criticism. About what, you ask? Oh, you know, just the fact that she didn’t post about her nephews on social media on their birthdays. If you’re making a “huh?” face right now, we’re right there with you.

Kardashian’s nephews, Mason and Reign, each had a birthday this past weekend — and quite a few members of the ultra-famous fam chimed in on social media with images of the kids, coupled with birthday wishes, all in front of millions of online users. Of course, Mason and Reign are little kids who don’t have social media accounts, so they were none the wiser — but that apparently didn’t stop Khloé’s fam on the show from throwing shade over her choice to opt out.

But Khloé clapped back: “I have always found it bizarre that people get upset about birthday shout outs on social media,” The Keeping Up with the Kardashians star tweeted. “My mentality is — Let people do what they want. Personally, I usually don’t post about my nieces and nephews on their birthdays because they’re not on social media. Happy Saturday.”

I have always found it bizarre that people get upset about birthday shout outs on social media. My mentality is- Let people do what they want. Personally, I usually don’t post about my nieces and nephews on their birthdays because they’re not on social media. Happy Saturday

Khloé’s post ignited quite a discussion on Twitter about how ridiculous it is that people get upset over birthday shoutouts on social media, particularly for kids as young as five years old (as Reign is) who are not even online themselves yet. In these cases, who is the birthday shoutout really for, anyway?

Good for you. Last time I checked we’re humans not robots ! As long as you say it in real life who cares. Some people are too sensitive on something that doesn’t involve them haha

These adults swear that these kids are gonna be crying because they didn’t get a shoutout for their birthday 😂😂😂 pic.twitter.com/HEu9ZE9DxZ

It’s like the people who post their Mother’s Day wishes to their mom when their mothers don’t have social media! My mom doesn’t have Facebook so why would I give her a shout out?! I’ll tell her in person!!

I’m with Khloé on this one.

While I totally understand the desire to — and even feel the pressure to — post about my kids online, especially when they have milestone events like birthdays, I usually don’t. After all, my kids do not have social media so they’d never see it. And honestly, the idea of posting a birthday tribute to them when they cannot read it feels an awful lot like trying to prove to total strangers on the internet that I’m being thoughtful. But what am I being thoughtful of? My algorithm? My follower count? 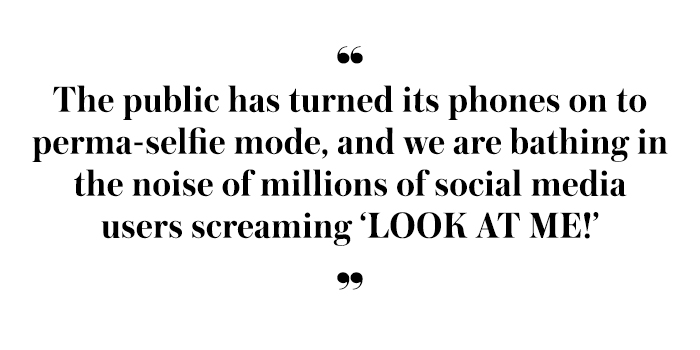 The Kardashians have leveraged their ability and willingness to over-share online into an influencer empire where viewers can watch and comment on every tedious facet of their glamorous lives. The cultural ripple effect has been that social media users copycat some of the elements that the Kardashians have used to become famous for…doing nothing. The public has turned its phones on to perma-selfie mode, and we are bathing in the noise of millions of social media users screaming “LOOK AT ME!”

And that is exactly why I am loving that Khloé Kardashian refused to a post a birthday shoutout to her young nephews online. Because, honestly, what’s the point?

As a parenting writer, this topic of whether to post or not to post when it comes to my kids has come up at regular intervals. My editors constantly ask me for images of my children to accompany stories I’ve written — but I have always resisted. It feels unfair for me to post details about my children for the public to consume when my kids don’t fully understand what putting information out there can really mean.

And while my kids are no Kardashians — with million-dollar plush safety nets protecting them from any potential dangers — I do think it isn’t wise to push kids into the sea of Likes and sharing before they even get a chance to form opinions about the culture of social media (or decide if they want to participate in the first place).

Some may argue that parents like me should chill. Sure, we’re not talking about posting intimate details of our kids’ lives like phone numbers or addresses or even personality traits; these are just birthday shoutouts, for crying out loud, right? But the problem I see — and that I suspect Khloé sees — is that posting a very public birthday message for a child isn’t about the birthday wish. It’s about the popularity and the image of the person posting it. And that is what I think Khloé is absolutely right for refusing to participate in.