Sure, some parents get a little paranoid over every little thing their kids eat — and now, with a new study that reveals how toxic baby foods really are, they have something to show for their mealtime stringencies.

The American Academy of Pediatrics has made it clear from nearly a decade ago that yes, baby foods contain contaminants, but that a diverse diet will prevent any legitimate damage. But this recent study dove deep into how these baby brands are affecting kids’ IQs — birth to 24 months. The verdict? “All four metals are linked to IQ loss from exposures early in life,” HBBF reports. “The scientific evidence spans decades and continues to build: at least 23 studies published in the past seven years confirm these four heavy metals’ impacts to a child’s healthy development,” HBBF reports.

The researchers found that fruit juices, rice-based products, and sweet potatoes are the worst culprits of them all. For example, sweet potatoes, which retain more metal than most fruits, are naturally contaminated with heavy metals — whether found in soil and water, airborne, from fertilizer, and/or from industrial operations. Homemade purees, in this case, won’t prevent your baby from consuming metal. “Even in the trace amounts found in food, these contaminants can alter the developing brain and erode a child’s IQ,” the researchers wrote.

Overall, parents should avoid baby foods with rice, juice, and orange root vegetables until the FDA does more to establish and finalize health-protective standards for heavy metals found in baby food. 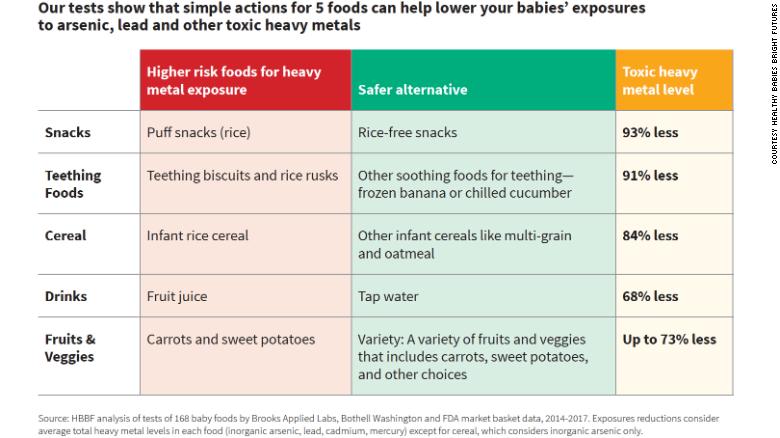 But how scared should parents really be?

According to toddler-nutrition expert and dietitian Kacie Barnes, it’s normal to find traces of heavy metals in ALL foods that are grown, not just orange root vegetables. “Heavy metals are present in our environment. So unless we created all our food in a lab, there’s going to be small traces of heavy metals,” she tells SheKnows, explaining that parents don’t need to avoid avoid small traces of metal entirely. “The concern over heavy metals in baby food is not as serious as the news makes it out to be. Heavy metals like lead and arsenic are found in the soil, and it’s impossible to completely avoid them.”

Want to know how I choose snacks for my kids?⠀ ⠀ We want snacks to provide some nutrition and be more than just “crunchy air” that leaves them hungry and whiny an hour later.⠀ ⠀ And it’s nearly impossible to always serve them something at home for snack time, so you NEED to have some grab and go options that will do the trick.⠀ ⠀ First- I glance at the ingredients to see what’s on there. Is it mostly real food? I like to choose those real food options when I can.⠀ ⠀ Then I look at the nutrition facts. Protein, fiber, and fat will help keep them full. And, many kids don’t get enough fiber in their diet so it’s helpful to incorporate some fiber at snack time.⠀ ⠀ You want to see at least 2 grams of fiber and protein.⠀ ⠀ I do also like to see some fat, since it’s important for brain development, but I wouldn’t worry about finding a specific amount in a snack.⠀ ⠀ Sugar: look for 6g or less of added sugar. Natural sugars from fruit are okay, like you see on this label (it’s a Larabar). Sometimes labels don’t list how many are added which is super annoying!⠀ ⠀ Sodium: look for under 250mg sodium per serving.⠀ ⠀ You do not have to strictly stick to these rules, but they will help guide you in knowing whether something is a more nutritious option or not!⠀ ⠀ ✨ If you want a simple list of my favorite healthy snacks for toddlers that you can find at Target and the grocery store, click on the link in my profile and scroll down to HEALTHY TODDLER STOREBOUGHT SNACK GUIDE to grab a copy!

Still, she explains that we don’t yet know precisely how much metal is unsafe for a baby to consume: “No one is ever going to do an experiment on a baby to find out just how much of a heavy metal their system can handle before experiencing health problems, because it’s cruel!”

Overall, though, Barnes agrees that rice cereal should not be offered to babies since it has a higher concentration of arsenic — and it doesn’t have a ton of nutritional value anyway. “Newer research supports offering babies a variety of foods from the start, like soft veggies and fruits, even meat and beans,” Barnes concludes, urging parents to branch out from traditional “first foods” like rice cereal and apple juice.

Moral of the story: Diversify your baby’s foods and take parenting studies with a grain of salt.