There’s a new uprising in town, and its hashtag is #longhairedboyrevolution. Parents are absolutely furious that Instagram has been flagging and deleting photographs of long-haired, shirtless boys — because its algorithms are mistaking them for girls.

Tori Spooner is a Florida mom whose son, Parker, 4, loves his long hair and “never wears a shirt” because the family practically lives at the beach. She told BuzzFeed News that a shirtless picture of Parker was first flagged on Facebook — which, in case you didn’t know, owns Instagram.

“[Facebook] sent it and said it was sexual and we weren’t allowed to have it. It was pretty much just a warning,” she told the outlet. “Then the second time it happened… [Facebook] banned me for a couple of days.”

Soon after that, her Instagram feed was flagged and eventually, her entire account deleted by the app, although it’s back online now.

Here’s Parker with Spooner’s call to other parents to mobilize against the app and its algorithms that shame topless, long-haired boys:

Help us share this message to get @instagram attention! Who’s with me?! Im tired of having Parkers shirtless pictures get deleted because IG think he’s a girl for having long hair! It’s happened so many times that they will delete all my accounts if it happens again and I’ll lose all my pictures. There is no way to contact them either. This happens to thousands of other little long haired boys too, not just us. There has to be a way to get @instagram attention. JOIN IN AND MAKE A SIGN and tag #longhairedboyrevolution @mosseri

Many parents responded with photos of their own long-haired boys, protesting the profiling:

First it was @facebook and Now @instagram is censoring photos of my long hair SON bc his MALE nipples were showing! So it's ok for accounts to post completely nude adults, some even simulating sex acts as long as the tiniest bit is blurred or covered creatively. But I'm not allowed to share photos of my SON playing outside on a warm day with his shirt off showing his MALE nipples? ARFKM?!? WTAF?! Stop censoring my SON'S photos! Boys are legally allowed to go shirtless! Male nipples are not against your guidelines! Don't be a sexist #instagram BOYS have long hair too! ***For the record, there is no difference between boys and girls nipples and girls should also be able to ROAM THE FOREST TOPLESS as well! #FREETHENIPPLE #malenipplesareallowedoninstagram #censorship #Dragon #kidlife #momlife #gettingannoyed #adventuresofadragon #dragonsandlephants #raiseawildchild #outfamcommunity #OPTOUTSIDE #hikeitbaby #stayoutsidemom #raisethemoutside #naturekids #longhairboysrule #longhairboys #naturallycurly #cgm #staywild #befree #nipplesarenipples #wildandfree #normalizelonghairboys #letkidsbekids #nature #longhairedboyrevolution

A post shared by MotherOfDragonsandElephants (@dragonsandelephants) on May 20, 2019 at 11:39pm PDT

“…So it’s okay for accounts to post completely nude adults, some even simulating sex acts as long as the tiniest bit is blurred or covered creatively. But I’m not allowed to share photos of my SON playing outside on a warm day with his shirt off showing his MALE nipples?….” wrote @MotherOfDragonsandElephants on Instagram.

I will always stand up for you my Son. It’s gotten insane these last couple of months. Friends with 300k + followers getting their accounts deleted due to their little boys with long hair on the beach being mistaken for topless little girls… our accounts get flagged and posts blocked and taken down on the reg due to London swimming or at the beach. He’s a little boy with long hair. @instagram , get your shit together. I have hundreds of friends on here with long hair with thousands of followers. Boys as brand reps including London having their pics deleted and accounts banned due to this nonsense. #longhairedboyrevolution #longlivelonghairedboys

“I will always stand up for you my Son,” wrote Clinton Lane on his Instagram feed. “It’s gotten insane these last couple of months. Friends with 300k+ followers getting their accounts deleted due to their little boys with long hair on the beach being mistaken for topless little girls… @instagram, get your shit together….”

While many parents are furious at the profiling of their children, others are arguing that this is not a gender-based issue — it’s about protecting children from online pedophiles. 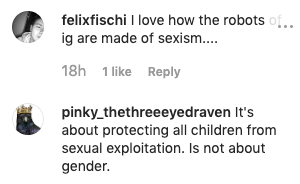 The company responded to Buzzfeed and acknowledged that it had erred in deleting Tori Spooner’s account: “This post was taken down in error and we are sorry for the mistake. We err on the side of protecting children and for safety reasons we remove some images that show nude or partially nude children,” a rep explained. “Even when this content is shared with good intentions, it could be used by others in unanticipated ways.”

Why is Instagram deleting pics of shirtless boys? Parents fighting the #LongHairedBoyRevolution want to know. pic.twitter.com/8usOAlrWFK

We see what everyone’s saying, and we get the points being made. But surely in 2019 we’re past the girls-have-long-hair, boys-have-short-hair age? Plenty of little boys — and grown men — have long hair. Not to mention: Why are online platforms like Facebook and Instagram sexualizing shirtless, boobless little girls? Does it really matter if it’s a girl or a boy if the child is an infant or a toddler at the beach?

There’s got to be a better way to manage online content and keep our kids safe than having bots and algorithms sexualizing and gendering our children before they’re even walking.