“Uh oh,” my six-year-old son says from the backseat — quite possibly a parent’s least favorite utterance when their child is slightly out of sight. “You might want to roll down a window,” he adds, eliciting a disgusted groan from his eight-year-old (going on 16) sister in the seat beside him. But at this point, my kid’s admittedly toxic flatulence is the least of my concerns, because we’re in hour two of a hurricane evacuation road trip. With Dorian barreling toward the southeast coastline, where we reside, we were told to pack up and head for higher ground. However, as any mom who’s been in a similar situation will tell you, that’s easier said than done.

Having to leave your home is a logistical nightmare, but here’s the hard truth: You never know what you’ll come back to. Living on the east coast in the highest-peril flood zone, we’ve become accustomed to mandatory evacuations. We’ve also learned to take them seriously. When Hurricane Matthew came through, we were displaced for weeks, nervously watching every news report of nature’s destruction. Would our home be damaged? Were our neighbors okay? When will it be safe to return? It never gets less nerve-wracking.

But as a mom, you have to weather the storm both figuratively and literally for your kids’ sake. We don’t want to place the burden of worry on our children about whether we’ll have a home to come back to. And so, we try to position each trip as an adventure. We do our best to remain lighthearted so they don’t get wrapped up in the anxiety of the real and present danger at play. 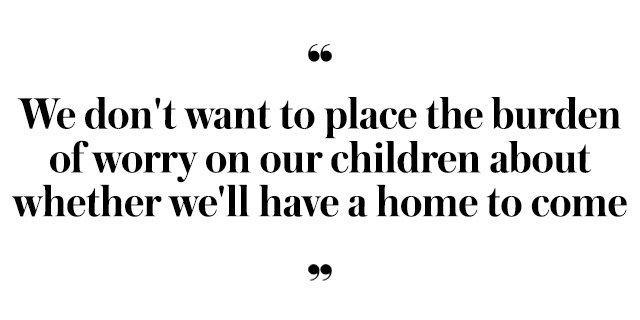 Not knowing when we’ll be able to return, we stuff our SUV to the gills: clothes, toiletries, technological entertainment (a necessity if you want to keep your sanity in the face of the 400th “Are we there yet?”) and, naturally, snacks. In our case, the cargo also includes our two dogs. And by dogs, I mean small horses masquerading as canines. Both German shepherd-husky rescue mixes, Jaws weighs in at a whopping 130 pounds with Mako not far behind at around 85. So, if you thought my son’s backseat fart bombs were gross, you probably don’t want to imagine what sort of noxious fumes were leaching out of the fluffy white butts in the third row.

Although the lanes of the interstate leaving town have been reversed to allow for an easier exodus, this is not a perfect system. You’d think by now we South Carolinians would have figured this out a bit better, but you’d have figured wrong. The interstate lanes that always run in the direction leaving town are bumper-to-bumper. The opposite lanes, which are now running in the same out-of-town direction, are scarcely populated. Ask me which side we ended up on.

As I drop tiny f-bombs in my brain at all of the people who decided to leave town at the exact same moment as us, I occasionally glance longingly at the free-flowing lanes across the median. Admittedly, it also crosses my mind that this feels a lot like a living, breathing illustration of the survival of the fittest. It’s a modern-day problem of Darwinian proportions, and I feel a little embarrassed to be on the losing side of evolution at this telling crux.

That’s an existential crisis for another day, though, because now we’re in hour four of our evacuation and both kids — plus, judging by the whining, the dogs too — have to pee. We pull over at the next exit, where my kids decide they are also starving to death and can’t go another mile without more sustenance. We buy enough beef jerky and granola bars to feed a small army and fold ourselves back into the car.

As we find space in vacant squares of floorboard to stuff our new spoils, I try unsuccessfully to push away the somber thoughts clouding my mind. I can’t help but think about families who lack the means to move out of the path of the storm before it bears down on them. I worry about little bodies without access to clean water.

At this point, we’re probably halfway to our destination and the little bodies in our own backseat pull my focus back to the present. They gave up on the alphabet sign-spotting game when we got stuck on the letter “V.” The tablet batteries have fizzled out. An evil fairy has apparently materialized out of thin air and stuck around just long enough to steal every single crayon from the box, rendering the kids’ new coloring books useless. So, I do what any desperate mother would do at that moment and connect the car radio to our Spotify account. DJ F-Bomb Mom to the rescue.

I’d love to say that the rest of the drive was a breeze. But, in addition to listening to every song in The Toilet Bowl Cleaners’ catalog (seriously, they’re a thing, look it up or, on second thought, don’t), we suffered a few other comically bad setbacks. “Mom, there’s something bubbly and yellow back there!” my son yelled at some point, which led to another pit stop to clean up a foamy pile of dog puke. There was also the moment my son spilled half a jug of ice water in his lap. Or the time my daughter started crying inconsolably because she watched a video in which a woman tricked her dog and “the dog was soooooo sad.”

By the time we arrived in the upstate and out of Hurricane Dorian’s path, I officially felt like a natural disaster, too. But after I put my kids to bed and poured myself a big ol’ drink, I reminded myself that as hilariously terrible as our eight-hour (yes, it took eight hours!) road trip was, it pales in comparison to the very real tragedy the people in the Bahamas and other affected areas are facing right now. It can take months, even years, for a community to recover from catastrophic storm damage. Lives have been lost. Homes have been destroyed. Our eight hours in the car was a drop in the bucket compared to the heartbreaking reality before so many families.

So, when we pile into our clown car of catastrophes for the road trip back home in a week, I’ll keep in perspective how fortunate we are to be safe, dry, alive and together… even when my son turns our SUV into a rolling Dutch Oven of stink.