While the first report card is still a ways away, back-to-school season means back-to-grades. Whether your child’s school offers letter grades, or some version of the “meets satisfaction” scale, grades and academic performance can cause stress for both them and you. But how much do grades matter anyway, especially in the elementary school years?

Or, at least, not in the ways we commonly think they do.

“No one is ever going to ask to look at your fourth-grade report card,” says Meg Flanagan, an education advocate and consultant. And while there are reasons to track grades and use them as a barometer on your child’s progress, Flanagan urges parents to lose the notion that every child should be striving for A’s or Excellents. They are merely just a picture of how your child performed on a topic at a certain day and time, influenced by things like sleep, home life, and activities as well as mastery of the subject. Grades also don’t offer a full picture, and, in aggregate, don’t offer a particularly helpful one.

Starr Sackstein is a teacher and outspoken advocate for ending grades in schools. She has written before about the problem with averages in grading. Two students could arrive at the same grade in different ways: one with natural intelligence and no effort, and the other with monumental effort. Depending on the grading system, averages can also be meaningless. A child who consistently performs at a B level, for example, may look the same as a child who performed at an A level on all tests but failed to complete homework. Both children may require intervention from parents and teachers to help them progress but in very different ways. Grades are also not markers of a child’s overall intelligence — or even their passion for a subject.

There are ways grades do matter, though, in Flanagan’s estimation — and that’s in tracking progress. That means the goal shouldn’t be high grades, just some grade change. In this view, straight A’s shouldn’t even necessarily be the goal, because it could just be an indicator of a lack of challenge in the classroom. If your child is in a public school, a lack of academic challenge could mean you might want to work with the school to come up with a Gifted Education Plan. If you are in a private school, a teacher might still be able to find new or challenging work for your child individually. 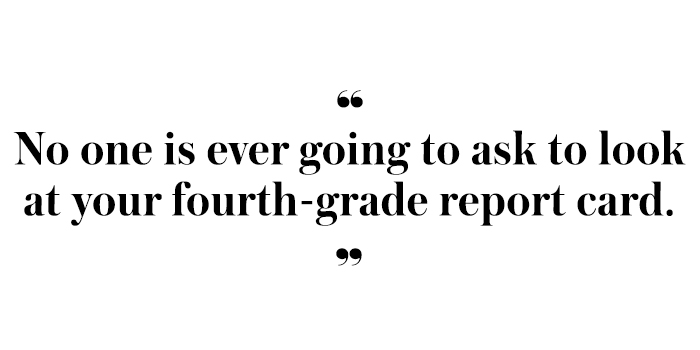 Flanagan also stresses that grades may matter more for students with Individualized Education Plans, or IEPs. Because IEPs require data to prove a plan is working, grades are important. But, again, it’s not about forcing a child to make higher grades. Instead, low or flagging grades may be a sign that an IEP needs adjustment.

That isn’t to say no one should be tracking grades. If your child’s grades fail to show progress or don’t seem to reflect effort you know your child is putting in, steps can be taken. After all, while elementary school grades won’t go on a college application, failure to grasp subjects can have a ripple effect, especially in subjects that build on themselves year after year. Flanagan actually wrote a book on this called Talk To The Teacher. Her recommendation: start with a neutral statement or compliment (and make it sincere). Follow up with a neutral statement, not one that accuses the teacher of failing at their job. (“I’ve noticed Emma is struggling in math,” or “Despite doing well on homework, Jaden isn’t doing well on tests.”) Talk about solutions together and steps that you both can take. At the end of the meeting, restate the plan for both yourself and the teacher.

While Flannagan and Sackstien’s approach to grading sounds ideal, not all teachers will subscribe to that mindset. If your child is picking up grade stress elsewhere, you may need to talk to the teacher to also emphasize that you are not asking for extraordinary academic achievement for your child, merely progress. Teachers also should not be discussing grades publicly or sharing other students’ progress. This isn’t idealism; this is the law.

The Federal Education Rights and Privacy Act, or FERPA, is a far-reaching federal law that covers how and when a student’s grades can be shared. Similar to HIPAA, at its most basic it means only individuals with a vested interest in your child’s education can access their grades. That means teachers should not be posting test results, announcing when someone does well (or poorly) or keeping a tracker visible with each kid’s reading level. If these things are happening at your child’s school, it is worth setting up a meeting with the principal to discuss ways the staff can be reminded about FERPA regulations.

But, in general, if your child is doing OK in school, Flanagan offers this advice: “Don’t stress about grades in elementary school. Don’t stress about homework. As long as they are progressing through expected or individualized standards set for them by the state [or] by their education team, they’re fine.” She adds that, as both a teacher and a mom, she feels a kid’s socio-emotional progress is much more crucial than their grades: “Are they a good person? Are they acting appropriately? Are they making friends? That’s more important than if they’re ‘succeeding’ extraordinarily in school.” In other words, the kinds of skills that can’t so easily be summed up by a test or GPA.

4 hrs ago
by Kyunghee Kim