Many of us parents (blessedly) have an innate sense that sharing certain family videos — say, one of your 2.5-year-old sucking on his father’s meaty toes with obvious relish — might inspire a few internet commenters we’d rather avoid. And so we skip that post. But hey, actor Armie Hammer of Call Me By Your Name fame really went for it, letting his son, Ford, go to town on his big fat piggies the other day while his wife, Elizabeth Chambers, filmed the event.

Well… kids do weird stuff sometimes, right? But all bets were off when Hammer chose to share the clip of his son chomping dad’s toes like corn dogs at the county fair with the entire internet via Instagram. It was definitely Hammer time — with Hammer toes, nonetheless. The clip has since been deleted, but the damage has already been done: Hammer was trending hard on Twitter because of this.

Just say no to finding out why #ArmieHammer
Is trending pic.twitter.com/B7LeKsrxcQ

The clip shows Ford and his dad laughing while Ford sucks on his papa’s toes, and a woman in the background (likely Hammer’s wife and Ford’s mother, Elizabeth Chambers) groans, “This is not normal.”

When Ford stops feasting on his father’s feet, Hammer grins and says, “All right, no more.”

That might have been okay, but the bizarrely social-media tone-deaf Hammer captioned the clip, “This happened for a solid 7 minutes” and hashtagged it “foot fetish on fleek.” Um.

Commenters were quick to respond before the post was deleted. “So gross. Why post it and let it go on for 7 minutes!!” wrote one.

“TOTALLY NOT FUNNY… inappropriate,” wrote another.

Blogger Perez Hilton got into the mix by posting the clip onto his Instagram and polling followers “inappropriate or funny?”

And to everyone’s surprise, that’s where Elizabeth Chambers decided to react to the backlash against the family clip she’d filmed. 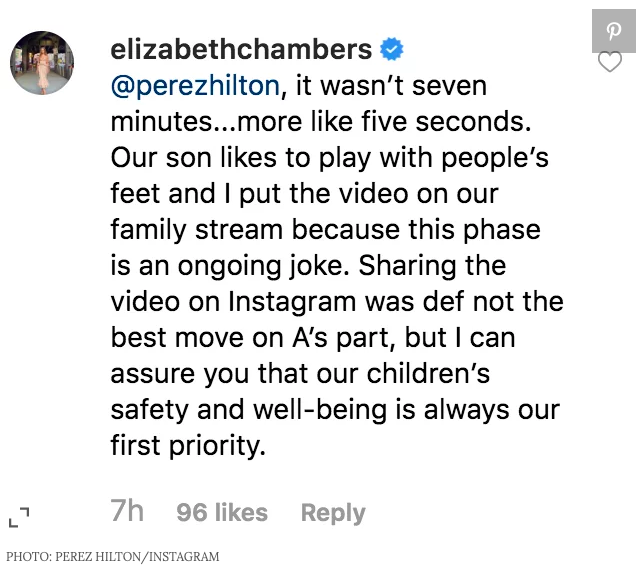 Although Chambers admitted “sharing the video on Instagram was def not the best move on A’s part,” she downplayed the incident as an “ongoing joke” in the family (they also have a daughter), saying “our son likes to play with people’s feet.” She also insisted, “It wasn’t seven minutes… more like five seconds.”

Okay, okay, we got it. And Lord knows, we know toddlers do really, really bizarre things. Though a minority on Twitter, there are quite a few voices speaking up for Hammer, simply urging more judicious filming — and sharing.

To be fair to #armiehammer , my godsons. nieces and nephews- when they were very little- did all sorts of things, like kisses, suckling, caresses and out and out groping. Little children do this. But my god, don't film this and share. #babiesareweird