The conversations about whether or not working mothers can “have it all” has gone back and forth so many times it may as well have looped around. But in the responding to response to the response to the idea of where, how, and if working parents can balance careers and children, the question is perhaps more rarely asked: how many women actually feel like they’re achieving that mythic work-life balance?

According to a study from SeniorLiving.org, one in four women feel like they are equally career- and family-focused. That number is either depressingly low or surprisingly high, depending on your perspective. On the one hand, 25% of working moms is a low number. On the other hand, considering the demands placed on working mothers, it can seem remarkable that even a quarter of them could feel that way. 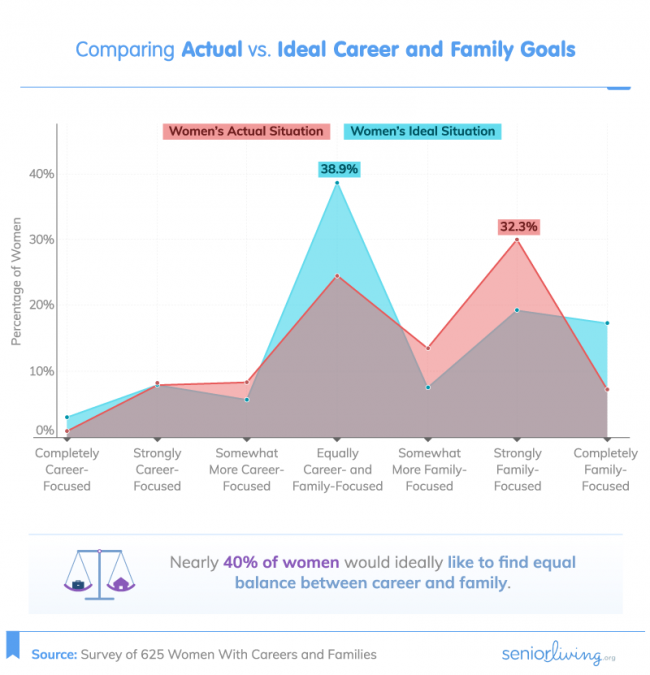 While only 25% of women felt like they were equally career- and family-focused, 52.3% of respondents felt like that balance was possible. That number falls a bit to 48.9% for women in single-income households. But while around half of women believe the balance is possible, that doesn’t mean that all want it. Thirty-eight percent polled said their ideal work-life balance would be equally focused on both career and mothering. Interestingly, nearly a third said they are “strongly family-focused,” whereas closer to a fifth said strong family focus would be their ideal.

How women feel about whether it’s even possible to “have it all” also appears to be generational. Baby boomers are the most likely to think a work-life balance is possible, with Millennials and Gen X-ers being less likely. “While our data can’t speak to a conclusion directly, it’s possible that the days of ‘work-life balance’ may finally be numbered — younger working moms just aren’t buying it anymore,” a spokesperson for SeniorLiving.org told SheKnows. But it could also speak to an end of the idea (maybe! finally!) that “having it all” means having a perfect balance between home life and work life.

“For new working moms, work life is about integrating everything into a life that works for you, holistically as a woman — you, your career, of course, your family,” the spokesperson added. “The results could be indicative of a shift in the societal concept of what is the ideal balance, rather than younger women becoming less optimistic.”

But the study also found that it can take up to six years for a woman to feel like she can achieve work-life balance.

The older ages of the boomer respondents could be at play here as well. What exactly “balance” means is an iffy thing to define, and ever-shifting. Does a balanced life look at how your attentions are spread out over a week, month, year, or more? Perhaps the older boomer respondents have simply had more time to course-correct after years of early motherhood focused more on family — now that their children are older and they, the mothers, can focus more on their work than parenting.

Lest that sound like too rosy a reading, however: Don’t forget that even if women need to or want to take time to focus more on family than career, they may suffer financially for it. Of the women surveyed, 41% felt that their salaries were negatively affected because of responsibilities to their family. In other words, “having it all” can come at a (literal) cost.