Astronauts, like dinosaurs and whales, are one of those things kids love that also loses its luster as we become adults. Because we grown-ups have now known our whole life that giant lizards once roamed the earth, mammals the size of commercial airplanes swim the deep, and that humans can be propelled out of the earth’s atmosphere onto a tiny rock over 200,000 miles from earth, those facts somehow stop amazing us at a certain point. But the truth is, they’re pretty amazing. And in case you need a reminder of just how amazing a feat it was to land on the moon in 1969, let this week’s 50th anniversary of the Apollo 11 mission be a time for you to rediscover that — and share it with your kids. Here are 10 miraculous moon facts all ages will enjoy.

The idea to even try to send someone to the moon in the first place was all part of the Space Race with the Soviets during the Cold War. Note that this was a race the United States also appeared to be losing; Russia was the first to get an artificial satellite, an animal, a human in general, and a woman specifically, into space. But in 1961, JFK announced the goal of landing a man on the moon within the next decade. At that point, the most time any American had spent in space was 15 minutes. By comparison, Apollo 11 would be an eight-day round trip.

Sure, it was a man who first walked on the moon. But women got him there.

If your kids are old enough, this week is the perfect time to rent or stream Hidden Figures. The 2016 movie dramatized the then-little-known story of the role Black women played in calculating the launch paths and trajectories space flights would take (and making sure those paths could get folks safely home, too). While the movie focuses on Katherine Johnson’s pivotal work on John Glenn’s orbit (he was the first American to orbit Earth, obv), Johnson also worked on the Apollo 11 mission. If your kids are too young for the movie, a version of the book for kids is free on Kindle.

Another woman who made the first trip to the moon possible was Margaret Hamilton, who was 32 when she saw the software she wrote make the first moon mission possible. She did all of it with a team at MIT in Boston; Hamilton is also credited with popularizing the term “software engineer.”

The astronauts spent their time in a teensy spacecraft the size of a car.

Most of what we see when a spacecraft is taking off is the rocket, which only serves to provide the immense amount of power it takes to get the craft into space. Most of that is then jettisoned when it’s no longer needed. It only took the three astronauts a few hours to get out of earth’s orbit — and to no longer need the several rockets attached to the main spacecraft, known as Command Module Columbia. It was about the size of a large car inside. The command module was also the only part of the spacecraft to return to earth. The parts of the spaceship, and how they worked, are illustrated in this video from Vox that kids may enjoy.

One of the three moon-landing astronauts didn’t get to walk on the moon. Womp.

Neil Armstrong was the first person in history to set foot on the moon, followed by Buzz Aldrin. But a third man on the mission gets talked about a lot less: Michael Collins. Aldrin and Armstrong reached the moon by leaving the command module and getting into a lunar module, later named Eagle. While they walked on the moon and gathered samples, Collins orbited the moon alone. For 47 minutes of that rotation, he was behind the moon and completely alone, unable to reach Mission Command by radio.

It was not actually “one small step,” like at all.

“One small step for man, one giant leap for mankind,” is one of the most recognizable quotes in the world. But in reality, it was more of a leap for Armstrong, too. As the first person to ever land on the moon, he did so very gently. That meant that the Eagle’s shock absorbers didn’t compress, leaving them over three feet from the surface of the moon.

The astronauts skipped their nap — oh no!

This might be familiar to parents of younger kids. After the Eagle landed, Aldrin and Armstrong requested to skip their scheduled 4-hour nap and start exploring immediately. NASA granted the request. They would later try to sleep after taking turns doing their moonwalks, but neither found it very comfortable. Their spacesuits were designed to keep them comfortable on the surface of the moon but were too cool inside the more controlled environment of the Eagle.

That iconic American flag on the moon…fell down and also disappeared.

The site of an American flag being planted on the moon is another incredibly iconic image from the moon landing. Aldrin says he saw the flag topple over once they took off. Because there is almost no atmosphere on the moon, people have also speculated that the sun’s rays will have long ago disintegrated and bleached whatever was left of it, but no one knows for sure. Interestingly, the flag almost wasn’t placed on the moon because of a treaty that declared it the “common heritage of mankind.”

Moon dust smells — and nobody knows why.

Just about everything the astronauts did on the moon was a first, including becoming the first people to smell moon dust. Once they returned to the lunar capsule, the astronauts (as well as all later astronauts on the moon) described the smell of the fresh dust as reminding them of burnt gunpowder. But the stuff that makes up moon dust and gunpowder are two completely different things, leading to several inconclusive theories about where the smell comes from. Back on earth, the same moon dust has no smell. Creepy.

Despite what the freeze-dried ice cream at science museums will lead you to believe, it’s possible to eat real food in space. It did, however, have to be rehydrated first. Some food they ate included beef with vegetables, pork and potatoes and bacon and apple sauce. You can read more about the history of food in space, with pictures, including some less-than-appetizing meat in tubes from earlier missions, on The Sun.

They didn’t get to go home right after.

After their nearly 500,000-mile round trip, the astronauts didn’t get to go straight home! How unfair. Instead, they were quarantined for 21 days to make sure they didn’t bring any diseases or germs back from the moon. They also filled out a customs form when landing in Hawaii, listing “moon dust and moon rocks” as their cargo. 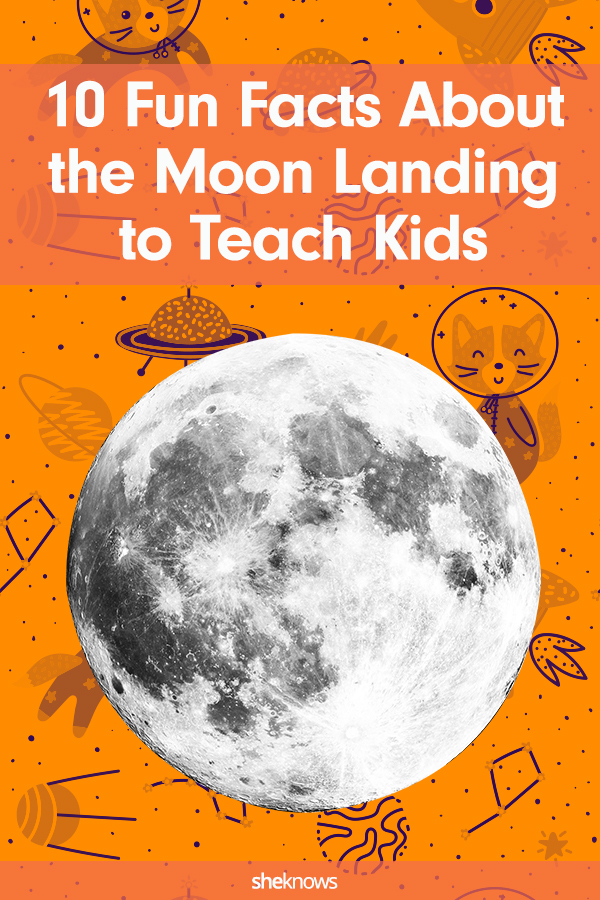