I was faced with a tough choice: bob and weave around her question, or tackle it head-on (ugh, no pun intended). I chose the latter.

“Do you really want to know?” I asked her, my cheeks flashing hot at the mere thought of the conversation I was about to embark upon. I scrambled momentarily, thinking of all the half-truths I could tell her, before taking full advantage of the opportunity before me: “Sex is fun,” I told her. “It feels great, and a sex toy makes it so you don’t even need —”

But Kathryn wasn’t finished with her cross-examination: “So do you, like, go to Toys ‘R’ Us for grown-ups or something?” No, I told her. I shop online.

And that was it: I never got to finish the long sex-positive explanation I had been forming in my head. I never even got to tell the superbly naive young girl before me — who, the last time we talked about sex, had surmised that I’d done the deed exactly three times (hence my three children) — that sex is a normal, natural part of any healthy adult life and/or relationship. Because as soon as she’d gotten a reasonably useful answer about sex-toy shopping, she had retreated to read the latest issue of Nat Geo Traveller. End of story. 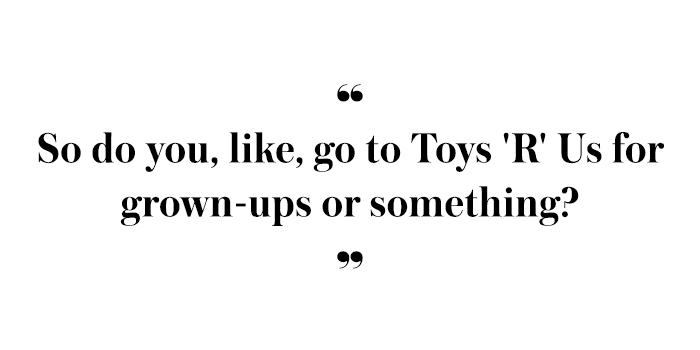 Because she didn’t really want to chat with her mom about the intricacies of self-pleasure and a healthy sex life. She simply wanted info — the same kind of useful info my own mother had declined to arm me with as an adolescent. (I vaguely recall her purchasing me some books — Where Did I Come From? and What’s Happening to Me?, a pair of slender black-and-white volumes to help steer me and my older sister through our awkward questions about conception and puberty, but that was it. Growing up, I navigated the unknowns of my world the old-school way: via trial and error.)

A few months later, when my 12-year-old stumbled upon the same discovery as her sister had, I was ready. Alice was less direct, but she cut straight to the chase nonetheless: “I found a model in your bathroom,” she said. “A penis model. What’s it for?”

After working to stifle my laughter, never ever having heard the term “model” used in this context, I quickly composed myself. Sure, my heart skipped a beat (Really? I left it out again?? I thought), my cheeks did not give me away this time. Instead, my response was free from any hint of culpability and instead put my daughter on the proverbial stand: “What were you doing in my bathroom without permission?” I asked her, pointing to the fact that she has her own. My daughter shrugged. “I’m not sure,” she mumbled, “but I want to know.”

So I proceeded to address her questions in precisely the same manner as I had with her sister — and the results were equally successful. Before long, all kinds of questions were tumbling out of her almost faster than I could answer. 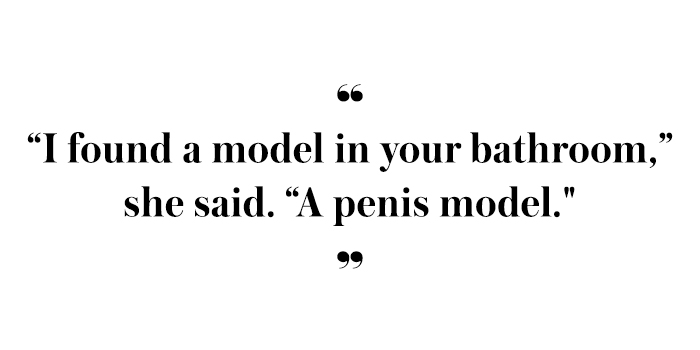 “Where do kids buy Juul pods? How old were you when you first drank alcohol? Have you ever tried marijuana? Should I be worried about my friend if she tried to cut herself? Do you think I’m underweight? You were in high school when you got your first period, right?” And on the heels of our wholly unexpected rapid-fire discussion, my daughter said something that shocked me: “I’m sorry,” she said quietly. “For snooping in your stuff. I’m going to try not to do that anymore.”

I used to think being a single mom complicated things when it came to talking openly with my daughters about sex. Somehow, I had created a story in which my kids’ gross health questions/queries/observations/discoveries would be so much easier for me to stomach if I were married — to their dad. Or at least this was the script the conventional world had me believing.

But when my daughters found the dildo belonging to my single-mom self, the conversations were surprisingly simple. In fact, their discoveries catapulted all three of us into an ever-important conversation about boundaries — a conversation that would never have happened when their dad and I were married. After all, my married life had been mostly chaos — complete with lots of yelling and screaming. My married self was a stay-at-home mom to three little girls under the age of 5; back then, no one was doing much of anything that needed to be obscured from view, and the concept of knocking on a closed door hardly existed. Our kids barged into our room — and likely rummaged through all our stuff — at all hours of the day. And I was always too exhausted to stop them.

Here’s the thing: Owning up to our choices (and purchases!) as parents is far easier than one might think. In fact, the conversations happening in my house have become increasingly transparent since I’ve been “going it alone” as a single parent, and the payoff is manifold: In stepping outside of my comfort zone, I am simultaneously educating my impressionable daughters while modeling for them things no adult ever even spoke to me about — and word on the street is that my kids are a big fan of my approach.

“I like the new, honest Mommy,” my 12-year-old recently told me, as she climbed onto my lap for bedtime stories.

“Awwww, thanks sweetie,” I said as I pulled her in for a snuggle on the couch. “And just in case you’re wondering,” I told her. “You still need to ask for permission before using my bathroom.”