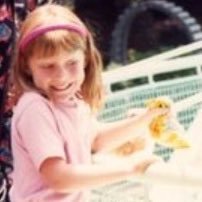 I had been a mom for a mere 11 weeks when my dad died of early Alzheimer’s in January 2018. He held my daughter for the first time on Christmas Eve, caught the flu the day after Christmas, and just like that, he was gone. I’d become a parent and lost my parent in what felt like the same moment.

Life, I thought, was supposed to follow a certain sequence. Get a job, get married, buy a house, have babies… I was not supposed to become a parent and bury a parent simultaneously. But there I was last year, doing just that: Grieve, nurse, pump, repeat. (Notice that “sleep” didn’t make it onto that list.)

Terrible newborn sleep coupled with devastating grief brought out a shade of rage I recognized — because I’d seen my dad wear it too many times during my childhood. The man once famously destroyed our riding lawn mower with a sledgehammer for the entire neighborhood to see. He spat out the most fantastic swears while fixing things in the garage and railed against his punching bag when he got frustrated, which was often. My mom constantly begged him, to no avail, to stop sweating the small stuff.

In the days after my father’s death, nothing made me happier than being out and about at playgroups, baby storytime sing-alongs and new-mom meet-ups. I loved talking sleep regression, teething and clogged milk ducts; in those conversations, I could pretend I was just another normal new mom like the rest of them. But when I got home, I knew I wasn’t normal; my beautiful, joyous achievement of new parenthood would always have an asterisk next to it in my memory. I resented that asterisk.

My daughter refused to sleep for longer than 40 minutes at a time as a newborn. No amount of rocking, shushing, swinging or bouncing could get this beautiful girl to rest in her crib for more than exactly 40 minutes. She had to either be in my arms or on a car ride to the state line and back to take a decent nap. When she was four months old, my husband and I started sleep-training her. Mercifully, she finally learned to sleep at night — but still, no matter what we did, we could not get this girl to nap during the day for more than 40 minutes on the dot.

Every failed nap only added more fuel to my private fire. During the few hours of sleep my daughter granted me at night, I would dream that my dad hadn’t died. In my dreams, my dad sat me down and explained that he never had dementia, and that he was alive as ever. We would embrace and rejoice and toast with a glass of his trademark single-malt scotch.

My weight-lifting, Paleo-diet-adhering dad was the healthiest person I’d ever known. How he came to develop dementia and died of the flu will remain the biggest mystery of my lifetime. I still struggle with the injustice of it all — but I especially couldn’t deal with it right after he passed.

Waking up from those dreams to my screaming daughter would start each of my days on a dark note — until, one day, I erupted.

That day, when my daughter’s cry came over the monitor 40 minutes after I’d put her down, I threw all of my hairbrushes against the wall — three of them, one by one. I watched them snap in half with satisfying cracks. I shouted every horrible swear word my fuzzy brain could think of.

“For the love of God,” I screamed, “Why won’t this child sleep for more than 40 fucking minutes? Why, why God, why did my dad have to die??”

Instantly I felt transported back to that day in the ‘80s when my dad had massacred the lawn mower. Suddenly, I realized why my dad had punched his punching bag and yelled at the top of his lungs as often as he did: because being a father meant he was actually patient much more than he was angry — more than I could ever understand until I became a parent myself.

I have a lot of memories of Angry Dad, for sure. But they are by far outweighed by my memories of Loving, Caring Dad. He would hug me just for entering the room, and he hugged as hard as he could. He taught me how to get back up when I fell down skiing, and how to lift weights like him so I could be strong enough to make the cheerleading squad. He showed me how to throw a baseball, how to drive…and how to take the steering wheel of my own life.

All of those ventures — especially the driving, unfortunately — required my dad to summon every ounce of patience he possessed. But now that I have a daughter of my own, I realize there were so many other non-events that occurred on a daily basis, during which my brother and I probably (definitely) frustrated the ever-loving daylights out of our dad. And at the time, we had absolutely no idea.

So many parents, even the ones who are easy to anger, have a well of patience within them reserved especially for their children. Somehow, despite the complete and utter mental and physical exhaustion, my dad’s love for me let him tap into that well. And if he could do that, then it was time for me to tap into it, too.

More than anything, I wish I could share a drink with my dad on the back porch (Glenlivet on two ice cubes) and talk to him about my newfound respect for how he parented. I’ll spend the rest of my life accepting the fact that I’ll never get to do that. But in those moments when my now-toddler daughter is being both precious and beyond annoying all at once, I like to think my dad is watching over my shoulder with a wry smile. Now you know, he says to me, why every good parent needs a sledgehammer and a punching bag.