The Apple, we think, has not fallen far from the tree — and we are loving it. Gwyneth Paltrow is in big trouble with her teenage daughter, Apple, 14, for posting an Apple-Gwyneth chairlift pic without her daughter’s consent. (This is the kind of thing that happens on a daily basis to this here writer, so I was kind of tickled to see that the Goop founder is not above the social-media teen smackdown.)

But still, Apple was not pleased.

The response from Apple, in the comment thread (Paltrow has raised an excellent communicator, it is obvious): 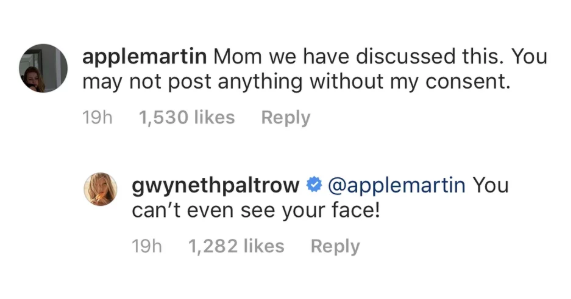 We think this is quite the relatable exchange. We have had our Paltrow jade vagina egg doubts, we admit it. But we think we can let that go now, knowing that she too suffers the quick and merciless wrath of her teen when it comes to social media posts.

Most felt Paltrow’s pain but laughed it off: “My daughter responded the same when I posted her photo on media,” wrote one commenter.

But another said, “Sounds like junior needs to be put in her place.#parentsDontNeedPermission.” Damn!

And of course we had to have a few shamers, like this one, noting Gwynnie’s bare head: “Where is your helmet Gwyneth? Lead by example and remember sonny bono! Everyone must wear a helmet while skiing or snowboarding!”

Anyway, we have to wonder: How does Apple feel about this 2016 video of her singing a cover of Ariana Grande’s “Just a Little Bit of Your Heart” with her dad, Coldplay frontman Chris Martin? Shh. Maybe don’t tell her.

The teen years are tough ones to navigate — for teens and their parents, not to mention ones that are in the public eye or consciously uncoupling. We personally commend Apple for her crystal-clear understanding of consent — and her parents, who have obviously taught her well, even if they can’t resist the occasional selfie with the apple of their eye.

14 hrs ago
by Ambrosia Brody