We are delighted to report that the one and only Jessica Jones — er, I mean the one and only Krysten Ritter — is pregnant. Because what’s the logical next step after wackily palling around with Rory Gilmore throughout our childhoods followed by kicking absolute ass fighting terrifying evils as Netflix’s (and Marvel’s) anti-heroine detective Jessica Jones? Becoming a parent, of course. Because there is nothing wackier nor more terrifying, in this writer’s humble opinion.

And to her utmost credit, Ritter picked the most primo moment to debut her pregnancy: the 2019 Oscars red carpet, natch. Because why drop a regular-old Facebook pregnancy announcement when you could debut your belly to millions of TV viewers and basically every celebrity ever, all while dolled up in gorgeous maroon lace plus diamond collar/shoulder-things plus those twinkly meteors masquerading as earrings? Behold, folks. 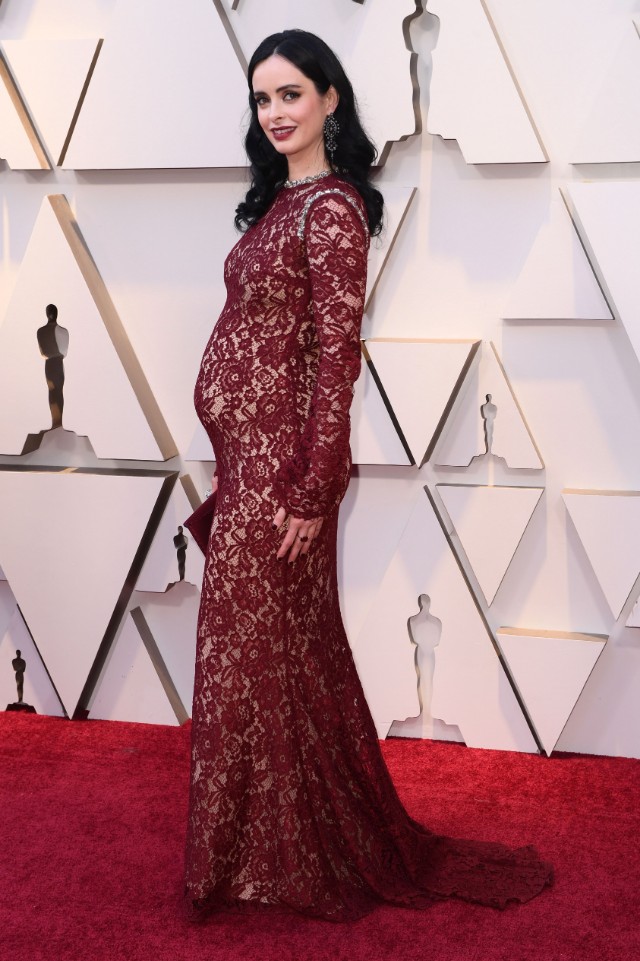 Ritter is gearing up to welcome her first child with her boyfriend, The War on Drugs’ frontman Adam Granduciel, who was also her Oscars date. (As he well should be; every pregnant partygoer needs a trusted human who can hold/sip the pregnant person’s tiny glass of Champagne every time someone with Judgy Eyes starts walking past looking like they’re about to diatribe said pregnant person for consuming an iota of alcohol.) Ritter — who is also an Oscars presenter this year — posted a cute selfie of the two of them at the show, aptly and succinctly captioned, “Oscars!!!”

And while Oscar night in general is a pretty fantastic moment to announce your impending parenthood (honestly, why do more celebrities not do this?) this seems like perfect timing for Ritter in particular, since we just learned a week ago that Netflix is planning to cancel Jessica Jones after three superb seasons.

“In reviewing our Marvel programming, we have decided that the upcoming third season will also be the final season for Marvel’s Jessica Jones,” Netflix said in a statement (the “also” referring to already-canceled shows such as Daredevil and The Punisher). “We are grateful to showrunner Melissa Rosenberg, star Krysten Ritter and the entire cast and crew, for three incredible seasons of this groundbreaking series, which was recognized by the Peabody Awards among many others.” Damn straight it was; that show went where no show — bizzaro badass Hell Kitchen-dwelling female hero or otherwise — has gone before.

But hey, one door closes and another opens. Knowing Ritter, she’ll be on to an even more remarkable TV or film project in no time. Whether that will involve breastfeeding while busting down brick walls… we’ll just have to find out.