There are helicopter parents, and then there are steamroller parents — especially when it comes to kids sports. We’re not sure how we feel about this soccer dad from Aberystwyth, in western Wales. He was so into his 6-year-old’s game he actually shoved his son — making his first appearance ever as goalie, mind you — in front of the ball to make a save. We’ve got the proof right here:

It’s either funny or horrible. We’re not quite sure which. We’re leaning toward horrible, as the dad’s behavior after the shove and his explanation for the incident are frankly pretty sketchy.

Here’s how it all went down. The Bow Street Magpies under-8s team was rocking a 2 – 0 score against the Ysgol Llanilar FC under-8s when the Llanilar striker moved in for the kill.

In video of the incident, the Bow Street Magpies’ goalie, Osian, does seem a little distracted — probably because his pushy-ass father, Phil Hatfield, is standing right by the damn goal post yammering at him. Hatfield can then be seen in the video pushing his son (backward!) smack into the path of an oncoming ball to save a goal. The ball rebounds to the Llanilar striker, who then scores on the Magpies.

Hatfield, a clerk at a plumbing store in Aberystwyth — not a former goalie for Swansea or Cardiff, to be clear — is then seen throwing up his arms and walking away in total disgust. Classy! 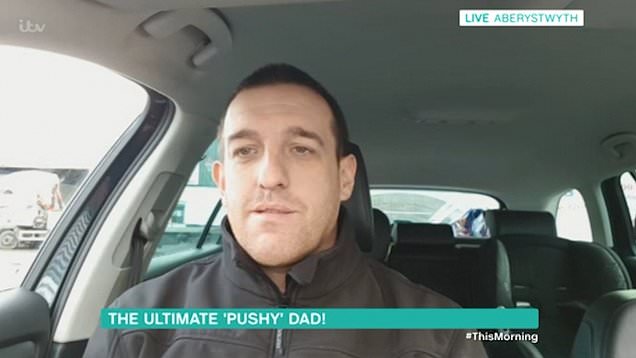 Maybe we would have liked Hatfield better if he hadn’t stomped off like a jerk and proceeded to throw his son under the bus after the incident went viral. The Daily Mail reported that Hatfield denied forcefully pushing his son to block a shot — and insisted that his son had only “tripped over his [own] feet.” WTF, daddy-o? Not cool. Not cool.

Hatfield also told the Daily Mail it was just a “nudge” because he’d noticed Osian losing focus during the game.

“It wasn’t a shove as such… ” Hatfield said. “I was telling him to stand in the middle of the goal but he couldn’t hear me and walked towards me as their player advanced. I was shouting by now that he needed to move towards the ball quickly to make the goal seem smaller to the opponent, but it was too late so I gave him a little nudge to persuade him to move towards the player.”

More: Watch This Dad Comforting His Daughter as They Escape California Wildfire

The footage has been viewed by — get this — more than 25 million people since it was posted in early November. And in Wales, people take their soccer seriously. Now, there are allegations against Hatfield for unfairly intervening in the match.

A Football Association of Wales spokesperson told the Daily Mail: “While we appreciate that this video has gone viral and that many find it humorous, the FAW has a code of conduct for parents, guardians and spectators… We’re duty bound to request observations from the club in relation to this matter.”

Surprisingly, Hatfield’s got plenty of fans on Twitter, some calling him dad of the year (and not sarcastically either). Many Twitter users said they would have done the same thing, which leaves us worried for the mental health of young soccer players around the globe.

Absolute dad of the year.

Let’s just say we’d love to know how Hatfield would feel if someone knocked him flat on his ass to save a shot at his local league game… and the incident went viral.