Before they’re even a year old, babies become an integral part of the circle of life. See, in every ecosystem, there are creatures that live solely off the detritus of other organisms. Algae eaters in fish tanks, hyenas in the Serengetti and carrion-circling buzzards in the desert are prime examples of nature’s scavengers. And in a ranch-style house in Los Angeles, there’s my ten-month-old son Jonah. 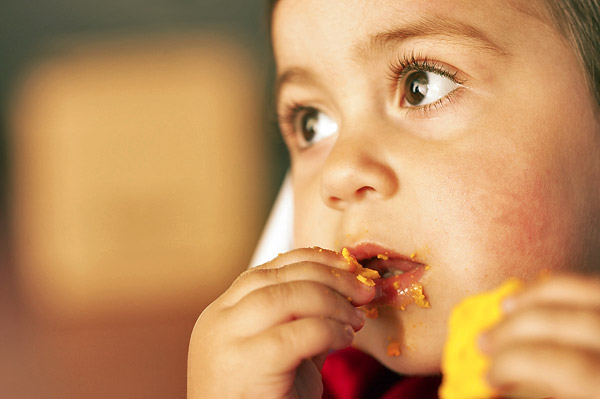 According to anthropologists, homo sapiens is supposed to be at the top of the food chain. If that’s the case, we certainly don’t start out that way. After conducting an informal field study on my own offspring, I have concluded that babies are the ultimate bottom feeders.

Ever since Jonah figured out how to do the traditional hands and knees crawl, he officially joined the ranks of the other quadrupeds in my household — my three orange cats. Prior to this, he was creeping on his stomach like a wounded soldier — a maneuver I called the “G.I. Jonah.” Since he could only go backwards, he actually resembled a wounded, very disoriented soldier with severe head trauma.

Now that he’s shifted into first gear, it didn’t take him long to become the alpha quadruped of the house. Although, the cats are light years ahead of him at fine motor skills such as opening doors with their paws and drinking out of the toilet; at 20 pounds and some change, he outweighs even my fattest, most indolent feline.

>> Prepare your pet for the new baby

He’s nowhere near as fast or agile, but his opposable thumbs are an enormous evolutionary advantage that he uses to pull tufts of fur, tails, whiskers and ears in order to bully the competition away from any stray piece of food or debris that falls to the ground. A pecking order was quickly established after a few ugly skirmishes, and now the cats just hang back in submission.

The cats are in on it

I was starting to feel self-congratulatory about witnessing natural selection at its finest when I had a startling epiphany one day. After fishing an AA battery out of Jonah’s mouth, I realized that the reason Jonah was going unchallenged wasn’t because of his dominance or even superior intelligence. It’s simply because he is nowhere near as discerning about what goes into his mouth as my cats.

In fact, judging by the collective expressions of sheer disgust and morbid curiosity on their faces, I’m convinced they aren’t hanging back in submission. They are simply unable to look away. They probably have a betting pool on what Jonah will try to eat next: “Look there he goes — yes, yes, he’s eating it! Oh wait, no, he’s putting it down — no, no he’s picking it up! Oh God, it’s in! He likes it!” In short, I think they pity him.

Before I disregard their reaction as textbook feline arrogance, I can’t help admit that when I’m not busy chasing after him and intervening, I’m standing alongside them, transfixed with awe, as he sucks up hairballs, dead bugs and carpet fuzz off the floor like a human Hoover vacuum cleaner.

I can’t understand how this same child could possibly have any food preferences. He’ll make the most agonized expressions after a mouthful of something innocuous like peach yogurt, yet he will suck on the sole of a stinky old sneaker with relish.

I think there needs to be an addendum to the gravitational law of “what goes up, must come down.” According to the Toddler Laws, there is a hidden clause asserting the right of first refusal when food is offered in high chair, but once said food hits the ground, it becomes magically delicious.

>> Scary sources of germs in your kitchen

For example, my son will often refuse to eat something in his high chair and throw it to the ground in outraged protest. Yet once it hits the ground, he’ll gaze down at it longingly until he’s set down on the floor and then he’ll inhale it enthusiastically. Obviously, a little bit of dirt gives all food a special zing and a certain je ne sais quoi.

I’m not a germophobe, but some of the things Jonah inserts into that oral cavity of his are a crime against nature. I yearn for a super-sized version of hamster exercise wheels you can install into a playpen. Or better yet, a toddler-sized, plastic run-about ball. What I wouldn’t give to have him crawling around in a sanitary, hermetically-sealed plastic bubble until he graduates from college. I would just fill that thing up with Cheerios, give it a good push and go take a nap.

I can dream all I want, but no plastic bubble will ever keep Jonah from growing up, and already I see that his quadruped days are numbered. He learned to stand at the same time he learned to crawl, and one day, when I’m least expecting it, he’ll take his first tentative steps into the world of bipeds. Ironically, this ascension into toddlerhood won’t be followed with a corresponding ascension up the food chain. If anything, he’ll gain even more access to objects one should never insert into his (or her) mouth.

>> Cleanliness is next to impossible

I know homo sapiens are omnivorous, but babies take this definition a little too literally. Come to think of it, maybe our humble beginning as a bottom feeder is precisely the reason the current evolution of humans is at the very top of the food chain. The overwhelming success of our species is due to our propensity to eat just about anything — a universal trait demonstrated by babies and toddlers. I doubt my psuedo-scientific theories will be published in Scientific American anytime soon, but to a mind ravaged by pregnancy and motherhood, it actually seems plausible.