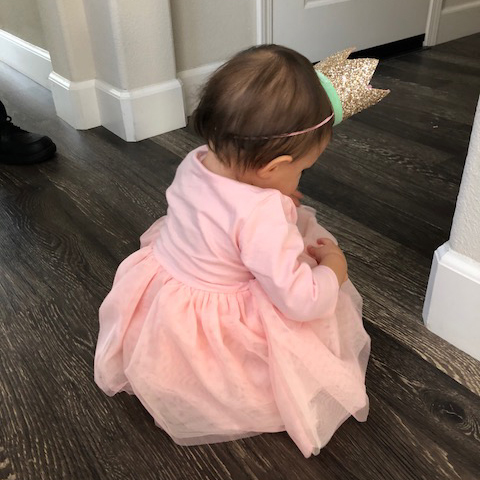 The nightmares started immediately: I dream I’m sleeping soundly and awake to a pounding on the door so loud it rattles the walls and renders the white-noise machine useless. It’s the Administration for Children’s Services, and they’re here to take my baby.

One caseworker is carrying an oversize black duffel bag and starts filling it with toys and clothes and diapers while the other picks up the baby and walks out the door. They say nothing to me: They simply arrive, depart and break my world. I chase them down the street, screaming after them that they forgot Bear-Bear, the brilliantly named bigger-than-the-baby stuffed animal. They drive off and leave me standing in the street, barefoot in the snow.

I wake up from this imagined hell to the baby babbling in her crib, the white-noise machine drowning out the sounds of Manhattan and blood pulsating in my ears.

My baby is still here. But someday, she might not be, because she’s not actually “my” baby. She’s a foster child.

More: Not Your Mom’s Adoption: What the Process Looks Like in 2018

Buttons — a nickname cleverly chosen because of her little button nose and propensity to tug on my shirt buttons (sometimes tugging them entirely off) — arrived at my apartment after three hours’ notice from ACS. I became an insta-mom, which is not unlike any other mom except that instead of a squishy infant, I suddenly had an 11-month-old baby who crawled across my floor and kept trying to gnaw on my iPhone.

The love I felt for Buttons was instant and fierce, which is to say: I became her mother.

Coming from a family with two internationally adopted cousins, fostering and adoption were always my plan. My reasoning was simple: There were so many horrific foster homes out there. I wanted to be a good one. And since I was fast approaching 35 with a career in technology management and a spectacularly supportive arsenal of friends and family, I decided it was time. I completed the requirements to become a foster parent: training, a home study, background checks, fingerprints and a volume of paperwork equivalent to that required to rent a luxury apartment in Manhattan.

I knew that my love for children wasn’t contingent on biology; I grew attached to cute babies on the subway (puppies too). I could love any child. And yet I naively, stupidly, thought I could just foster. That I would be able to eventually give back a child I loved — because that would be my role as a foster parent. My friends and family all laugh about that now. I laugh the hardest. The idea of giving back Buttons is inconceivable to everyone in our lives, especially me.

Two months after Buttons arrived on my doorstep, I met Chloe, Buttons’ biological mother. Prior to being placed with me, Buttons was in the custody of Chloe, who was herself in foster care. After Buttons was removed from her care, Chloe vanished for nine weeks, whereabouts unknown. She missed Buttons’ first birthday, her first steps, her first words.

When I received the call that Chloe had surfaced and wanted to see Buttons, the nightmares became more vivid, more sweat-inducing; they took longer to recover from. But despite the nightmares, nothing could have prepared me for our first visit.

More: How to Raise a Creative Child

Chloe was young, 17 at the time, and beautiful. Her eyes were bright, and her smile was wide yet shy. She approached Buttons in the foster care agency visitation room with the energy and familiarity of a mother greeting her child. Buttons recoiled and ran to me. I was unsure whether that was because she didn’t remember Chloe or because she did.

After several more unsuccessful attempts to get Buttons’ attention and affection, Chloe sank into the vinyl couch and sobbed. I offered her water, tissues and then privacy.

The visits thereafter improved, but only marginally. They were still supervised, still in a small room and still consisted of Buttons fleeing from Chloe and finding comfort in my or her babysitter’s arms.

Over time, I learned more about Chloe: her family, her history, her goals. During one visit, during which I sat in the room with Chloe and Buttons, Chloe spoke of her plan to get a job in fashion and get Buttons back. She wanted to provide a good life for Buttons and give her everything she had never had while growing up herself. She spoke with hopeful determination akin to someone making New Year’s resolutions on Dec. 31, which is to say without acknowledging the true depth of the situation — the fact that Chloe has an abuse charge on her record and that her child is in foster care. Chloe getting Buttons back would involve far more than a stable job in fashion and the funds to buy Baby Gap jeans.

I want Chloe to succeed in life. I want her to be a productive member of society, to have a job that supports her, to break the generational dependency on social and government services, to get her mental health managed with the proper combination of therapy and medication. I want her to experience sobriety, healthy relationships and days that don’t involve blinding rage. I want her to be happy and at peace.

I wish her all the good she hasn’t yet experienced — but only after Buttons is permanently mine. And I hate myself for that.

Children aren’t placed into foster care for being fed fast food instead of organic cuisine. ACS doesn’t pluck children from their homes because they skinned their knee when the parent wasn’t paying attention. They’re placed into care for neglect and abuse, a range of stories that contain only sadness and horror — stories that make you cringe and ones that make your insides ice cold.

Everything about foster care is sad, maddening and bewildering — except for the children. Except for Buttons.

More: I Don’t Regret Giving My Son Up for Adoption

Buttons offers face-engulfing smiles and squeals of delight when we play. In the morning, she stands up in her crib and shouts, “Hellooooooo!” at me until I pick her up. She then snuggles into my neck for a moment before wiggling to get down and play. When she cries, she turns to me for comfort. She calls me “Mama!” with the exclamation mark — always loud, always excited, always making a statement. How could I let her go?

I can’t, and I won’t — not emotionally, anyway.

Buttons’ current foster care goal is reunification. I don’t know if I will have to give her up or if I will someday be her forever family. I won’t know until I either adopt her or she returns to Chloe. If the latter happens, I don’t know how I will recover — or if I ever will.

I don’t know what the scene would look like if Buttons is reunited with her birth mother. But I imagine I won’t actually end up standing barefoot in the snow — and Buttons won’t actually be yanked from our home in the middle of the night. If it happens, it will likely be a “normal” visit at the agency with a simple hug and without Buttons understanding the permanency of the goodbye. But if it does happen, I will ensure she’s holding Bear-Bear.