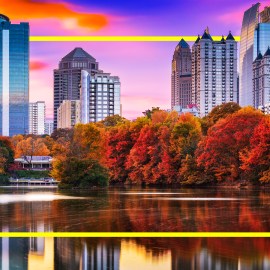 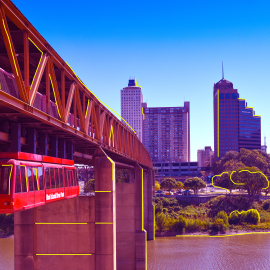 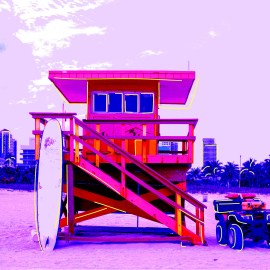 When I was a kid, Christmas presents meant wrapped-up toys under the tree that broke three days later, and stockings stuffed with chapsticks and chocolates. I absolutely loved Christmas morning: sneaking downstairs early to huddle with my siblings on the couch and scope out whether Santa had eaten the cookies we’d left him. As for the gifts themselves, they were…nice? Honestly, I can’t remember. All I remember is the magic, and I’m hopeful that’s what my son will remember about the holidays too. This goal should be easy since I’ve never bought him a Christmas present — not in the traditional sense of the phrase.

Related story Got a Smartwatch for Christmas? These Stylish & Officially Licensed Pop Culture-Inspired Bands Are on Sale for $10

I’ve never bought him a birthday “present” per se either; they’re basically the same day anyway. Silas was born at 4 a.m. on Dec. 26. My son turns five this week, and it will be the fourth Christmas-birthday for which we’ve bought and decorated a tree, cooked a special meal, gone on a trip, and opened a few presents that came in the mail from friends or family. I mean, my son is a child of divorce who has four sets of grandparents — why should I, as his mother, add another new toy to the mix when what my son really wants is for me to spend three hours “baking” Play-Dough cookies with him? When what makes his eyes light up more than opening any package is me agreeing to pretend to be the MommyMonster and chase him in circles through our house while he laughs maniacally?

I’ll admit it: Stuff — and the excessive waste that owning excessive stuff causes — gives me anxiety. I wouldn’t call myself minimalist per se (I mean, I own a four-bedroom house) but I definitely make a point of prioritizing quality over quantity. And that tendency did not change when my son was born. If anything, it went into overdrive.

My pregnancy was absolutely awful (two words: hyperemesis gravidarum), so I was too busy barfing and whining to stockpile cute onesies or hit the bookstore to carefully curate a library for my unborn child. I didn’t have a baby shower. Of course, I recognized that I’d probably have to buy a few brand-new newborn “necessities” for the baby to exist, right? Nope. Stroller, car seat, crib, rocking chair, carrier, every size of clothes from newborn to (so far) 5T — we’ve scrounged them all up secondhand for free.

I didn’t do anything the Christmas my son was born — anything except have contractions, drink wine and watch Transparent, that is — and the following December, we up and went to Mexico and ignored all holidays entirely. This, by the way, was definitely a “gift” in my mind but somehow didn’t make the cut for the many folks who continuously ask, appalled, “But what did you buy him for Christmas? Like, what are you giving him?!”

The same happened in the years that followed when I “gifted” my son with trips to Morocco, Iceland, Cuba, or a cross-country U.S. road trip with a rented trailer that came with a potbellied pig named Maxine. Or last year when my son got to spend his birthday ecstatically “driving” the trucks at the fire department where my brother works. My son and I have hiked mountains together, we’ve salsa-danced together in Old Havana, we’ve waded off the west coast of Africa. He loves these experiences, and raves about them to his classmates.

But as much as time and experiences and adventures together — and, you know, the meals and flights and hotels that come with them — are absolutely gifts that I love to give him, they are never enough of a gift to appease many adults who equate “a fantastic Christmas” with “25 wrapped-up toys under the tree.” Nor are they good enough for the commenters of the internet (who, by the way, are pretty consistently angry that I dare to write about my life/family at all — never mind that this is my full-time job and the only way I can afford to feed my son, let alone buy him “gifts.” Oh, the irony.)

Time and experiences and adventures together are gifts that I love to give my son. But they are never enough to appease adults who equate “Christmas” with “25 wrapped-up toys under the tree.”

I spent the first holiday of my kid’s life with nobody but the folks who happened to be chilling at Roosevelt Hospital in 2015. And that was an amazing Christmas. Since then, we’ve become more mobile (this pandemic year notwithstanding), but that doesn’t change the fact that I don’t want to come back from our holiday travels with more stuff. It also doesn’t change the fact that I don’t want my son growing up with the misconception that holidays are about buying — or the expectation that people will buy him things when he already has plenty.

It’s amazing how much vitriol this approach inspires from both sides. There are the parents who insist I’m depriving my child by putting him in $2 Vans (Vans! Such deprivation!) from Goodwill, or by not buying him three different types of swinging chairs/play gyms as a baby, or who are convinced that he’ll be developmentally behind because he never had an “activity center.” Then there are the parents who call me a materialistic fake minimalist because I spend money on airfare and hotels — and had the gall to acquire an entire secondhand wardrobe, stroller, car seat, crib and carrier for my baby (honestly, I tried to get away without a car seat and just take the subway home; the hospital wouldn’t let me).

So yes, angry parents of the internet, you’ve got me. You’re all correct! Both complaints are true. I’m not a minimalist; my son has plenty of things that he could “survive without” — all of his books, a set of blocks handmade by my brother, five pairs of secondhand shoes instead of just one, and my entire childhood wardrobe from 1989 that my mother has kept in her basement all these years. And yes, I’ve also “deprived” my child by refusing to purchase multiple brand-new expensive toys that I truly believe he doesn’t need. But guess what? He seems to be doing just fine.

Actually, no, I take that back. This is a kid who at 2 years old knew all the words to both Louis Armstrong’s “What a Wonderful World” and “I Wanna Be Sedated” by the Ramones. He’s been in full-day school since he was 2, and he’s so emotionally intelligent too. Case in point: When I was just learning the ropes as a single mom, I got the flu. It was my first bout of real sickness in my new hometown, with no family or partner to ask to watch the kid for a few hours. And what did my barely 3-year-old son say to me, with such earnestness and love in his solemn little blue eyes?

“No!” I said, ashamed and appalled that he would feel such responsibility. “I’m the mom! I take care of you.”

“Okay then,” he grinned, “we can take care of each other.”

I may be, according to the comment thread below, a “lazy mom” who “deprived” my kid, never bought him anything and in general only “half-assedly” planned for his entire existence — but this kid is my whole entire life. And he’s way, way better than “just fine.”

A version of this story was originally published in December 2017.