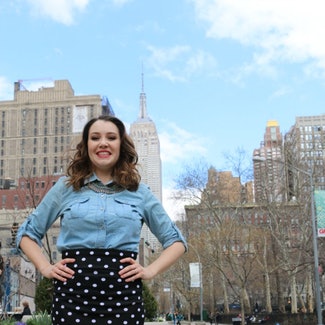 A couple of weeks ago, I visited family whom I love dearly and only get to see a few times a year. Some relatives were meeting our daughter, who was about to turn 1, for the first time. In between the “awww-she’s-so-cute” remarks, I was asked quite a few parenting questions that were a little too personal — and borderline intrusive.

One question that kept coming up, over and over again, was whether we were using a pacifier for our little one (we were) — and when we were planning to take it away. She was, after all, turning 1 in a few days. I honestly hadn’t thought too much about it yet, but their prying forced me to. In fact, I started thinking about my little one’s start with her pacifier — which we’d brought in the hospital bag before she was even born. Oops. Was that mistake No. 1?

More: 10 Surefire Ways to Piss Off a Pregnant Woman

My eldest son, now 8 years old, had no problem tossing his pacifier in the garbage can at around 14 months like it was the most effortless thing in the world. His little sister, on the other hand, relied on it a little bit more to help soothe her to sleep for naps and at bedtime. The pacifier situation was also a running joke with my siblings; the youngest two had a horrible time getting rid of theirs — even at age 3 — and would often be found in their bedroom with their “secret” stash. Outcome? They both ended up with braces.

Dentist Sabrina Magid Katz says that some doctors and organizations advise against pacifier use, at least early on, because they can cause ‘nipple confusion’ and interfere with early breastfeeding.

“Pacifier use is associated with early weaning of breastfeeding and may be an indicator of breastfeeding difficulties,” continues Dr. Katz. “That said, pacifiers can help a breastfeeding mother when used for limited circumstances and short periods of time. In addition, the non-nutritive sucking of pacifiers has been shown to be beneficial to neonates and decrease hospital stay [length].” Overall, the most standout things that can happen with prolonged use of pacifiers are “cavities, poor tooth position, improper jaw development, and improper tongue habits,” Dr. Katz adds.

However, that doesn’t mean we need to avoid pacifiers completely. “To some extent, pacifiers are a parenting decision,” says Dr. Katz. “As a mother myself, I understand the need to help soothe a baby. In addition, while an official recommendation can’t be made, some studies indicate pacifiers may help to prevent SIDS. Others show they may provide some pain management during painful procedures in neonates. Pacifiers are also easier to take away than fingers, so it may be easier to wean from pacifier use than finger sucking if the habit persists.”

As parents, there are precautions that we can take when using pacifiers to help eliminate any of the negative side effects. “Obviously, make sure the pacifier is safe,” says Katz. “Makeshift pacifiers can be hazardous, and the design and material should be tested and controlled. They should also be inspected regularly to make sure it is intact. Cavities are also a major concern, but can largely be avoided by choosing a clean [pacifier]. It should also be noted that aggressive cavity-causing bacteria can be transmitted to babies and small children. This is why we advise never to ‘clean’ the pacifier by putting it in your mouth.”

Obviously, limiting the use of pacifiers is the key to avoiding these side effects and can make a huge impact on your child’s overall health. “Studies show significant differences in bite, jaw shape and tooth positions in children who use pacifiers at 24 and 36 months compared to those who stopped at 12 months. It is also shown that the longer the use of the pacifier, in months, the stronger the association with major bite problems,” warns Katz.

And if we give in to prolonged use of the pacifier, we might be kicking ourselves later. However, Katz says there are new ways to help correct dental issues more comfortably and naturally than ever, including the use of lasers and air abrasion for cavities. That said, never ever put sweetener of any kind on a pacifier. If a regular, clean pacifier isn’t soothing the baby, it’s time to try something else entirely.

Knowing what I know now (and as keen as I am to avoid future dental bills), I think that age 1 sounds like the perfect time to start weaning our tot off her pacifier, just like we did with my first child. While I felt judged by family members (this is still a decision between my husband and me that really doesn’t include them), at least their questions spurred us to have that conversation — alone.