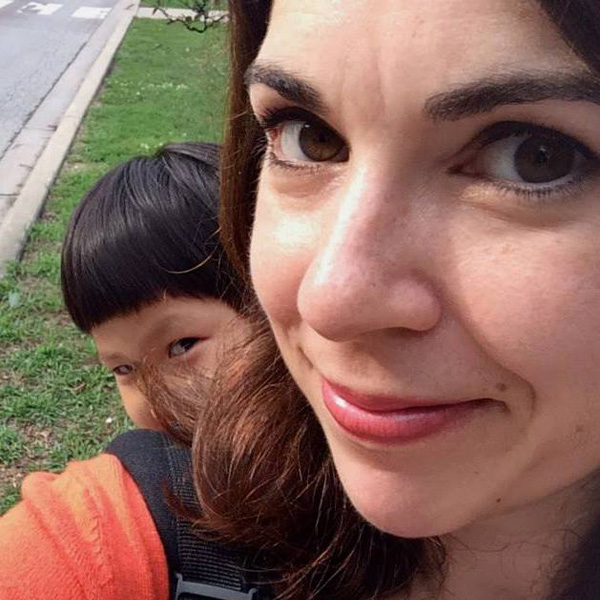 The soccer ball is on the neighbor’s garage roof again. As my 6-year-old son improves his drop-kick, practicing in the alley sometimes leads to hauling out the ladder. Part of the fun is watching my husband balance on the top rung, a long stick in hand, nudging the ball back down.

Such is life when your kid plays in an alley. It’s a wide one, recently paved, lined with ivy-covered buildings that are low enough to let in some sunlight, but still. It is not the undulating suburban yard that his cousins in Michigan enjoy, dotted with hockey goals and anchored by a swing set. It is a roadway in Chicago, and there are sometimes dead rodents on it. And man, does he love playing out there: baseball, soccer, bike-riding, remote control truck-driving — we do it all.

We’re luckier than a lot of city people in that we do have a small backyard. It’s about the size of two queen beds, and that’s where we set up the inflatable pool in the summer and build snow forts in the winter. About three blocks from our home are two playgrounds and a school soccer field and track. That’s where we go when we really need some space.

More: The 8 people every parent meets at their neighborhood block party

My son seems pretty darn happy with these arrangements. But equally as important — his parents are happy.

The move to the suburbs is a common migration for many couples: come to Chicago in their 20s, enjoy a few years of city life, have a baby, maybe two, and when kindergarten is in sight, head for suburbia for a bigger house, better schools and a yard. It’s a natural progression — and for some, a sacrifice made for the good of their children. Many parents seem wistful about leaving the city or talk about when they’ll return as empty nesters. It’s as if they feel they’re required to move because “responsible parents don’t raise children in a city.” I want to pull them aside and say, “Pssst. Guess what. You could actually stay!”

Proof? There are close to 700,000 people age 18 or younger living in Chicago. Now, not everyone’s experience in the Windy City is the same. There are vast differences in quality of life depending on where you live. My son’s experience is not the same as a boy living in a neighborhood torn apart by violence, poverty and drugs. (Although many non-Chicagoans seem to equate the city with those areas only. “Is it… safe where you live?”) For families in those neighborhoods, moving to a suburb may have a very different meaning.

But many Chicago children are thriving, just like their suburban counterparts. In our neighborhood, kids go to good schools, they play park district sports ($32 for eight weeks of soccer), they run around outside, they have lemonade stands. They might spend their summers at the Lake Michigan beach just blocks from home or at day camps for sports or languages or science or art or at outdoor festivals celebrating China or Puerto Rico or Poland.

I won’t say that urban parenting is always easy. It can be challenging to find quality education — especially the free kind. Traffic and parking are as bad as everyone says. Maneuvering a stroller onto a bus in the winter can induce sweaty panic. Children have less freedom to safely wander. There’s never enough closet space. And then there’s the soccer ball on the roof.

But for us, it’s worth the challenges, and it comes with huge benefits. My son goes to school with all sorts of kids — different races and ethnicities, different family structures. He loves riding the bus and train, where he’s exposed to all sorts of people. He hears multiple languages every day. He can ride his scooter alongside us to the grocery store, the library, the toy store, his dentist, music class, the pool and scores of restaurants. He understands what panhandling is. He sees women in chadors. He knows women who are married to each other.

He can learn to play Korean drums or visit a Korean market (which is especially valuable because he’s Korean). He can eat Cuban, Japanese and Middle Eastern food. He’s already visited more museums than I had when I started college. He has definitely been exposed to a much greater variety of experiences than I ever was as a child. We hope that he’s going to be more open-minded, well-rounded, intrepid and curious as a result.

On top of all this, my husband and I are just city people. For so many reasons — because we can walk everywhere and live simply in a smaller home and be part of such a big slice of the world. We won’t sacrifice urban life for suburban life, despite the bigger yards and better schools. The stimulation and just plain old interestingness of this lifestyle keep us here. It’s a rich experience that I want for my child, but also for myself. So we unfold the ladder and climb up once again, balancing the hassles with the joy.