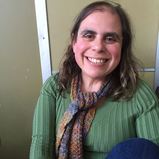 My hospital room has a west-facing view. Peer closely enough and you may be able to fool yourself into thinking you can see the cottage where I live with my husband, our two dogs and, once we are discharged, our son.

Baz was born less than 24 hours ago. An unplanned pregnancy, a shockingly healthy gestation, an early onset of labor and emergency C-section brought Adam and me a porcelain-skinned, chameleon-eyed bundle who already seemed mellower than his fellow newborns. I spent the first night of his life holding him, playing songs off YouTube: Bob Marley, The Beatles, James Blunt. You’re beautiful, I sang into his unblinking gaze. You’re beautiful, it’s true.

More: Her son’s tantrum has gone viral, and she wants you to know a thing or two

Now it’s a quarter after two in the afternoon, the heat outside in full effect. “It’s Indian summer,” I tell my son. My what? He yawns in response.

I used to give my mother at least an hour of my time each day, listening to her spew out all manner of drama ranging from work difficulties to the looming threat of Muslim immigrants. A victim of this unfair and unjust world, my mother coped by crafting extraordinary and wide-ranging monologues to which everyone was invited. Somehow I became the most frequent attendee at those parties. For some reason I thought I could save her.

That belief led to hours-long conversations whose negativity left me feeling ill. There was always some chaos, some drama. Her house was in foreclosure. Her thumb was broken. Her dog — a rescue I’d saved and brought to her upon her request — was a barker and it was riling up the neighbors.

Then I got pregnant. No longer was I willing to wind up in the fetal position with my phone balanced atop my ear, teeth gritted, stomach sour. There was a life developing inside of me, a being directly affected by everything I experienced.

So I cut her the way I cut every other toxic addiction: alcohol, cigarettes, pot. Pregnancy accomplished what neither my therapist nor my husband could: I minimized my contact with my mother. I ignored her multiple calls and left her lengthy emails unread. At 41 years old, I was finally cutting the painful and frayed tie that connected us.

Then this, today, right now: my phone playing the Marimba, its default sound. I watch it spin for a minute, determined. I will not let her intrude into this scene. Adam protected me from her call when I was still in recovery. How the hell she managed to get patched into there was beyond me, but it doesn’t matter. I’m not going to —

More: This baby shower cake is not for the faint of heart (or stomach)

“Hey,” I say, instinct having apparently taken over my body, muscle memory of the most heinous kind. For a moment I feel my heart notch up in that old rhythm; my fingers begin to curl inward, nails itching to dig into palms.

Then I look down: new life, fresh optimism. He has emerged and it is my responsibility to show him happiness, a heartfelt and hopeful way to live.

It is a quick calculus.

Blink and we find ourselves nine months later. Enough time to have incubated a new life, and in a way I have done just that. I no longer allow my mother to make me sick because I need to stay strong for the work ahead.

That means turning away from my mother’s dark toward Baz’s light.

More: We don’t have to be friends just because our kids play together

That means ignoring the call.

Someday that lesson will be complete.