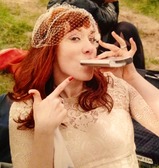 For the first 18 years of my life, my history was solid. Adolescent angst aside, my life in Western North Carolina was fairly uncomplicated: I had happily married parents, an older brother and a bird dog or two. Though my parents were incredibly strict — even by small-town, Southern Baptist standards — I was happy and enjoyed a close relationship with them.

Then I began having flashbacks of my brother molesting me, and I was annihilated.

These flashbacks coincided with my attending college away from home on scholarship. University counselors told me that the abuse had been so traumatic that I blocked it completely from my mind for years until it was safe enough for me to remember. Everything I knew, everything that was familiar and mine and precious and complicated, was destroyed. My family bounded me to myself, my life. Now, in its dissolution, it crushed me under its terrible weight. Though it took me more than a year to muster the courage to do it, I knew I had to tell my parents.

From what I could piece together from my memory, my brother was at least 16 when he molested me, and I was roughly 9. My mama initially responded that my brother “was too young to know what he was doing was wrong.” My daddy stoically took in the news and promptly went to bed; shortly thereafter, I could hear him snoring. Everything I believed about my family was shattered. Like a flower in reverse, I withdrew from them, becoming smaller and smaller. I tightened and folded into myself until the only thing left showing was an unremarkable, prickly exterior.

I felt as though I’d been erased. As such, I maintained my geographic and emotional distance.

More: I was homeschooled — which is exactly why I won’t do it to my kids

Through therapy, feminism, work in rape crisis centers and time, I made it through the rawest heartbreak of healing. I slowly began to understand how impossible it was for my rural, working-class, uneducated parents to deal with; they simply didn’t have the skill set. Without a lot of work and professional help for all parties, no one does. Who could possibly handle this kind of devastation unassisted? No one, but certainly not people like my parents.

Even though I understood this, I could never shake my feelings that my parents had deserted me. My brother admitted to everything. Members of our extended family knew, yet he wasn’t disowned or shunned. It felt like everyone chose him. It wasn’t until two decades passed and I created a family of my own with my husband that I began to feel some sense of optimism and security about family.

When I had my daughter, I had no hopes or illusions that she would magically transform my relationship with my parents. Yet, like a hand stitching a quilt, she pieced us back together. Slowly but surely, my parents and I began talking more, until it became a daily thing. I shared pictures and tales; whenever possible, they drove from two states away to come see us.

Seeing my parents with my daughter during one visit opened my eyes to how my brother’s actions wounded them. They are two well-meaning people who still, in my daddy’s words, have a “torrid love affair” after more than 40 years of marriage. All they ever wanted from life was to be together and raise a family. I’d seen pictures of them in their youth, of course, but with my daughter, I could truly see them as they once were, as my husband and I are: young, vibrant, madly in love.

More: What it’s like to grow up knowing you were an ‘oops baby’

Knowing as I do, in my marrow, that my daughter could never do anything to make me stop loving her, I related to them as a fellow parent, rather than as their child. I understood for the first time how agonizing this has been for them. If I were in their position, what would I do? I would love both of my children. I would be consumed with guilt.

I’ve felt gutted when I’ve accidentally hurt my daughter or was unable to prevent or fix any injuries. I can only imagine how excruciatingly painful it would be to juggle guilt, love, rage, resentment and deep sorrow. Each of those feelings on its own would be enough to cause anyone deep anguish and distress — and combined, it sounds simply horrible; maybe akin to what I suffered at the hands of my brother.

More: The ‘M-word’ we need to be careful using in front of our girls

I never blamed my parents for the abuse, only my brother. But I did blame them for the way they responded to it. I see now they acted with pure intentions but shoddy, ineffectual methods. I’m no longer mad at them. They now accept and respect my boundaries, which include no contact with my sibling.

My brother ravaged my nuclear family, and it will never be restored. To save myself, I had to get away from them, yet I always grieved the distance between us. My daughter has done the seemingly impossible: exhumed and restored my relationship with my parents. While it will never be perfect, it is ours and it is beautiful.

16 hrs ago
by Anna Davies