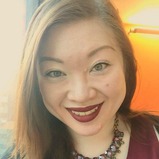 People have always stared at me, but I never noticed until someone pointed it out. I guess my eyes would be drawn to someone who looks different, too. But for the longest time, I didn’t realize I was that someone who looked different.

My parents are Chinese and they look like you would think they look: dark hair, brown eyes and tan skin. However, somehow I ended up with naturally blond hair, blue eyes and pale skin.

Growing up, I didn’t think about how light my skin tone was or how I didn’t look like other kids. I didn’t even think I looked different compared to everyone else. Neither of my parents had blond hair, blue eyes or pale skin. Only one other person in my family has my coloring. Still, I thought I was just like any other kid.

More: My kids just don’t understand why mom gets racially profiled at the airport

I didn’t realize I looked different until I got bullied.

I don’t think I fully understood the word “bullying” at first. I was walking down my middle school hallway during a passing period when I saw two familiar figures. They were boys who were always loud and rowdy. I happened to make eye contact with one of them. They weren’t speaking in full sentences, but just shouting things in my direction. All I heard was, “Chink,” “Albino” and “Albino-Chinese” mixed in with laughter as their crowd went one direction and mine went another. It took me a second to realize their words were meant for me.

I don’t remember learning about bullying at home or in classes. We had assemblies and were taught that we should treat others the way we’d want to be treated, but I don’t think that was enough. At the time, I didn’t know how someone became a bully or why. I also didn’t know how to recognize bullying until after I was bullied. Apparently this is fairly common. The Pacer Center, a non-profit for children with disabilities, warns parents that their kids may not know they’re being bullied because they think they need to be physically hurt for it to count.

The next time I walked down that hallway and spotted them, they did it again. This time, they said the same words in what appeared to be a Chinese accent. They were loud enough for everyone around us to hear, but no one did anything except stare and continue walking. I thought they were just teasing me and calling me names, but didn’t recognize that this was bullying.

It just kept getting worse. The next time we met in the hallway, they performed their same routine but had a couple of additions. They crouched down as they walked to appear shorter and pulled the skin around their temples taut so that their eyes appeared smaller.

I’ve lost track of how many times this happened. It moved from that same hallway to elsewhere on campus. They’d taunt me whenever we’d cross paths.

I didn’t know what to do. I didn’t go home to tell my parents because what could they do? They don’t really look like me, so how could they empathize? How could they help me from home? I didn’t think I’d be able to muster up the courage to tell them what was happening because I felt so ashamed and scared. If I told a teacher, I’d be a tattletale. In fact, only 20 to 30 percent of kids report bullying to adults. A full 64 percent of bullied kids never report it to anyone. None of the other kids who heard this going on did anything, so was it all on me?

Yes, it made me cry at night, and yes, it made me wonder what was wrong with me. I experimented with bronzer for darker skin, but I just looked like an Oompa Loompa. I’d apply colorful eyeshadow or mascara in the hopes of looking less pale. I’d wear platform Converse or heeled flip flops so I could be taller. But nothing I did stopped their mean words.

I told myself that I should confront them and make them stop, but I was too afraid. I was (and still am) the quiet, shy girl who’s afraid to speak out in class or in a large crowd. But one day, I just had enough.

It was all a blur, but I was walking with my best friend around the outdoor lunch seating area when the boys said whatever they usually said. Usually, I felt embarrassed and ashamed of how I looked and afraid of what they could do to me. But this time, I was just enraged. A switch must have flipped on inside me. I don’t know what I said or how I did it, but I went up to them and just yelled (it sounded like yelling in my head, but I’m sure I just spoke at a regular volume). I don’t remember what happened after besides them laughing and walking away. It was like my words meant nothing. It was like my feelings were worthless. If they were going to pick on me and laugh at me no matter if I responded or not, what was the point? What could I do? I was stuck.

I didn’t find out until months later that a girl I wasn’t particularly close with went to the principal about the boys. I couldn’t believe it. Someone stood up for me? Someone had the courage and voice that I didn’t have to tell an adult what was happening? The principal must’ve spoken to the boys because they didn’t bother me again in middle school.

I was floored with emotions that I didn’t know how to express. Until this day, I don’t think this girl knew how much of an impact she made on my life.

Little did I know, these two boys were also going to the same high school I’d be attending. The first time I saw them in the high school hallways, I stopped in my tracks. “Oh, no,” I thought. “What now?” Would they still make fun of me? No one is stopping them and I didn’t have that girl to go tell the new principal for me now.

They did still call me names, but they were more tame this time. One of the boys had a locker in the same row as mine. I don’t remember our exchange, but he said something to me one day. I looked at him and spoke to him in a conversational tone. I think he was surprised that I was talking to him. He seemed at a loss for words and uncomfortable. After that, I didn’t really see much of the boys anymore. It’s like they disappeared from the face of the earth.

When I didn’t have them pestering me anymore, I had more space in my mind to think about who I was instead of worrying about who they thought I was.

For the longest time, I wished I had different facial features. I wished I didn’t have almond-shaped eyes, such a round face or a flat and wide nose. I can change my hair color all I want, but I’ll still always be that same shade of blond. I can apply fake tanner, but it’ll only look unnatural. I can wear heels, but I can’t make myself grow taller.

I tried so hard to fit in, but nothing worked. So why fit in when I already stand out? Now, I like how I look. I may not have a celebrity doppelganger, but I don’t look like many other people, and I think that’s special. Instead of rejecting what I was given by birth, I decided to embrace my differences. Looking unique makes me memorable.

Being bullied shaped me into who I am today. Obviously, I’m against bullying, but I’m stronger today because I had to overcome my bullies. The self-exploration gave me the courage and strength I needed to stand up for myself and move on from the pain it caused. I’m glad I don’t see those boys on a daily basis anymore, but once in a blue moon, I wonder what I’d do if we’d ever cross paths again. I imagine I’d panic for a second the moment I spotted them. But the only difference is, I’d know that I’m OK. At this point in my life, if they said the same words to me, I wouldn’t be as hurt. I also wouldn’t just keep walking. I’d go up to them and strike up a conversation.

I am not an exotic bird. My ethnic background and physical features aren’t all that define me. The way I look makes me who I am, and I’m OK with that.

Why don’t bullied kids tell their parents what’s going on? We asked the SheKnows #HatchKids to decode what’s going on inside kids’ heads when they decide to keep quiet about the pain of bullying. Check out their video above.

9 hrs ago
by Racheal Pulver