A Victorian woman was subjected to something no-one ever wants to face: She was reportedly forced to listen to the foetus’ heartbeat before being allowed to follow through with an abortion procedure.

More: Jemima Kirke shares an abortion story many women can relate to (VIDEO)

The unnamed woman took to Tumblr to post a public service announcement, titled “PSA for women seeking an abortion in Victoria, Australia,” before giving an account of her horrific experience.

She wrote, “You are required to have an ultrasound (usually an internal ultrasound) before you can have the procedure done. If the ultrasound doctor/technician tries to tell you that the law requires them to make you look at the ultrasound and see/listen to the foetus’ heartbeat this is a lie and you should complain.

“It is not law in Victoria to see the foetus before electing to have the procedure. I don’t know what the law is in other states, but this is definitely true of Victoria.”

More: The Mamafesto: New Tumblr shows that you can be a parent and pro-choice

She went on to reveal that she was recently manipulated by two doctors at a public hospital who “forced” her and her partner to not only watch the ultrasound, but also listen to the heartbeat, which they brushed off as being part of the law. These actions resulted in the woman and her partner becoming so emotional that she was unable to go through with the procedure.

The effects of this have allegedly been devastating, as the woman reveals she did not “feel safe having the procedure at the hospital,” adding, “I had to wait two more weeks (I’m now dangerously close to the cut off date for abortion) and I now have to pay almost $500 with no medicare rebate and have to endure harassment from protesters at a private clinic [sic].”

The woman has now gone on to research the procedure so she can share it with other women, ensuring that they do not have to go through the same painful experience. On her post, she has clearly outlined the abortion rights in Victoria in her own words. 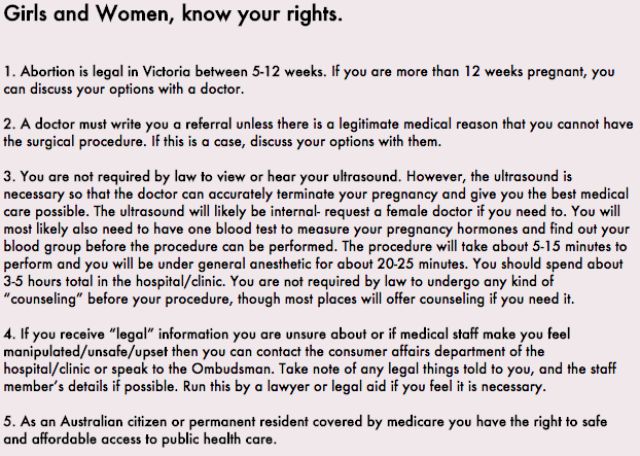 For more information, you can also visit Family Planning Victoria‘s website, Children by Choice and the Better Health Channel. If you are in need of counselling, support or advice, The Women’s offers a free and confidential support line to women.
If you are not located in Victoria, you can visit Library of Congress for information on abortion laws in other states.

16 hrs ago
by Kimberly Dawn Neumann