Happy Wednesday Hump Day — also known to us as Celebrity Baby Bump Day. We rounded up the cutest pregnant celebrities of the week starting with The Vampire Diaries star Candice Accola, who shared the sweetest pregnancy announcement. Pregnant Kim Kardashian rocked the VMA Awards in a safari-inspired dress, while Yahoo CEO Marissa Mayer announced she is pregnant with identical twin girls. Coco Austin and Jessie James Decker round out our list of the most buzz-worthy baby bumps of the week. 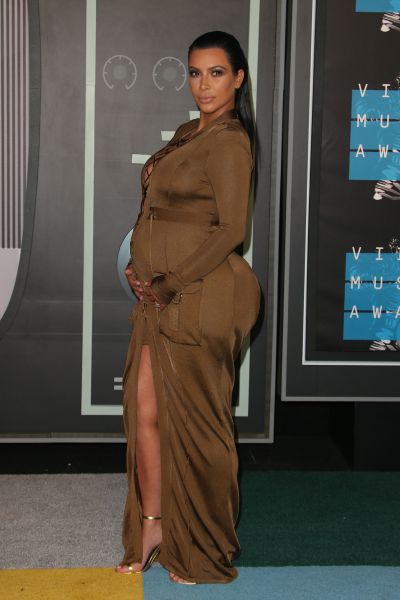 Kim Kardashian showed off her pregnancy curves at the 2015 MTV Video Music Awards in a safari inspired lace-up Balmain dress. In case you missed it, safari and military-inspired clothes are the hottest fall trends for both the pregnant and non-pregnant set.

Kardashian, who is expecting her second child (a baby boy) in December with Kanye West, showed off her sixth-month bump as she walked the red carpet.

The 34-year-old shared this photo on her Instagram page as she cradled her baby bump during the show.

The pregnant reality star came out to support Kanye, who was given the Video Vanguard Award — for which he made a bizarre and rambling speech saying he would run for president in 2020.

Next up: Surprise! Yahoo CEO Marissa Mayer is pregnant with identical twin girls

6 hrs ago
by Katie C. Reilly